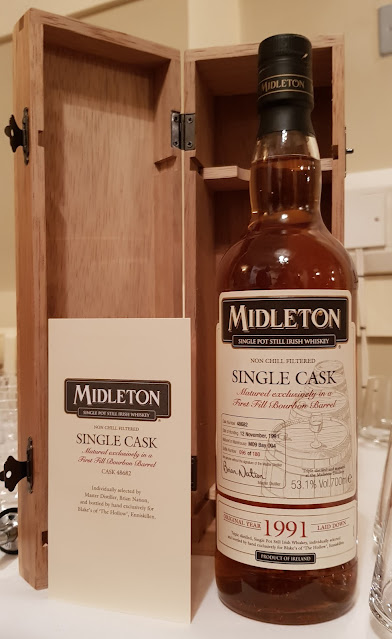 My fellow Malt scribe and palate extraordinaire, Dora, and I have been chatting a lot recently through the magic of Instagram. Occasionally, once we get past topics of great importance such as why Dora only likes green Jelly Babies, we talk about more mundane things like whisky and of course, Malt. Dora asked where I get my inspiration from for my Malt articles? Like myself, Dora struggles with the niggling fear of becoming too 'samey' in our pieces. This is especially true when the likes of Adam, Taylor and Alexandra continue to raise the bar in their work.

Not that writing for Malt is a competition; far from it, in fact, as Malt is very much a team effort. The truth is, though, that I expect we all put a little pressure on ourselves to make sure that you, the great Malt readership, doesn't get bored of our antics. That means we are always looking for new angles from which to introduce the whisky. For me, social media at times can be the biggest inspiration. A throwaway comment, misleading advertising or sparky debate can lead my train of thought.

In fact, for this piece here, I was in two minds as to whether I would put it on my own humble site or here on Malt, as I was indeed struggling for the elusive 'angle'. But then, like a gift from the whiskey gods, social media came to the rescue.

I received an invitation to the release of a 1991 Midleton Single Cask being bottled exclusively for Blake's of 'The Hollow' in Enniskillen, County Fermanagh. It is so named as it resides in 'the hollow' of Church Street in the town. Established in 1887 as a pub, this Victorian bar remains largely unaltered since its inception, and is a “must-visit premises” if you ever make it to Enniskillen. My family used to live there, and so we still have connections to the town. Blake's has many fond memories for myself.

I was heading for Glasgow the day after the release, so I decided to drive to Belfast, where a bus was put on to take myself and other reprobate bloggers and ne'er do wells to Blake's. In full Malt transparency, the invite included the bus journey, and also tapas and drinks before the journey in hand, as well as a Powers Old Fashioned on arrival in Blake's. As I was driving later on, I went with the soft options.

Now, being the price savvy individual I am, I immediately started thinking of what else I could get for £690. How about two of The Whisky Barrel's Glendronach 26-year old single cask releases, with £150 left over to buy five bottles of Proper Twelve? How about four bottles of Redbreast 21-Year-Old, with £50 to spare? Eight bottles of Redbreast 12-year-old Cask Strength with £10 remaining? Well, you get the picture.

But then, compared to the Adare Manor Hotel and Ashford Castle Midleton single cask releases which were between £1.5K to 2K per bottle, this release seemed excellent value.

Then came the news that Irish whiskey had lost the plot. On 25th March this year, Charlie Chawke (not the clown from kids TV in the 1990's), the owner of Dublin pub Searson's, announced the release of a 28-year-old Midleton Single Cask, bonded on 4 July 1990 and bottled in 2019 at a strength of 50.6% ABV. From the outturn of 168 bottles, up to 120 would be made available for sale to the public. The price tag? Four thousand euro!! Goodness knows how much a measure of this stuff is at the bar!

Now to be clear, Pernod-Ricard/Midleton are not setting this price. This price is being commanded by Mr. Chawke himself.

Sadly, though, there probably are 120 mad eejits out there with 4K just burning holes in their pockets that they feel would be wisely invested in a bottle of Midleton. Even sadder is that these bottles will become just that....investment pieces destined to be locked in vaults or displayed, pride of place, in someone's Irish whiskey collection. Precious few, I imagine, will actually be tasted.

I've tried to reconcile how Mr. Chawke has come up with the pricing here. Was this cask touched by the magic penalty-saving gloves of Irish super goalie Packie Bonner? Did Bono himself give his blessing on this cask? 'Ah now lads, I've finally found what I've been looking for!' Did Darby O'Gill wrestle this from the hands of Brian, King of the Leprechauns?

I can't answer any of the above questions truthfully, but like the questions, Mr. Chawke's pricing here is also out of touch from reality.

Now then, let's not get distracted from the task in hand: reviewing this Midleton Single Cask from Blake's in 'The Hollow'. Read on.

In the mouth: Lovely chewy texture to it. Honey, vanilla and crème caramel with a lovely peppery pot still spice that builds and builds. Toasted oak and clove. A mild taste of aniseed. Fruity too – nectarine, peach and banana. Water releases pear drop sweets, more aniseed and more clove spice. The finish is pleasingly long of toasted oak, spice and of stone fruit.

This is very good—really excellent, in fact—which is why it garners the score it does. But it is hard to look past the price, which is a little too rich for my pocket. Even though it substantially undercuts similar releases in Ireland, I think their pricing just highlights the madness that is infecting the Irish whiskey industry at present.

So while it is a really excellent whiskey, I can't say that it offers excellent value. In fact, I took the liberty of trying this side by side with Redbreast 21, and well, I'd plunge for the little Robin every time.