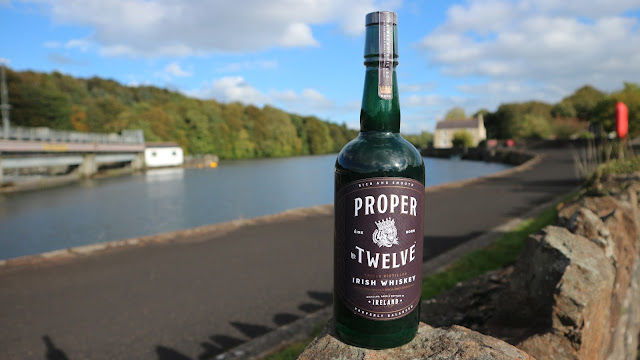 Celebrity endorsements are nothing new. Famous, pretty faces sell and brands know this, which is why they will often pay large sums of money to people, who can more than afford the product, for their help in the promotion of the said product. Cars, shampoo, dog biscuits – you name it, a celebrity will often endorse it.

Celebrity endorsements happen in the whisky world too. Mila Kunis with Jim Beam, Matthew McConaughey with Wild Turkey and of course David Beckham with the abomination that is Haig Club. These connections made to make the product even more desirable to us. If a celebrity likes Jim Beam it must be good, right?

Then there are those celebs who think, 'stuff the endorsement, I want my own brand!'. We've had Ryan Reynolds with his Aviation gin (Alexandra's all-time favourite gin), Channing Tatum with his Born & Bred vodka, Drake and Virginia Black American whiskey. The profits from such enterprises can be massive as shown by George Clooney and Randy Gerber when they sold their Casamigos tequila brand to Diageo for a cool $1 billion.

Stepping into the 'own brand' ring then is Ireland's own Conor 'The Notorious' McGregor. After his defeat to Floyd Mayweather in 2017, our Conor announced to the world that he would be launching his own whiskey, stating, "I'm going to take over the Irish whiskey market." Now that may have sounded a bit arrogant and cocky but McGregor has a habit of backing his words up with results, and you know what, he may well do it.

The thing is Conor has an instant fan base. His Instagram account has 26.1 million followers and combined with Facebook and Twitter you could probably add another 10 million to that. The official account for Proper No. Twelve whiskey had 100k followers after two posts, and as of today (23/09/18) is sitting at 219k followers after 4 posts. The photo I posted on my Instagram page after buying the stuff is by far the most liked and engaged-with post I've ever put up.

Regarding followers and engagement, he is leaving the other big Irish players in his dust. Consider the current no.1 selling Irish whiskey, Jameson. They have 96.5k followers on their global IG page and 114k followers on their US IG page. Tullamore DEW has 20.4k followers. Bushmills have 13.6k on their US IG page, their home-based pages are a lot, lot less. Even the biggest of IG influencers in the whisky world can't compete with that following, Singlemaltdaily, for example, having 88.3k followers.

In short, Conor's reach is HUGE! Even brands like Jack Daniels could only dream of having this level of following and engagement.

And judging by social media Proper No. Twelve has been quite literally flying off the shelves. So much so that UK supermarket giant Tesco has been limiting customers in Ireland to two bottles each because the demand is so high. I even got contacted by someone in Russia via IG to see if I would be able to ship a bottle to him. I honestly have never seen a frenzy like it.

Of course, whether I or other commentators give a glowing appraisal or a withering destruction of Proper No. Twelve one thing to me is already certain... this stuff will sell and sell and sell some more.

Like his bout with Mayweather, not everything has gone Conor's way. When he announced his new whiskey it was to be branded 'Notorious'. This plan was put to bed by Carlow Brewing Company who own the 'Notorious' trademark for alcoholic and non-alcoholic drinks across Europe after launching their Notorious Red IPA in 2016. Hence we now have Proper No. Twelve as the brand name. Although this may infer the whiskey is 12 years old (it definitely isn't) it actually refers to his home neighbourhood of Crumlin, Dublin 12.

Launched under his Eire Born Spirits company this is a sourced whiskey made with partner, Bushmills Distillery and is being distributed by Proximo Spirits globally. I've seen some talk online that there is no Bushmills spirit in this blend but I find that very hard to believe. I can't imagine Bushmills/Proximo allowing McGregor to feature shots of Bushmills washbacks, stills and warehouses on the Proper No. Twelve website if there wasn't any Bushmills spirit in the drink.

Now the fact that this is a sourced whiskey is of interest because our Conor featured a picture on his personal IG account about working in |his" distillery. Guess what? This type of misleading marketing worked, people bought into the fact that he has his own distillery as can be seen here. Personally, I found this a little hard to watch, not because of the material or as a reflection of the content creators, but because they had been suckered in by a false claim from Conor McGregor that he has a distillery. It just shows you the power of social media. It also firms up my belief that advertising such as this needs to be curtailed. If you don't own a distillery you should not be allowed to blatantly say you do or even insinuate that you do because people actually buy into such claims. 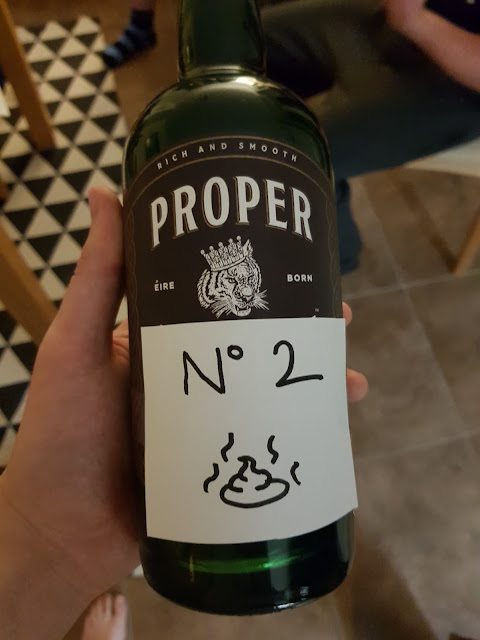 On Malt presentation from an aesthetic standpoint rarely gets commented on but I felt in the case of Proper No. Twelve that I should. For a man that likes his bling and showmanship, the presentation of Proper No. Twelve is very dull to say the least. I showed the bottle to my brother in law and the first thing he noticed was that the labels weren't stuck on right, there were air pockets under them so that the labels actually crackle and pop when you hold the bottle. The glass used in the bottle is a really weird opaque green that actually looks plastic (it reminds me of a Lilt bottle) and to top things off the bottle is 75cl even though you get 70cl so it looks underfilled. The whole thing just looks and feels... well, shoddy and rushed! The fact that Proper No. Twelve is a sponsor of his upcoming UFC bout with Khabib Nurmagomedov and will actually feature on the canvas suggests that indeed it was rushed out to maximise marketing potential - Mcgregor even managed to sneak a bottle into the UFC 229 press conference!

On a positive note and something Conor should be applauded for is that $5 from every case will be donated to first responder organisations and charities up to a maximum of $1 million annually.

So what do we have inside the shoddily presented glass vessel? A NAS blend sourced in all likelihood from Bushmills for the malt and Midleton for the grain. It's bottled at 40% and cost me £29.95 from Fairleys Wines in Coleraine. You can also purchase a bottle online from Master of Malt for £27.95. 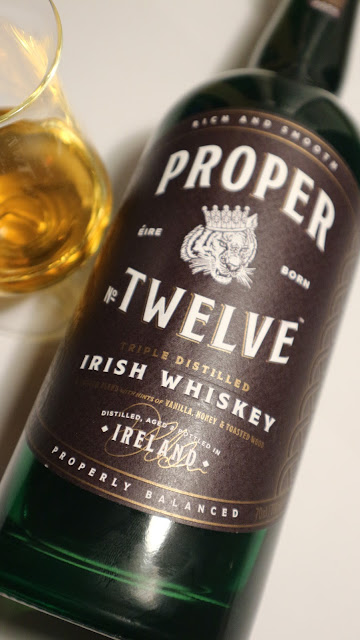 On the nose: It's pretty harsh and astringent – alcohol and young grain spirit are the first things to assault your nostrils. Pear drops, green apples, floral notes with copious amounts of nail varnish remover. Eventually, some caramel appears.

In the mouth: Young, grain heavy spirit – a very light mouthfeel, it's light to the point of being non-existent. There is some vanilla, a little honey, toasted oak and some spice heat. It takes a while but some cocoa powder can be found. The finish is of alcohol rub heat... very little lasting or memorable flavour.

When he announced his whiskey McGregor stated that he was coming in strong, with passion and with purpose. It's a shame that his blender didn't get the memo. Here we are again with another overpriced, dull, one dimensional and bland blend to add to the growing pantheon of dull Irish blends. No doubt with his sizeable following, Conor will sell loads of this juice although I'm not sure if he will get many repeat buyers. Unfortunately, I'm now left with a £30 hole in my wallet and about 660ml of whiskey that needs a new home, quite possibly the toilet but I haven't decided yet.

Comments from original post: Some of these should make you chuckle!