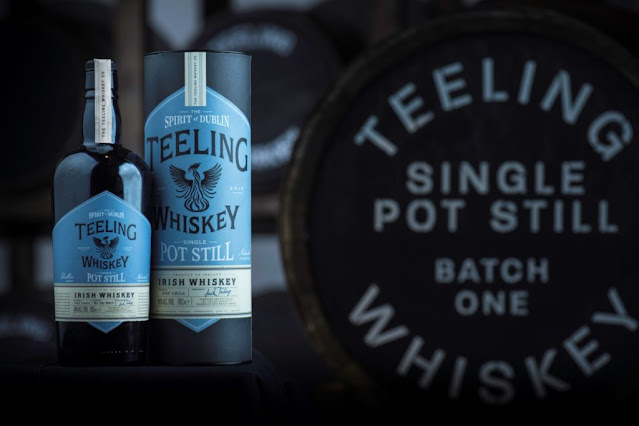 By now I'm sure you are familiar enough with me to know that although being the token Irish writer on the Malt Team that I am no cheerleader for the Irish Whiskey industry. My own personal whisky collection roughly favours Scotch over Irish two to one in number. I'm essentially here because Jason and Mark can't be bothered buying Irish whiskey and Adam's too busy exploring England's new model army of upstart distilleries between cider tastings.

No, I am here, not to publicise and kiss bum cheeks. I am here to run a critical eye over proceedings and tell you my honest opinion. It's why Malt exists and why so many of you return to read our collective material on a daily basis and to consistently interact with us. It's why I feel humbled and privileged to even write here in the first place.

Adam recently posted on Twitter musing over why in many industries including wine, literature, film and so on that criticism is an accepted part of life, yet the whisky industry recoils in horror at the merest indication of nay-saying.

My own take on this is that the whisky industry as a whole rarely receives totally honest feedback. Whether in printed format or digital there is a reluctance to really say what you think. If you do those precious samples might just stop rolling in! And of course, if you do utter an opinion that goes against the collective grain you may well be seen as the wild-eyed crackpot of the community.

The days of having to rely on industry freebies are well and truly over though. There is no need to sugarcoat opinion in fear of being blacklisted by brands. In Ireland we have a great community of bloggers and enthusiasts now and if you so desire you can spend every evening of your weekend from Friday to Sunday sharing in a bit of whisky-related banter and craic on Twitter. They are also generous souls, with samples of all sorts crisscrossing Ireland at an alarming rate.

It's this burgeoning community that shares, not only in Ireland, but all over the globe that means industry reliance and back scratching should be a thing of the past. It should also allow unfettered opinion giving.

There is nothing wrong with accepting freebies and samples from the industry – I've done it myself here on Malt, but that shouldn't and doesn't mean that I will go easy on them if the whisky isn't great... in my opinion. I think reviews such as Prizefight and Hyde to name a couple show that free whisky is no guarantee of a kind word.

Today's review is made possible because of that sharing ethic. My sample of the newly released Teeling Single Pot Still came from fellow enthusiast Jamie better know as @whiskey_jac on Twitter and Instagram. The mad eejit cracked open a bottle of this new release and actually shared it. Imagine that!

This new release from Teeling caused quite the stir here in Ireland. The Teeling Distillery was the first newly built distillery to operate in nearly 125 years when it opened it 2015 and marked the return of working pot stills to Dublin nearly 40 years after the closure of the old Powers John's Lane Distillery in the mid-1970's. Exciting times indeed.

So the release of the first 100 bottles of this Pot Still in September 2018 was a historic moment for Dublin whiskey production. Of course, this also meant that there was enormous interest generated around the whiskey and all eyes were on Teeling to see what the launch price would be. After all, we are getting used to seeing ludicrous prices for young whiskey these days, and young whiskey this is. Teeling first started distilling in March 2015 so this stuff was little over 3 years old.

To be fair to Teeling they came up with a novel plan. The first 100 bottles would be sold at auction with all profits going to local Dublin charities. You are all probably well aware that bottle no.1 sold for £10,000 breaking the world record for the most expensive bottle of whiskey sold from a new distillery. Crazy, but at least the charities did well out of it.

The first commercial release of the whiskey came with the launch of Batch 1 in its striking blue livery in October 2018 at, for me anyway, the surprisingly low price of €55 and limited to 6,000 bottles. Kudos to Teeling for selling it at a reasonable price. Such is the interest in new Irish releases they could easily have sold this for double the asking price and I doubt many would have batted an eyelid.

Comprised of a mash bill that is 50/50 malted and unmalted barley this whiskey has been matured in virgin oak, ex-bourbon and ex-wine casks. It's natural colour, non-chill filtered and bottled at 46%. All good so far. 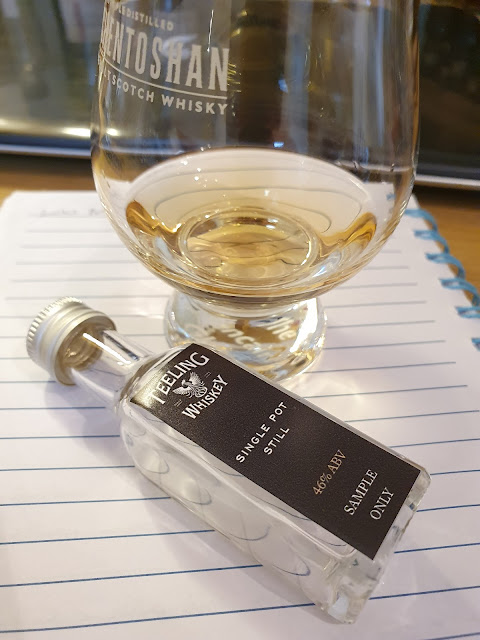 On the palate: Like the nose this is very soft on arrival. Melon, grape, unripe apricot and a lemon and lime tartness. Then damp cardboard and envelope glue mid palate before a gradual release of pepper and pot still spice. Again it all feels very new make spirit. The finish is very short, slightly metallic with lemon and grapefruit peel.

This is a release that many Irish whiskey fans have been fawning over but I'm going for the wild eyed crackpot viewpoint here... a position I'm more than comfortable with as the grumpy one of the Irish whiskey blogging world.

I can understand the enthusiasm to release this considering the lack of any whiskey being distilled in Dublin for so long but I just wish that Teeling had shown patience as this does not showcase what they are doing terribly favourably. It is just too young and under matured. Even the casks haven't been terribly interactive with the spirit.

Certainly not as accomplished as the Dingle First Release Pot Still and I found that to be wanting. I think that this should be an example to other start ups here in Ireland... bottle when it's ready, not before. Take a leaf from the Echlinville book. They have stock that is now 5 years old but are still showing no signs of releasing their own distilled whiskey, rather they intend to bottle when they feel it is ready which I think is very commendable indeed.

The Teeling Pot Still shows promise though. Once it gets to 10 years old or thereabouts I think we'll see a whiskey worth drinking. Unfortunately, this release has left me very underwhelmed.