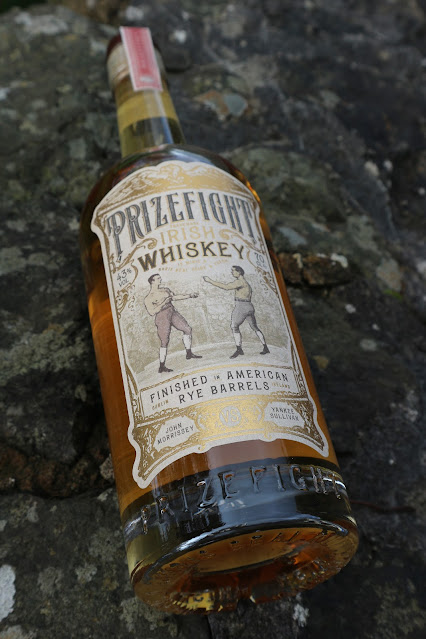 Before we get this article into full swing it is, of course, fitting that we give full disclosure on this bastion of openness and honesty. The lovely people behind Prizefight Whiskey didn’t just provide a sample, they provided me with a full bottle no less, plus a rather nice t-shirt, a few coasters and three packs of branded matches. So a heartfelt thank you to Prizefight Whiskey for their generosity.

Barry ‘The Clones Cyclone’ McGuigan, ‘Dangerous’ Deidre Gogarty, Carl ‘The Jackal’ Frampton, Katie ‘The Bray Bomber’ Taylor, Conor ‘The Notorious’ McGregor and Barry ‘The Blender’ Henderson! Individuals who were or are handy with their fists, shins or a combination of both to hand out a good pasting to their opponents and getting their hands on shiny World Title belts, all helping to cement Ireland on the world stage as the home of ‘the Fighting Irish’!

Ah yes, ‘the Fighting Irish’. It’s one of those stereotypes that still afflicts Ireland today, the western Atlantic notion that after a few jars of the black stuff that we can’t wait to knock someone’s block off outside our local imbibement emporium because they spoke a few unkind words about our neighbours' dog! It’s up there with the notion that we still have shillelagh toting leprechauns at the bottom of our gardens taunting us with unobtainable pots of gold, that all Irish cuisine revolves around the potato (and while we do love the humble tuber, so it would seem so do most of the other starchy carbohydrate loving countries around the world. I’ve yet to travel anywhere in the world where a potato isn’t easily available on the menu), and that we all customarily greet each other with a hearty ‘Top o’ the mornin’ to ya’! (On a recent trip to Canada I recall one local being utterly despondent that this genuinely is not a thing – it is to Ireland what Dick van Dyke is to Cockney Chimney Sweeps.)

To celebrate our aptitude at brawling, gloved or bare-knuckle, Pugilist Spirits have concocted Prizefight Whiskey. Here’s the marketing blurb:

When Flor Prendergast decided to create a whiskey, he brought in his American friend and spirits maverick, Steven Grasse, who had an idea that required a transatlantic collaboration: whiskey from Ireland, finished in rye barrels from America. They formed Pugilist Spirits to bring this idea to life, with whiskey distilled and aged in West Cork, Ireland and rye barrels sourced by Grasse’s own Tamworth Distilling in the U.S.

Inspired by the Irish-American connection, Grasse had the idea to call the whiskey Prizefight. The brand tells the incredible stories of the Irish who came to America and became the greatest fighters of their day. Each bottle commemorates the boxing legends who came with nothing and fought for everything.

I take from the above that there will be a series of bottlings that will each focus on different ‘Fighting Irish’ legends who made it on the mean streets of the new world. This initial release focusing on a fight between John Morrissey and Yankee O’Sullivan in New York in 1853. Packaging wise it certainly looks the part and I’m sure our American cousins will lap up the storytelling, especially on the North East Coast. Of course here at Malt stories aren’t really our thing, we want to know about the whiskey.

Other than the story the brand is trying to create there is very little info about the whiskey itself other than that recorded in the above marketing piece. It is distilled by West Cork Distillers (no info about being a blend, grain or malt. Although on the web a little digging did indicate that it may be a 6 year old single malt) that is finished in ex-rye barrels for an unspecified period of time. It’s bottled at 43% ABV. That’s it, folks. 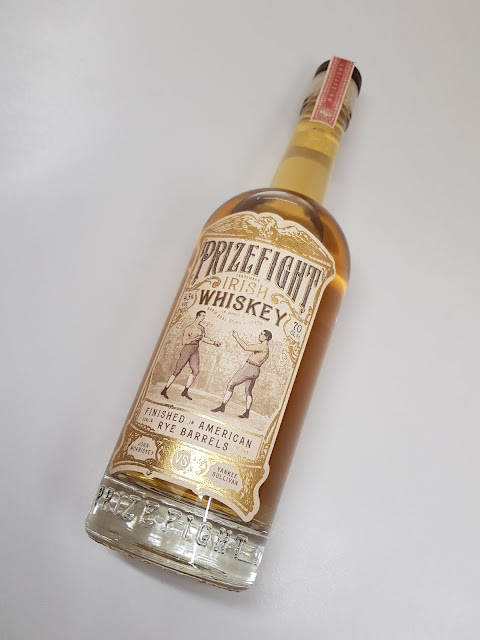 Nose: Definitely floral with some alcohol sting. Parma violets, fruit salad sweets, lemon meringue with the rye kicking in at the end producing nutmeg and ginger aromas with a little oak.

In the mouth: very thin mouthfeel even with its 43% abv with a soft arrival, no real explosion of flavour. This is not an overtly sweet whiskey, honey and vanilla arrive subtly. The parma violets make an appearance followed by ginger, oak and a little alcohol heat leaving a short residue of clove oil and oak.

Certainly not a bombastic or heavy hitting slugger of a dram, more of a timid sparring partner, unfortunately. The whiskey smells, feels and tastes young....it's sharp, new make-ish and the spirit struggles to present itself clearly, to me it comes across as a grain driven blend (although Prizefight please correct me if I’m wrong).

Cask influence too is weak, this whiskey has the feel of extensive refill barrel use here as even the usual ex-bourbon barrel characteristics of caramel, vanilla, toasted nuts and oak struggle to assert themselves. The rye finish, although novel seems like more of a polish than a finish as it doesn't impart enough flavour. Interestingly the Prizefight website lists a few cocktail ideas to try out and I think that this is where this whiskey is better suited, as a cocktail base rather than a sipper.

At €49.99 per bottle (that's around £45) Prizefight are charging a fairly premium price that unfortunately the liquid fails to live up to....at that price bracket they are aiming at Knappogue 12 year old, Jameson Black Barrel, Teeling Single Malt, Green Spot, Bushmills 10 just to name a few and unfortunately the Prizefight fails at the weigh-in.

Due to fancy packaging and clever marketing, I'm sure that this will sell a bucket load over the other side of the pond, but if you are looking for flavour from your dram then there are many other Irish contenders that pound for pound, offer a much stronger flavour punch.