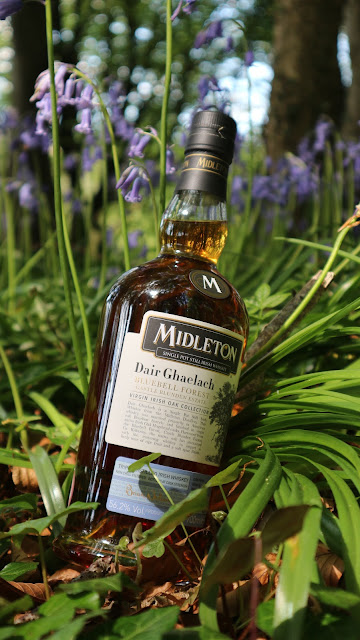 A few weeks ago an email arrived in my inbox that immediately piqued my interest. An invitation to be among the first in Ireland to taste the new Midleton Dair Ghaelach release and not just one bottle either, no, attendees would get to try all 6 variants being released. Without further ado, a hotel was booked and the date set in the calendar.

Fast forward a few weeks and its a cold, wet, blustery Monday night in Belfast. Nothing truly unusual about that set of circumstances. Before me, I have an arduous journey of about 100 yards to make my way from my hotel (a premier inn) to the opulent grandeur of The Merchant Hotel, tonight's tasting venue.

For those of you unfamiliar with Belfast, The Merchant Hotel is located on Waring Street in Belfast's now buzzing Cathedral Quarter. Originally the headquarters of Ulster Bank in Northern Ireland, designed in 1858 by Glasgow architect James Hamilton and built in 1860 in an Italianate style it fell into disuse in the year 2000 when Ulster Bank moved their headquarters to Donegall Square East. It was bought and renovated by local hotelier Bill Wolsey who reopened the building as a hotel in 2006, which must have taken some cojones as Belfast wasn't really seen as a premier tourist attraction back then. Anyway, Mr Wolsey's steely nerve has paid off and now The Merchant is in the centre of the rapidly regenerating Cathedral Quarter where a new bar, club or eatery opens on what seems like a weekly basis and where any given weekend its flooded with locals and tourists alike having a bit of the 'craic'. 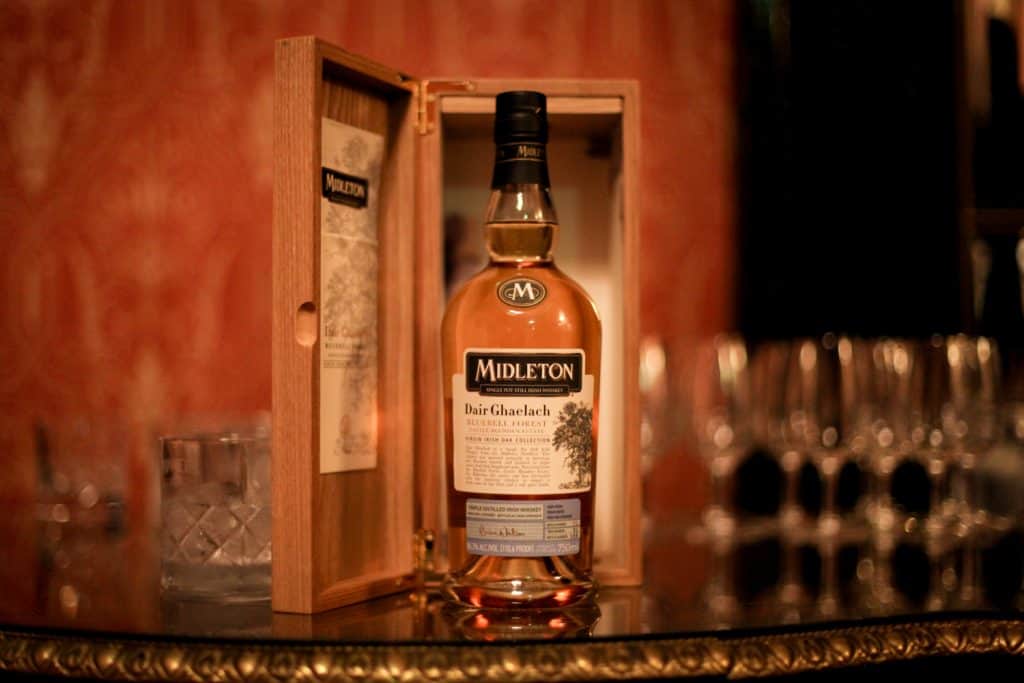 After my travails crossing from one side of Waring Street to the other I swept through the Merchants main entrance and into the Cocktail Bar, the holding area before our final destination. The cocktail menu in the Merchant is excellent and if you ever visit I highly recommend 'The Sazerac', Woodford Reserve, Hennesey Cognac, Sugar Syrup, Bitters in an Absinthe rinsed tumbler – a real belter. Whiskey-wise the Cocktail Bar offers the best of Irish whiskey from Bushmills & Midleton with the odd Scotch & Bourbon thrown in but the selection is limited. Thankfully though you are within strolling distance of two bars in Belfast that do cater for your whiskey whims. The first and best is the Duke of York. I don't think any bar in Northern Ireland could really touch it, its no Dornoch Castle (we cant all be as fortunate as JJ) but it's the best we can offer here. Word of warning though, on the weekends it is full to the rafters so its a fight to the bar but the whiskey menu is worth fighting for. Just a 5 min walk from the Duke of York is the second bar I'd recommend, Bittles. A great selection of Irish whiskies, great stout though hampered by the fact it has barely enough room to swing a hamster! Worth a visit though.

7.30pm - myself and the other invitees get ushered into the Vault Room (remember this was an old bank) where we are greeted with an Old Fashioned to help us get in the zone before the main event. Now the release of this new expression of the Dair Ghaelach was so fresh that only one full bottle was available for display, Tree One. The other five bottles came in little sample packs. Our host for the evening, Joe Magowan, had only tried a dram of Tree One himself, literally five minutes before we all arrived, the other five were completely new to him too. Rather than reading us prepared tasting notes Joe decided in advance that the tasting would be rather informal and that we would taste each expression in turn and then open it to the floor to see what we were picking out after each dram, which worked out well and led to some entertaining discussions.

So how about a little info on the product then? Midleton Dair Ghaelach was the first Irish whiskey to be finished in virgin native Irish hogshead oak casks. Batch one used 7 trees from Grinsell's Wood in the Ballaghtobin estate in County Kilkenny. For batch two, 6 trees were felled in Bluebell Forest in Castle Blunden Estate, County Kilkenny. The felling was done in accordance with the Irish Forest Service to make sure the project was completely sustainable. The trees were then transported to Maderbar Sawmills in Galicia to be quarter sawn into staves. The staves then made their journey to the Antonio Paez Lobato cooperage in Jerez where they were dried for 15 months in the Spanish sun and given a light to medium toast before being worked into 29 240 litre hogshead casks. Finally, the casks returned to Ireland and were filled with 12-23 year old pot still whiskeys which had previously been matured in American oak (refill and first fill) and finished for 19 months before bottling. Roughly the outturn will be around 1,000 bottles for each tree. Interestingly batch one used a heavy potstill spirit for maturation whereas batch two used a combination of light and medium potstill spirits. All are bottled at cask strength, non-chill filtered and are natural colour. The RRP is £225/€280 per bottle. 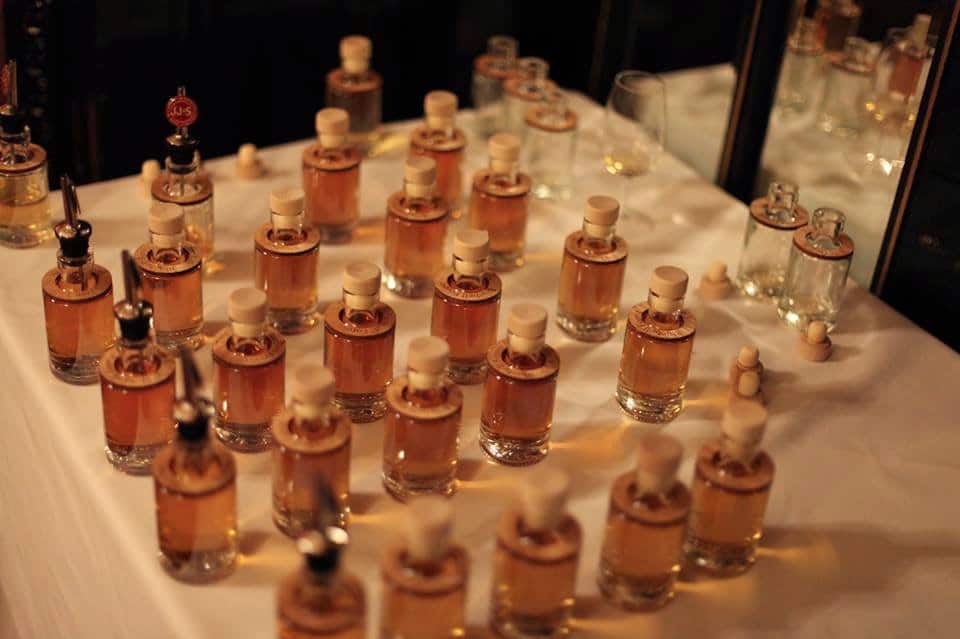 How did they taste? Please bear in mind that these notes are fairly brief as I didn't spend as long on the drams as I would at home and I only got one reduced measure of each. Anyway here goes:

Tree 1 (55.3% - we don't know what the others were because we didn't have the bottles to reference):

In the mouth: Clean, zesty, light and delicate. Vanilla, orange peel, clove, almonds and a light smattering of red berries. I added water, but in hindsight probably too much and killed the dram. No others were experimented with.

In the mouth: Creamy & silky in the mouth. Very peppery initially, not overly sweet but hints of caramel, molasses and dark fruit.

In the moth: Syrupy, warming, toffee, raisins, dark cocoa, nutty with baking spice then back to sweet molasses.

Nose: Quite a floral nose, lighter than the last. Very fruity, green orchard fruit – apples and pears, melon with a slight astringency.

In the mouth: lighter in tone, very smooth arrival, clean, zesty, lemon sherbet, green fruit and a hint of orange with a menthol element on the finish.

Nose: Lemons, tangerines, peaches and the inside of a florists shop.

In the mouth: Alcohol heat straight off the bat, once that subsides the fruitiness comes through with oranges, nectarines & peaches but very short finish.

A really interesting experience. Bear in mind that the same juice went into each barrel for the period of finishing and that the trees themselves were all felled within 10m of each other, so same soil, climate and growing conditions. Yet the effect that each individual tree had on the spirit was marked not only in appearance but also aromas and taste. So much so that I would have sworn that Tree 4 had been oloroso sherry casked matured if I hadn't known the details prior to tasting it. For me the standouts were Trees 4 & 5, with Tree 5 just shading it. A really lively, fruity example that lingered for an age in the finish. But really there is something for everyone here, our host Joe picked Tree 1 as his favourite, fellow blogger and enthusiast WhiskeyJac (Jamie to his mates) loved Tree 3 although Tree 4 took the night when a show off hands was asked for.

You may have noticed I haven't scored any of them. Due to the nature of the tasting and its brevity, I didn't feel I had enough time spent with the drams to garner individual scores. What I will say is that any of the expressions are excellent examples of Irish whiskey and they even have me contemplating spending more than I usually would on a bottle!

Many thanks to Joe Magowan for providing the pictures, because mine were rubbish.