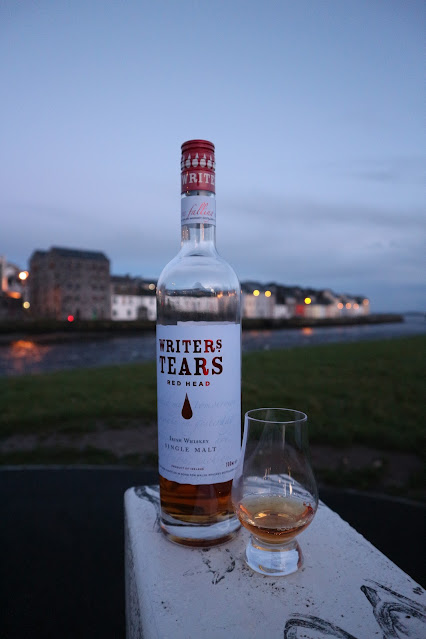 Writers' Tears Red Head hails from the Walsh Whiskey Distillery at Royal Oak in South East Ireland’s County Carlow... or does it? I will answer this riddle soon, but first a little history about Walsh Whiskey.

Owners Bernard & Rosemary Walsh are refreshingly honest on the Walsh Whiskey website regarding the origins of the company. Originally starting off the company as Hot Irishman Ltd they were searching to perfect an Irish coffee recipe to allow us all the chance to make a great Irish coffee without the faff. 2005 saw the launch of an Irish cream liqueur before things really started motoring in 2006 when they signed a whiskey supply agreement with Irish Distillers to supply stock to their own specification. This led to the launch of The Irishman 70 blend and The Irishman single malt in 2007 and in 2009 the Writers Tears blend appeared. Fast forward to 2014 and they announced the beginning of construction of a new distillery in Royal Oak which was duly opened on Easter Sunday 2016. The Writers Tears Red Head was released in August/September 2016 just after the distillery’s official opening. Do you see where I’m going with this?

It comes as no surprise then that this isn’t actually Walsh Whiskey’s own distillate, as we are going to have to wait until at least May 2019 before they bottle their ‘own’ whiskey. This type of practice takes us back in time in Ireland to when people of all sorts ‘bottled in bond’ whiskey from various producers under their own brand name. Of course, this meant that unscrupulous types tried all sorts of tricks to make their stock go further and ultimately whiskey quality and reputations suffered. Now I’m not saying this is the case here, but it is becoming the fashion again in Ireland to ‘bottle in bond’. With the explosion of new distilleries and brands coming onto the scene it simply isn’t possible for them to be bottling their own 5, 7, 10, 13 year old expressions because they are simply too new to have aged stock or possibly they don’t even have a distillery to call their own, simply sourcing stock from the established players of Bushmills, Cooley & Midleton. Now to be fair to Walsh Whiskey they are clear & open about this on their website and hats off to them for that, unfortunately, many other producers are not clear at all which doesn’t help consumers with the provenance of the product. Instead, they are blinded by marketing bravado and the usual Irish legends nonsense.

So on to the Red Head. It’s a triple distilled single malt (meaning it’s Bushmills juice), its NAS, fully matured in Oloroso sherry casks, non-chill filtered and bottled at a hearty 46%. There is no mention of colouring being added or not added but it looks fairly natural to me. This expression was limited to a 12,000 bottle outturn and cost me £45.

On the nose: Candied orange peel, marzipan, milk chocolate, subtle sherry notes and hazelnuts. With water the malt becomes more apparent as does the usual Bushmills fruitiness with banana & melon, the orange lingers in the background.

In the mouth: A nice mouthfeel, quite oily, raisins, baking spices, some alcohol heat, tinned pineapple, marzipan and milk chocolate. Water reduces the bite but means the flavours weaken too becoming less distinct and take longer to develop. Finish: medium, quite dry with the back of the throat warmed with the baking spice, sherry nuttiness and oak.

It’s a fine whiskey, perfectly pleasant but ultimately not that rewarding or memorable. It feels a little youthful and in fact if you crave a fully sherry matured Bushmills I’d recommend the Black Bush over this any day or the Distillery Reserve 12 year old (but unfortunately that requires a distillery visit before you can avail of a bottle). As ever with anything I’ve had from Bushmills water is not its friend and the flavours just seem to lose all distinctiveness with water added.