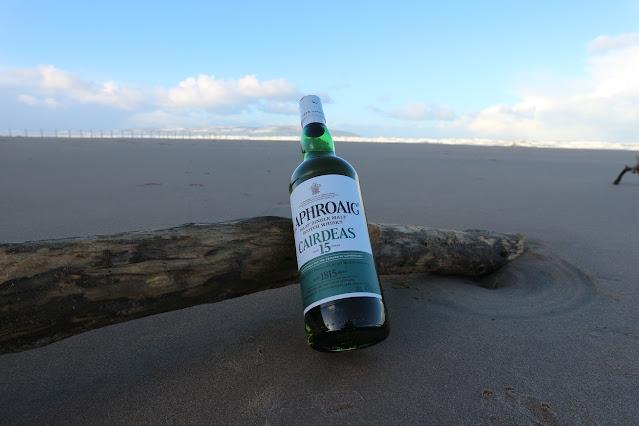 We are all on our very own, personal whisky journey. Over time brands are explored, minds broaden, palates evolve and you may find yourself at a few unusual stops that at the outset seemed very unlikely. My first brush with Laphroaig was with the 10 year old and truthfully I found it abhorrent. I just could not see why anyone would drink TCP for enjoyment and I certainly couldn't ever see myself finding any semblance of joy from the contents of the famous green and white bottle.

Fast forward a few years after meandering my way through the likes of Highland Park, Talisker, Caol Ila, Bowmore (yes...even them), I eventually found I could stomach a Laphroaig, which then developed into a love of the stuff. There. I said it. I really like Laphroaig 10 year old. Now I wouldn't drink it every day but every now and again I really appreciate the iodine laden peat punch of the 10 year old.

Of course like many of you dear Malt readers, once I develop a taste for a dram then I want to explore the rest of what a distillery offers. So over time, I built up a modest collection of various Laphroaig's, much to Jason's bemusement.

Jason has often regaled us with how modern Laphroaig isn't a patch on the pre-still enlargement Laphroaig's of yesteryear. I personally haven't been able to try any 1970's Laphroaig so I'm stuck with the modern peat beast iteration.

Certainly, within the recent releases, things are very much a mixed bag. Only the 10 year old and 10 year old cask strengths have really resonated with me. A couple of the Cairdeas releases have been good too, the 2014 Amontillado and the 2015 floor maltings expressions I rated. Past these, things haven't been so good.

The Select is a smorgasbord of cast off's deemed not good enough to make it into other official bottlings and is well worth avoiding. Travel retail brings more disappointment (and often expensively so) in the form of the Triple Wood, PX Cask, Brodir and I'll take Jason's word on it that the Four Oak is total rubbish.

Last year though one of the highly regarded age statement expressions of Laphroaig made a comeback to the core range, albeit as a Friends of Laphroaig exclusive....the 15 year old. Discontinued in 2009 to the chagrin of many and replaced by the 18 year old, it briefly reappeared in 2015 as a one-off to celebrate 200 years of Laphroaig. This was an expression I often read or heard about as being a real beauty. When it was released in 2017 curiosity got the better of me and I promptly bought a bottle, posted a picture of it on my IG feed and got this message from Jason...'You need help'. Charming.

Little did I know that this bottle would bring yet more mirth for the artist formerly known as Whisky Rover.

As you may have gathered by now I like to take the odd picture of my whiskies out and about the Causeway coast. Generally, I always have a bottle or two in the car just in case I see a setting that might be usable.

One fine day, at the tail end of Storm Caroline, I happened to be in the vicinity of Downhill Beach. As is my wont I had some bottles in the car, one of which was the Laphroaig and it looked like a good day for photo opportunities. After taking a variety of beach shots and being pretty happy with the results I thought I'd like to get one with the Mussenden Temple in the background (For those of you who don't know, the Mussenden Temple was built in 1785 by Lord Bristol as a library based on the Temple of Vesta in Rome in memory of his cousin Frideswide Mussenden. It is now perched rather precariously close to the slowly eroding cliff faces overlooking Downhill Strand and it makes for a rather dramatic picture).

I started to set up the shot. The bottle was placed on a handily exposed rock due to the low tide. I made sure the bottle was stable and then stepped away to line up the shot. Unfortunately, though Storm Caroline wasn't quite as dead as I thought. An onshore breeze whipped up and I felt a sudden gush of wind slap me on the back. It also happened to slap my bottle of Laphroaig full in the face. 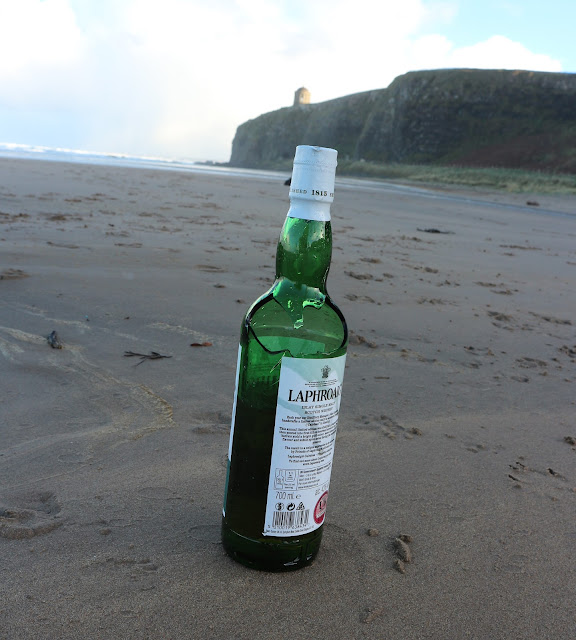 I stood frozen, almost watching in slow motion as Storm Caroline's vicious assault knocked the Laphroaig from its perch. The first smackdown onto the rock didn't break it, but the subsequent tumble and slide down the rock face smashed a hole right below the neck. I watched as the bottle continued its slide into a rockpool to the side of the rock formation. Then it started to bleed out into its saline grave.

By the time my motor skills had caught up with my yelling brain and I managed to pluck the bottle from the crime scene, at least half the contents were now in the rockpool. What was left was an undrinkable saline, seaweed and peat mixture.....how many people feel about Laphroaig at the best of times I imagine!

I trudged back to the car silently screaming inside. I could literally kill Storm Caroline.

Once I'd made it home I posted the tragic consequences of the day's photo shoot on IG as one naturally does. There was an outpouring of sympathy. Except from one source. 'Good riddance' was Jason's statement of encouragement.

The worst thing about the whole affair was that it was an unopened bottle that croaked it....well until Caroline and the rock stepped in. I hadn't tasted it and now I needed another bottle. To add even more salt into the gaping financial wound was that the price had risen by a tenner (that's ten pounds in layman's terms) since I had purchased the first bottle. Undeterred another bottle was purchased and this time it was opened in the more traditional manner.

What about the liquid then I hear you cry? Distilled in 2002 and bottled in 2017 this was matured entirely in first fill bourbon barrels and is bottled at 43%. The first bottle cost me £81 (which is what it currently is selling for on the Laphroaig website), the second bottle £91. 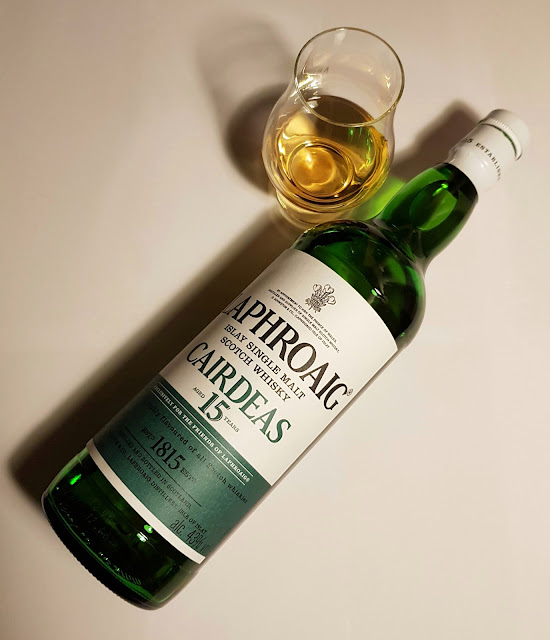 On the nose: Very tame for a Laphroaig, certainly no peat punch here. Gently medicinal – light notes of TCP, iodine and tar. Then the muted notes of creosote, ash and bonfire smoke. Quite a lot of vanilla, then honey, salted lemons and grapefruit, baked pineapple and right at the end Johnson's Talcum powder. It all feels a little 'Laphroaig Lite'.

In the mouth: The first thing that strikes you is the lack of body....its just so thin and watery. Quite a sweet arrival (unsurprising with first fill bourbon). Honey, vanilla, barbecued apples and pineapple rings. Moves to TCP, tobacco and peat embers. Then citrus zest and salt. The finish is surprisingly short but its the grapefruit pith and ash that linger.

Well after my ordeal in sourcing this stuff what a massive disappointment it is! Just a completely underwhelming experience and really one dimensional too. I know the 15 was always described as a gentler version of the 10 but this is just vapid. There's no excitement, no oomph, no delivery.

I think this is where I jump off the Laphroaig bandwagon and start to explore new shores. At £81 there are plenty of other more worthwhile avenues to spend your whisky coins than this one. If you want an official Laphroaig then the 10 year old and 10 year old cask strength are your best bets, both of which are massively cheaper too. After that its time to go indie.

Maybe it's time I started listening to Jason?

(a point was docked for the high price).