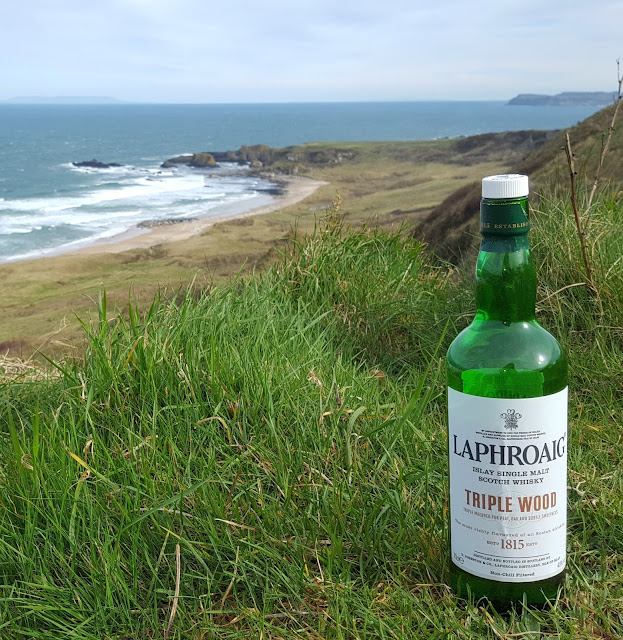 Laphroaig Triple Wood was initially a Global Travel Retail exclusive release that has now made it into the core Laphroaig range and is an extension of the Quarter Cask. What's the Quarter Cask I hear you ask? Some still maturing spirit that was destined to become the standard Laphroaig 10 year old is taken from their ex-bourbon casks and transferred to Quarter Casks.

So how does this affect the whisky? Well the smaller the barrel the more contact there is between the wood and the liquid inside which means more interaction between wood and liquid and in theory a quicker maturation. So essentially, bung your spirit into a small barrel and you can bottle it more quickly (although it still needs to be in the barrel for 3 years and a day before it can legally be called whisky).

The Triple Wood takes the basic premise of the Quarter Cask release and adds in a third maturation in ex-oloroso sherry casks for an undefined time period. Like every other distillery on the planet, Laphroaig use only the finest casks at all stages of their maturation.....which begs the question, who is using the rubbish ones? (Look here for one example at any rate)

Laphroaig released the Quarter Cask Cask Strength last year which they stated themselves was 5 years old. Although a NAS whisky, as it is based on the Quarter Cask we can expect this to be around 5-6 years old. It is bottled at a healthy 48% abv and is non-chill filtered. Excellent! Colouring is used though because it says so on the box.....minus one point already Laphroaig!

I bought this at a cost of €40 from Home of Malts in Germany before they decided to stop shipping to Ireland & the United Kingdom....BOOOOOO!! Anyway you can buy it from Master of Malt for £54.34 if you so desire. 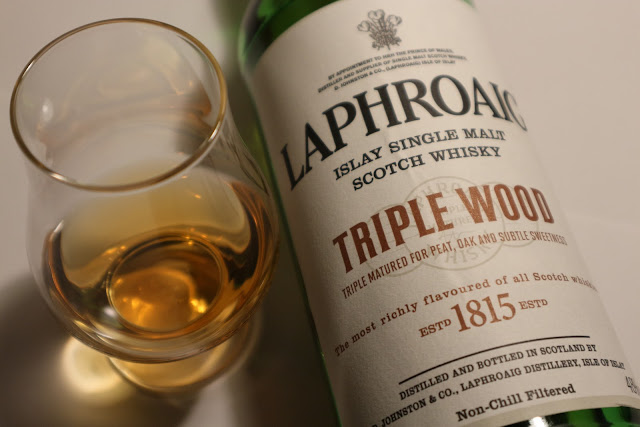 Fairly short on the finish with light sherry notes mixed with the typical coastal brine, ashy smoke & tar notes expected from a Laphroaig.

Sherry and peat can work really, really well together when done right, even with a youthful spirit. The sherry finish here feels like a bit of an afterthought, its maybe just a bit too short or the casks were not of sufficient quality to make a great impact on the rather full tilt Laphroaig spirit. An interesting diversion from the Quarter Cask on which it is derived but not a complete success and certainly not worth the extra outlay.
Labels: Islay Laphroaig NAS Scotch Single Malt Triple Wood Whisky