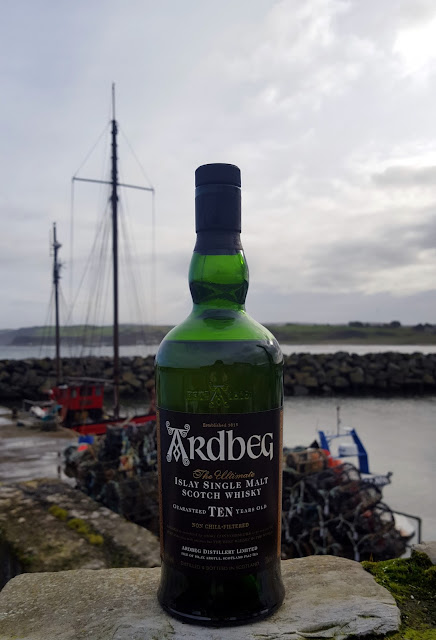 At the turn of the year I had a grand plan for Causeway Coast Whiskey Reviews. From it's inception I had ideally wished to post weekly reviews but managed only 40 in year one, that being said a few were shipped off to Malt. So as 2017 became 2018 I was full of determination that the 'at least weekly' review would become a thing. Alas, work and life (and sometimes laziness) have conspired against me so that I am four reviews behind where I should be at here on CCWR. If indeed I had the work ethic of the whisky review writing machine that is Whisky Rover I would have the lost ground made up in no time. I perceive though that this is unlikely to be the case, so reviews will continue to be piecemeal for the time being.


Which brings us to piece no.7 for 2018 - Ardbeg 10 Year Old. Located on the southern tip of Islay above Laphroaig and Lagavulin, Ardbeg makes up the existing trio of peated powerhouses known as the Kildalton Distilleries. They will be rejoined by Port Ellen in 2020 after some significant investment from Diageo (also responsible for the closure of Port Ellen in 1983.) Of the Islay distilleries these are considered the most powerfully smoky and medicinal using high ppm rates in their barley as well as all using Islay's peaty water through all production stages.

Like many distilleries Ardbeg has a rather chequered history. The first mention of a distillery in Ardbeg was 1794 but it's current iteration was founded and licensed by John MacDougall in 1815. As with the the other distilleries on Islay the majority of Ardbeg's spirit was destined for blends and it was this reliance on blenders that led to its demise in 1981 when it was mothballed by then owners, Allied Distillers, who coincidentally also owned Laphroaig and chose to keep it open. Ardbeg reopened in 1989 under Allied Distillers ownership but only produced for two months a year. By this time Ardbeg has also stopped using it's own floor maltings, instead buying everything in from Port Ellen maltings.

1997 saw ownership change hands to Glenmorangie who invested significantly to build a new visitor centre and increase production to the current capacity of 1.3 million litres of alcohol per year. The 10 year old was first released in 2000 which was distilled pre-Glenmorangie with the new, current post-Glenmorangie style released in 2008 and is currently a permanent fixture of the core line-up. Glenmorangie also gave us the current core line-up of the cask-strength Uigeadail, Corryvreckan and the 2017 release of An Oa.

Ardbeg 10 uses heavily peated malt at 54ppm, it is non-chill filtered, is natural colour and is bottled at 46% and is matured in a combination of first fill and re-fill bourbon barrels. All good! I bought my bottle in Sainsburys where it retails for £47 (although I paid less by virtue of a sale and nectar points!). 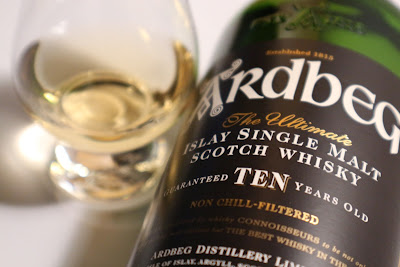 A soft arrival with no alcohol burn and a medium mouthfeel. Sugary sweet on arrival that is then kicked to the side by sea spray and a healthy dose of sweet peat smoke. Salted pretzels, light vanilla and lemon zest make their way through the smoke fleetingly only to be enveloped once again by the ashen smokiness. Water brings a sweeter arrival but then loses composure and structure with the finish becoming slightly bitter. One to keep neat for me.

A long finish that is salty with a hint of aniseed and persistent campfire smoke.

If Laphroaig 10 is all about the peat then Ardbeg 10 is more about the sea. For me it is a much more complicated dram than the Laphroaig, although peaty it definitely is not one dimensional having a great interplay between sweet, salt and citrus freshness with a good level of complexity that you can chew on for some time. Being non-chill filtered and bottled at 46% it also feels more substantial in the mouth than the Laphroaig. It may be more expensive than the Laphroaig but the expense is worth it and is a dram that I would recommend grace everyone's whisky cabinet.