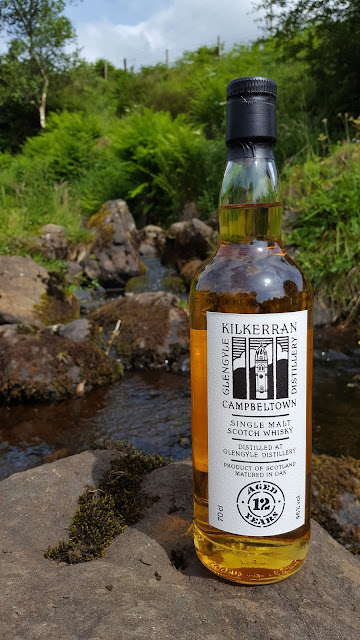 Back in October in posted a Springbank tasting piece after a thoroughly charming evening in Fairleys Bar in Coleraine. The Kilkerran 12 was part of that tasting but I decided to hold back on a review of it as I wanted to do a piece about it individually. Even before that particular tasting I had bought a bottle from The Whisky Barrel mainly due to the overwhelming praise of all things Kilkerran online, especially from individuals that I trusted.

Just remember folks that not everyone online or involved in the world of social media is open and honest about where they get their whisky from or if indeed they are paid to support certain brands, hence biased opinions are common place. In fact, one well supported blog that shall remain anonymous has even gone so far as to eschew the common place idea of providing your own tasting notes by replacing them with 'copy and paste' tasting notes from well known whisky retailers followed by a heart emoji rating.....what is the world coming too. Here at CCWR and indeed in any of my scribings for Malt, I will always let you know how I came to possess said whiskies and will let you know what I see, smell and taste. Even free stuff is not a guarantee of a kind word.

Kilkerran is the product of Glengyle Distillery, owned by Mitchell's Glenglye Ltd, the same Mitchell's that also own Springbank Distillery (producers of Springbank, Longrow and Hazelburn) and the rather marvellous W.M.Cadenheads independent bottling company.

Glengyle Distillery was actually founded in 1872 by William Mitchell after a fallout with his brother John (they both jointly owned Springbank). Due to the decline in fortunes of the Scotch whisky industry at the turn of the 20th century Glengyle was sold in 1919 and eventually ceased production and closed in 1925. Thankfully though the distillery buildings remained in pretty much constant use and so remained intact. The buildings were bought back by Hedley Wright, chairman of J & A Mitchell and great, great nephew of William Mitchell in November 2000.


The name Glengyle couldn't be used to name the new malt as Loch Lomond Distillers own the name, using it for their own vatted malt.  I'll let Kilkerran themselves explain where the name came from, from their own website. 'Kilkerran is derived from the Gaelic ‘Ceann Loch Cille Chiarain’ which is the name of the original settlement where Saint Kerran had his religious cell and where Campbeltown now stands.'

The first distillate ran from the stills of the newly refurbished Glengyle distillery in 2004 with their first whisky release being a 3 year old in 2007. Then came the work in progress series beginning in 2009 that ran from 1 to 7, 7 being released in 2015. This allowed the buying public to see how the distillery's whisky was progressing each year leading up to the release of the 12 year old in 2016 which will be the core expression going forward.

Like everything done by Springbank, the entire whisky production process at Glengyle is very much hands on....no computers here. The malt is peated to around 15ppm (so lightly peated), the fermentation takes between 72-110 hours (this equals flavour) and the spirit is double distilled. The resultant matured spirit is vatted with 70% ex-bourbon casks and 30% ex-sherry casks, is non-chill filtered, natural colour and bottled at 46%. 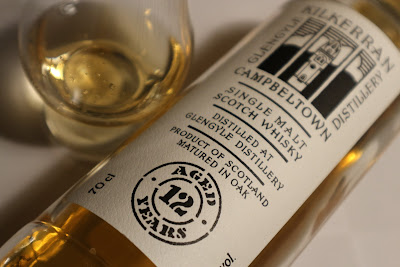 Nice and oily in the mouth. A slight prick of alcohol heat on arrival that then becomes fruity, but tart fruit - granny smith apples, grapefruit, lemon tang mixed with sea salt. Some peach with sugary digestives are there in the mix with a herbal note, slightly chalky and minerally with a gentle heather peat. Water - like the nose allows a little more sherry nuttiness come through but doesn't enhance the palate overall.

For once the internet hype was on the money. It has a lovely balance between sweet and savoury notes and is a cracking dram, especially considering the price. It is a craft presentation for mass produced pricing but boy does the craft show. Bigger companies would easily add on an extra £15 for presenting their whisky this way. This is a well made, well balanced dram and will be a repeat purchase for me on a consistent basis. If you want a 12 year old single malt that keeps delivering flavour wise then this is right up their with my other favourite in this age bracket, the Deanston 12. Go buy it and enjoy it.