The time was exactly 2:58pm on May 27th of this year. I was sitting in a Circle K filling station just off the N7, eating a maple pecan slice with a large cup of coffee. I was staring at my phone feet tapping, legs twitching in eager anticipation.

3pm. Boom! I was in and the chase was on. 'Right, the email said I could buy two bottles....but I can only pick one! Ummm...go back to that start and try again.....okay, grand...working so far....BINGO!' Two bottles in the basket and time to checkout. Credit card details input....payment accepted, confirmation email received.

It's 3:03pm and I'm €780 lighter but I have two Redbreast Dream Cask 20-year-olds bagged, one for my friend Paddy and one for myself. My journey to Waterford for the Waterford Whiskey Societies Green Spot tasting can continue. Just another 2 hours to go.

Little did I know of the furore kicking off in the virtual realm, as I drove the motorway to Waterford.

By the time I made it to Waterford and bothered to check in with Twitter and Facebook, it was clear there was a large outpouring of ire and rage happening. Initially, this was directed at the Redbreast Birdhouse member page where the purchases were to made made. Many were complaining that they couldn't get on the page full stop...they kept being redirected. In hindsight this seemed to be an issue with those who were trying to buy via desktops and laptops. Those of us who used mobile devices didn't seem to have this issue....as my 3 minute purchasing experience shows. Saying that, I wouldn't say it was the most user friendly interface I've ever used for buying whiskey.

As it turned out, the entire 924 500ml bottles sold out within 14 minutes. That's 65 bottles a minute folks. This is frankly amazing considering the much lauded Dream Cask 32 took over 6 hours to sell out its 816 500ml bottle outturn. Now, two things may have encouraged this quick sell. First, the 3pm kick off, which allowed our friends Stateside to be wide awake and ready to splurge. Second, was the auction prices that the Dream Cask 32 achieved....the high point being £2,200 on one auction site. A considerable uplift on the €500 asking price.

Which brings me nicely onto the second reason for the fury spewing onto the virtual realm of Facebook and Twitter. One buck eejit literally posted in a Facebook forum, after he had received his confirmation email of purchase success, that he would pass a bottle on to the unfortunates who couldn't buy one at cost for the knock down bargain basement price of €1,000.

One of the rules for this forum is that you could only sell what you had in your possession and photographic proof is required. But the excited expectation of making a killing immediately, off one of these bottles was way too much to be obstructed by mere rules. Such action, just shows the flipper greed that now greets releases such as this. It kind of hacks away at your belief in humanity. It was actually gratifying to see the vitriol virtually sent to this muppet. Nothing like kicking folk when they're down....but boy did they kick back.

Of course, now that I had a bottle of the Dream Cask 20, the natural progression was to try and acquire a sample of the hallowed Dream Cask 32. Somehow I had been overlooked by Irish Distillers when the samples were handed out when it was first launched! #jealouspathetic Sadly though, I was finding it very difficult to acquire. I put out an appeal via the Irish Whiskey Facebook group pages, but to no avail....even offering cash didn't produce a response.

Step in the Belfast Whiskey Club. Organised by Paul O'Kane, I attended one of his tastings, where he did a head to head with Dillon Bass brand ambassador and beard wearer extraordinaire, Joe Magowan. It was here that two members of the club both offered me 50ml samples of the DC32, not for money, but in the universal currency of whiskey, to enable me to achieve this review. So thank you, John Donnelly and Mickey Donnelly....true gentlemen and to the best of my knowledge they aren't brothers although they share the same surname! Hopefully, you enjoyed the reciprocal sample bottles.

At this point I suppose you want to know about the whiskies? Fair enough then....

The Dream Cask 32 came about to celebrate World Whisky Day 2018 and Billy Leighton, Irish Distillers Master Blender was charged with picking his own 'Dream Cask' that highlighted the pinnacle of Redbreast in his eyes. Originally distilled on October 31st 1985 and laid down in a bourbon barrel from a package of barrels that would actually form the basis for the first release of Redbreast 21 year old, the Dream Cask was then re-racked into a first fill oloroso seasoned cask nearly 26 years later on March 8th 2011. It spent the next 7 years maturing before being bottled in 2018. It was bottled at 46.5% abv, is non-chill filtered and natural colour and, as stated earlier, cost €500 per 500ml bottle on release.

We'll start with the Dream Cask 20.

On the nose: Immediately greeted with pot still spice and sandalwood notes. Cinnamon, clove and liquorice root. Dusty oak. PX raisin sweetness is very pronounced with sticky toffee pudding dotted with dried dark fruit. Vanilla fudge and a hint of cocoa carry through. Water releases more fudge and brown sugar sweetness with a little tropical fruit in the form of mango and papaya. A lovely nose this.

In the mouth: Considering the abv I find this a little lacking in mouth feel, especially for a pot still. There is a spicy attack on arrival with clove oil and pepper heat. Dark chocolate and coffee grounds come to the fore. Now a spike of syrupy sweet PX sherry influence which quickly becomes dry, dusty and woody spice driven – cinnamon, nutmeg and oak tannins. The finish is surprisingly fleeting marked by coffee mixed with toffee that are both fighting the oak tannins. Water brings forth a bit more sweetness but decimates the already short finish. 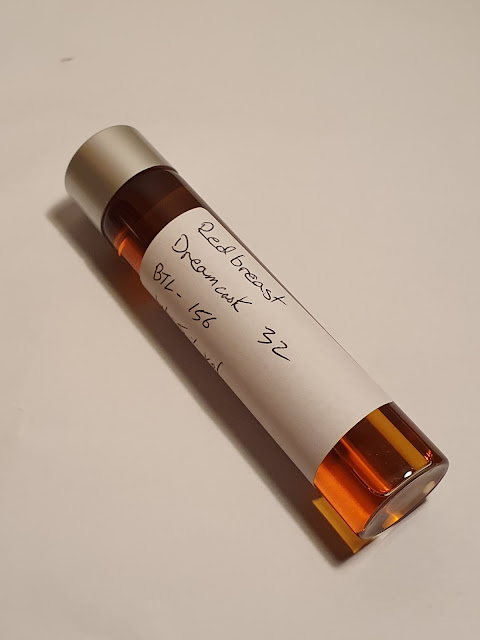 On the nose: Truly a thing of beauty. Pot still spice, dunnage earthiness and very fruity. Stewed blueberries, blackcurrants and blackberries with a touch of menthol cherry. Then layered spices – Christmas baking spices of nutmeg, cinnamon and clove with a some cardamom too. Oak, old leather, a little polish, beeswax and rolling tobacco. Yet the berry compote underlines it all. Somehow this manages to be fresh yet mature all at once. Water gives vanilla custard and more menthol cherry along with peaches and cream.

In the mouth: Again I'm a little (but only a little) disappointed by the mouth feel here, as if a lighter style pot still has been used. Juicy and sweet oloroso on arrival with muscovado sugar, dried fig and orange oil. Then the pot still spice comes into play developing a head of light pepper, cinnamon and warming clove. There is an underlying note of vanilla custard with honeyed peaches trying to come through but that is dominated by the sherry notes and dry oak. The finish is of medium long length with cacao nibs, warming spice and dark fruit. Water gives us more clove and dark chocolate, syrupy sweetness and espresso.

Starting with the Dream Cask 20. All I can say, is how massively disappointed I have been with this release. To date this is the least engaging Redbreast I have experienced. I have tried it a number of times and each time I have been just plain disappointed. While the nose is very pleasant indeed, the palate is PX dominated and develops little with a staggeringly short finish.

I was at a charity Redbreast tasting in Dublin this July and the DC20 was the first drop of the night. I can't recall anyone choosing it as their pick of the 6 drops on offer (and rounding up the prices to 700ml the DC20 was the most expensive by a country mile). My good friend Ivor (@whiskeytalk2u) was there that night and pointed out that for him it had the singularly most defined raisin note in the nose of any whiskey he could think of. Fine....but if I wanted to nose raisin concentrate I'd just buy a bottle of Pedro Ximenez sherry and save €360.

That comment also got me thinking about how the DC20 would compare to the Lustau edition of the core range, it being finished in oloroso sherry casks for a year, and so I did a little side by side tasting. At full abv, the DC20 edged the competition in both nose and palate...just much fuller in both areas. Add a little water though and things became much more murky....very little to choose between them in fact. So would I rather have a 500ml bottle of DC20 or seven and half 700ml bottles of Lustau? That's an easy answer. That's not to say that the DC20 is a terrible whiskey....it isn't, it's just nice...and for the price I'd expect staggering rather than nice.

Moving onto the much vaulted and hyped Dream Cask 32 year old. The King of Irish whiskies? Not for me. Not even the best that Irish Distillers have produced. I'd probably have to choose the Method and Madness 28 year old Pot Still Port matured whiskey for that accolade, although at £1500 a bottle it better be flipping amazing. Although in terms of Malt, that accolade still lands with the Redbreast 21 year old.