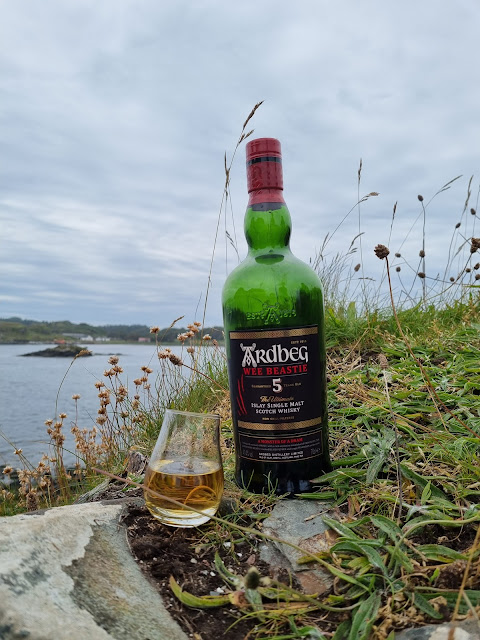 It's back to the shores of Islay for this review and specifically the most eastern of the Kildalton Trio, Ardbeg. I've previously reviewed both the 10 year old and the Uigedail expressions way back in 2018 so it's probably about time I gave Ardbeg a little more coverage.
I have the An Oa expression on my shelves too and I'm awaiting delivery of the Corryvreckan so I'll get some notes on them soon enough which means I'll have covered the entire core range of Ardbeg. It's a core range that I've wanted to cover for a long time as up until the release of today's expression, the Wee Beastie, it was considered one of the best core range's available to buy without costing the earth.
Bar the 10 year old the Wee Beastie is the only part of the core range to proudly wear an age statement. Some may baulk at the idea of labelling your bottle with a 5 year old age statement but I say fair play to Ardbeg as obviously they have confidence in the product. Bear in mind back in the 70's a 5 year old single malt would have been perceived as relatively mature, a 12 year old was positively ancient. On top of that, if a whisky is well made then it can still produce quite marvellous results at a youthful age, just look at the Killowen Barántúil for evidence of that.

It would have been very easy for Ardbeg to have released another Islay landmark titled non age statement expression that would have given precious little more information to the consumer other than the usual guff of 'a range of young to well aged spirit matured in the finest of fine casks'. But as a consumer at least you know that the youngest spirit in the Wee Beastie is at least 5 years old.
What Ardbeg do tell us on their website though is that they set out to 'make the rawest, smokiest Ardbeg ever'. The Wee Beastie is also matured in a combination of ex-bourbon and ex-oloroso sherry casks. It's bottled at 47.4%, is non chill filtered and I believe it is also natural colour. It retails for £39 but can be found on offer for less.

Palate: On arrival I’m greeted by honey and spun sugar with the green apples appearing again. This is followed by a wave of smoke, ash and tar with a menthol freshness behind that.

Finish: Short but dominated by ash and smoke.

Overall: The 10 year old this is not. Very one dimensional with little flavour development being mostly about smoke and tar, so in a way Ardbeg succeeded in making the rawest, smokiest Ardbeg ever. The nose is actually pretty good but the palate isn’t really appealing at all and considering it retails close to the 10 year old it doesn’t really represent value. If you love sucking lumps of peat I assume this will be right up your street....if you want complexity look elsewhere. Certainly for a young peated whisky it's nowhere near as good as the Bill Phil from WD O’Connell or even the Dark Silkie which is a much better bet for less money.