Whiskey is getting to an interesting place in Ireland now. So long a landscape dominated by the 'Big Three' of Bushmills, Cooley and Midleton, the time's, as they say, are a changing. Dingle first broke that mould by releasing their single malt in 2016, which now seems a lifetime ago. More distilleries have subsequently come on stream and more distilleries have also released their own product.

In the quiet of Co Down we've already had Shortcross release not only a single malt but also a rye & malt in the past year. Then came the news in September that Killowen's first cask had just turned 3 years old. It's amazing how time flies. By September 27th we got to enjoy a video of Brendan announcing cask no 1 was going to be disgorged and bottled, certainly living up to his promise in the interview I did with him in October 2020....

'Well we have 18 month old spirit right now so I’d say once it is 3 years old we will release it with a label proudly telling people it’s age, letting them know what they are drinking'

Personally I find Killowen the type of distillery that it's hard not to get excited about. The anti-thesis of multinational conglomerateur, distilleries like Killowen exist purely out of love and passion. If you ever have met or get to meet Brendan or any of the team at Killowen it is nigh on impossible not to get caught up in their enthusiasm for what they do and want to achieve, which is to simply make they whiskey they want to drink but couldn't find on the market right now.

Thanks to the likes of Killowen (and others) we will get to see modern interpretations of what whiskey in Ireland would have been like and will hopefully once and for all put to bed the most degrading of comments about Irish whiskey.....that it's smooth!

What we can expect going forward in Ireland is whiskey of character, whiskey long since removed from the bland blends of the 1970's that may have saved an industry but lost an identity.

Now I know Brendan is a man that doesn't do things by halves, so if he felt it wasn't ready it wouldn't be released. And so here we are....Killowen Whiskey, bottled and ready to be enjoyed by those lucky enough to get a bottle.

Speaking of which, if you did manage to win the ballot to get a chance of purchasing a bottle then you are indeed in a fortunate club as over 3,000 entered the ballot. 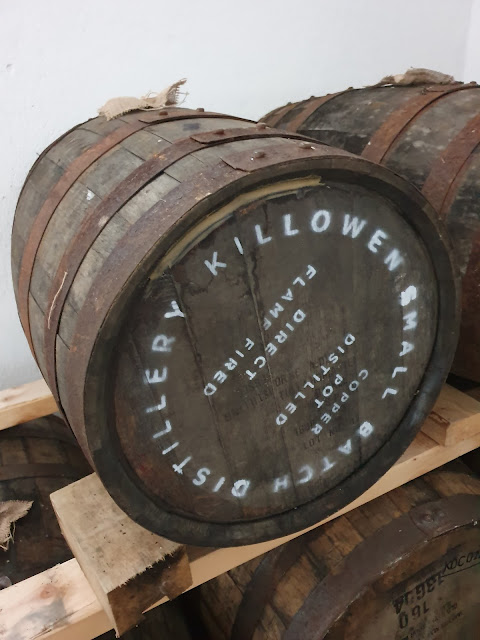 What is Killowen's first release then? Well it's in reality a non-GI compliant pot still that they have given the jazzy name of 'Mixed Mash Bill' Irish whiskey. Hopefully soon when the technical file is updated Killowen and others will be able to call their whiskies with mashbills like this pot still.

So the mash bill goes as such....3 bags of unmalted barley, 7 bags of smoked malted barley, 2 bags of oats, 1 bag of wheat and 1 bag of rye. This had a funky fermentation although I'm not sure of the exact length but I do know Brendan likes a long fermentation time, well over 100 hrs. The distillation too was low and slow with the stills running from 7am to 7pm. Both the 1000 ltr wash still and 800 ltr spirit still were only half filled during distillation and the distillates have been worm tub condensed.

The cask used for maturation was a 120 ltr ex-pedro ximinez cask with the distillery even going so far as to tell the consumer that it still had 5 litres of PX sherry inside which was emptied and the cask rinsed with 40c water before filling.

Oh and another thing. The name which Killowen will release their own whiskies is Barántúil which means 'authentic' in Gaelic. A lovely touch. And Killowen are being authentic, not only with the mash bill but with the labelling which does indeed proudly display that 3 year age statement and and gives us nerds all the info we need about the product held inside that handsome glass bottle.

So how much did a bottle of cask one cost? £149.99 for 50 cl at 60.7% abv. Ouch. Pricey I know but as I stated at the end of the interview piece Killowen will never be cheap due to their size and also the fact that their whiskey will more than likely always be cask strength. Plus this is their first release, it's extremely limited and is in essence a piece of liquid history. The good news is that for cask no 2 the bottles will be £99.99. Still not cheap but definitely more affordable.

I was very fortunate to get a bottle of cask no 1 in the ballot and I had no hesitation in buying it. It will be opened, shared and enjoyed.

This review was possible because the kind people at Killowen sent me a sample but as always that doesn't mean that a flowery score is a given. 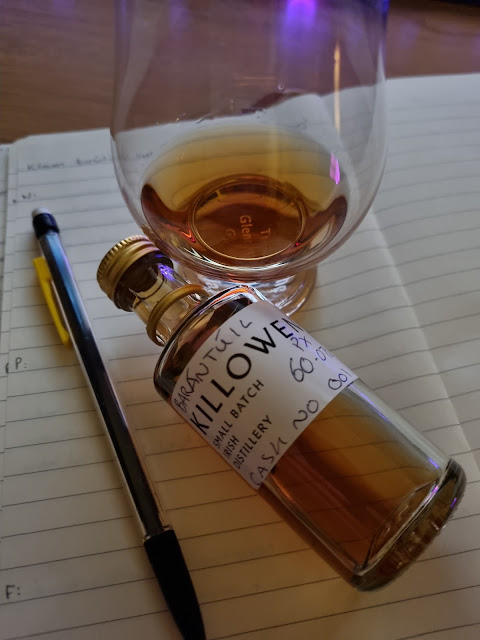 Overall: After all the waiting and anticipation for Killowen's first cask release, on first sip I was a little disappointed, it seemed a bit flat. But to anyone who has been lucky enough to win the ballot and acquire a bottle......fear not! With each sip the flavours layered up, it just turned out the palate was little shy.

Now as ever palates are a very personal thing so if the score isn't quite as high as you expected bear in mind it's only my personal opinion.

As it is, this is a very accomplished whiskey that thankfully hasn't been completely overtaken by the PX cask maturation. While sweet it is not a complete sherry bomb and there is enough spice and citrus notes to temper that syrupy PX sherry. It also does not drink like 60% abv, it's robust but not rough.

Personally I felt that water helped open out proceedings, especially so with the palate. But I feel the nose isn't quite matched by the palate and the finish is a little shorter than I thought it would be (yes I know it's only 3 years old, but still).

However this is just cask one of many more to come and this has already set a high bar so lets see where time takes us, we are just at the start of the journey.