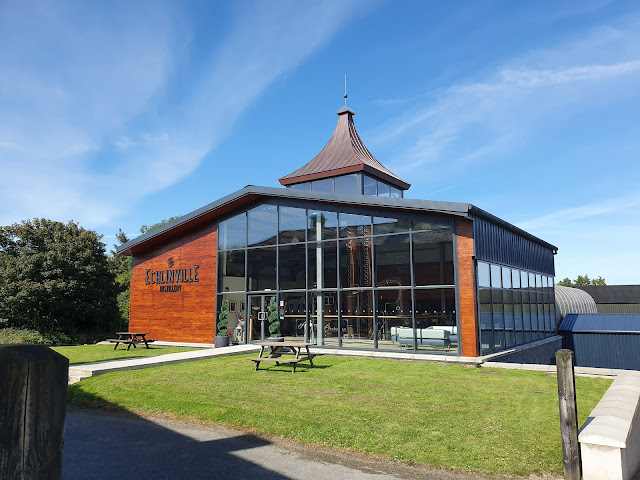 Dunville’s is a brand that to date has had no real exposure here on Malt. There’s no real reason for that other than I am preposterously slow at writing articles and none of my fellow Malt scribes can be bothered touching much Irish spirits, instead focusing their time on novelties such as Borebon, Scotch Mist and Apple Sauce.

I also felt it was time to give more coverage to the smaller brands in Ireland stepping outside of Irish Distillers, Bushmills or the remnants of Cooley and so Dunville’s has the enviable/unenviable privilege of having my stony gaze cast upon them.

Previously, I have covered a couple of Dunville’s expressions on my own mediocre little site looking at both the 10 year old PX finish single malt and the Three Crown’s blend and to be frank I was pretty underwhelmed by both.

Time has marched on considerably since those reviews and I felt it time to cover what the chap’s at Dunville’s have been up to more recently. I have been reliably informed that the Three Crowns blend has been revised, so I’ll have to revisit that expression again, but for today’s purposes, I will be reviewing seven, that’s right...seven single malt expressions that have come out under the Dunville’s umbrella. As I’m covering seven malts, I’ll keep the preamble relatively brief and encourage you to read my reviews above to get a little history on the brand itself.

Anyways, for the uninitiated Dunville’s is a ‘Lazarus’ brand, that is, it has been resurrected from the dead and given new life. Owned by Echlinville Distillery (who are known for the Feckin brand, Jawbox Gin, Weavers Gin and Echlinville Gin), who have pledged that they wanted to not just resurrect the brand, but put it firmly back on the map.

Echlinville themselves are distilling single malt and pot still and are a field to glass distillery, who as yet have not released any of their own spirit, although they do have mature spirit nearing 8 years of age. Like I mentioned in my previous piece, I intend to do an interview with some poor soul from the distillery, so you can see what is going on down in Kircubbin.

So, while Echlinville has allowed them to perfect their distillation skills, Dunville’s has allowed them to demonstrate the cask management, which of course will be good practice for their own spirit, once they see fit to release it. Dunville’s then is, and will remain, sourced spirit from other Irish Distilleries and Shane, Jarlath and Graeme are all refreshingly open about that.

So, here’s a quick rundown of the whiskies on show today.

The 12 year old PX finish....10 years in ex-bourbon and a further 2 to 3 years in a combination of PX butts and hogsheads. Bottled at 46%. Then Batch 1 of the 12 year old PX at a cask strength of 55% from a single cask that yielded around 300 bottles and had a maturation period of 2 years and 4 months in the PX cask.

Next up, are two Palo Cortado sherry finished single cask expressions. Casks 1196 & 1203, bottled at 48% and 55% respectively and turning out 375 and 313 bottles. Matured in bourbon for 16 years before an additional 2 years and 4 months in ex-Palo Cortado casks.

Next up, is cask 162 at a strength of 55%, which is an Oloroso finish. Again, matured for 16 years in ex-bourbon before 3 years and 2 months in an Oloroso butt. This is as yet unreleased and is an insight into some of the liquid Dunville’s have to play with as is cask 1717 which took the same liquid from cask 162 and gave it another 3 months in a PX cask and is currently sitting at around 54% abv.

Finally, it’s the 18 year old Port Mourant Rum finish cask. Matured for 15 years in ex-bourbon casks before over 3 years in a 41 year old Port Mourant rum cask and bottled at 57%. Now, this is slightly pricey at £585 per bottle, but the presentation is something to behold. But as we know pretty boxes do not make the whiskey.

Full disclosure... I got these samples through a mixture of Belfast Whiskey Club, Talk Dram Tastings and from Dunville’s themselves, although I have bought batches 1 & 2 of the 12 year old PX Cask Strength and the 55% Palo Cortado just for your information! Saying this, you will have trouble purchasing the single cask expressions as they are all sold out bar the 18 year Port Mourant expression.

Let’s dip in then!

On the nose: a burst of tropical fruit initially - mango, pineapples, peaches and banana’s - juicy fruit gum - them some sherries notes come through - sweet raisins, mixed citrus peels, milk chocolate, almonds and toffee with a light dusting of baking spices and a little furniture polish.

In the mouth: a lovely mouthfeel - spun sugar and toffee on arrival - apple, peach, banana cake, iced fruit cake, cocoa powder, raisins, dates and then a buildup of pepper and clove rock spice. The finish is satisfying with coffee, oak spice and chewy toffee. 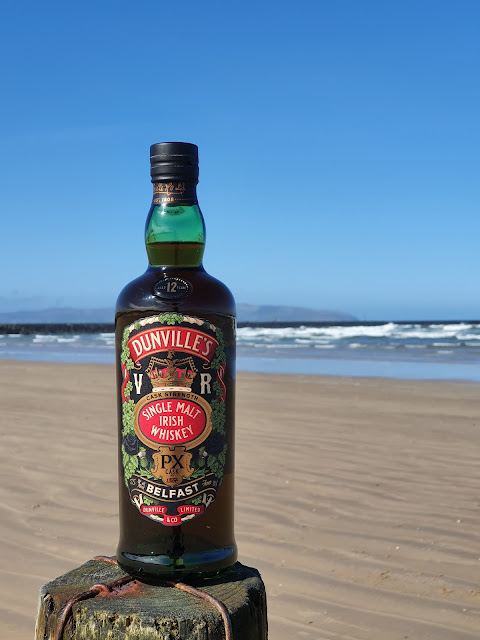 Bottled at 55% strength, you'll have to shop around for this but expect to pay circa £108.

On the nose: Intense caramelised sugar notes at first - sweet raisins, frangipane, cinnamon, nutmeg, clove rock all present & correct. A slight woody dryness with bitter dark chocolate, orange oil and all the while underpinned by peach, white grapes and banana.

In the mouth: Really chewy - raisins and sugar syrup, dates and a little molasses. Clove and pepper heat warm the palate midway through before allowing the stone fruit of peach and apricot to come to the fore with melon and banana too and some citrus tang. The finish is of good length with garden mint, dark chocolate, citrus notes and clove spice.

In the mouth: much drier than the nose suggests - quite sharp on arrival - limes give way to chocolate oranges, espresso, ginger and cinnamon. Apples and pears follow with a drambuie like honey liqueur note. The finish is long with lingering ginger and wood spices and some salted pistachios. 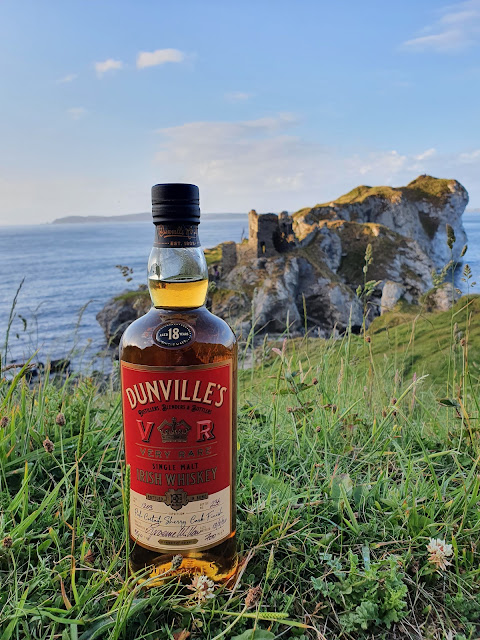 In the mouth: This is sweeter on arrival than the 48% version if a little hotter. Manuka honey, dark dried fruit - figs, dates, black coffee with clove rock sweets and chilli dark chocolate. Still though you can get the vanilla, stewed orchard fruits - apples, nectarines with toasted nuts and a savoury herbal quality. The finish is long, sweet, spicy and chewy.

Showcased at 55% strength, this is unreleased as of yet and comes from cask #162

In the mouth: All about the sherry here - sticky toffee pudding studded with dates, candied citrus fruit, raisins and figs. Cinnamon, oak spice, anise, fenugreek and black dark roast coffee. Bitter orange marmalade and balsamic reduction. Even with all that sherry influence you can pick out apples, pear and stewed berries. The finish is long with a good balance between sweet, savoury and spices. Excellent stuff.

Tasted at 54% strength, this is also unreleased as of yet, and heralds from cask #1717.

In the mouth: Uh oh - this is confused. Not as sweet as the nose at all - very peppery with alcohol heat prevalent. White pepper & clove oil - not much fruitiness - chocolate, sugared espresso, walnuts, raw ginger and aggressive oak tannins. 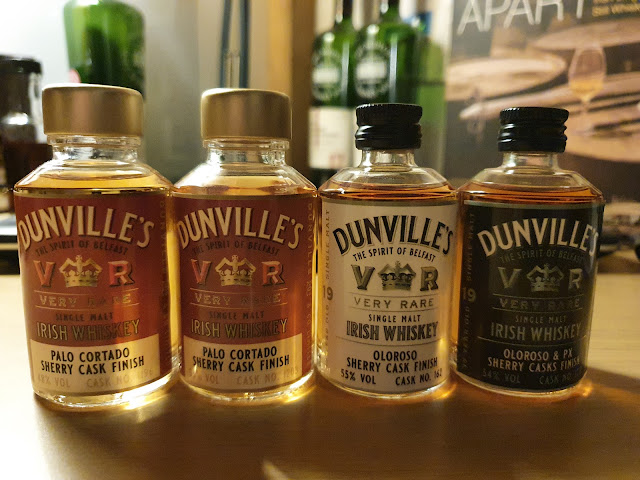 In the mouth: ‘utters sigh of immense sadness’.... oh dear.... starts off nicely viscous on the palate but also aggressively hot from alcohol and wood spices. Raw ginger, cloves and pepper heat dominate proceedings - once you get past the incessant heat there is apple strudel, caramel and some chocolate. The finish, while it lasts a fairly long time, is full of mouth-puckering spice that dominates all. With water: now sweeter on arrival.... muscovado sugar and charred pineapples but still the spice dominates.

WOW. Definitely the best rum I’ve ever tasted and am likely to taste again. Period.

I imagine this will elicit some responses... especially from those who have bought the Port Mourant finish expression. So, let’s run through them all for a final flourish.

With all whiskey producers, no one gets it right all of the time... and I mean no one, so it should really be no surprise that there is a mixed bag of scoring here. On the whole, with a few exceptions, it’s a very bright picture, so I suppose let’s clear up the lower score first.

First up... the 18 year Port Mourant cask finish. No doubt I will cop a lot of heat for this score and it is likely lower than the guys at Dunville’s were expecting, even though they are fully aware that I personally have struggled with it in this form. The problem is that I tried it early on in its genesis and felt that it had reached its zenith much earlier as you can read about here. Seriously, please read those tasting notes. It’s amazing how an extra year in the rum cask has exerted an almost vice-like grip of total spice domination and subjugated the tropical notes almost completely. This was heading for a 3, but the dash of water saved it. Honestly though, if I spent £585 on a bottle of this I’d be gutted.

Things are much simpler with the 12 year old PX and 12 year old PX cask strength. Simply put, while the 12 year old PX is a fine fine whiskey, it is simply too expensive at £88 and has lost a point for that. There are other options out there from Benriach, Glendronach and Glenallachie that offer experiences very close to that of the 12 PX at 46% for much less money. I suppose this is the downside of sourcing liquid before finishing in Ireland, is aged stock is getting harder to come by at affordable prices. The cask strength version of the 12 year old is not just a more intense experience, but also represents better value, as it affords you the chance to play about with water if you choose too.

The two Palo Cortado casks don’t just highlight the difference that ABV makes, but also the differences discernible from sister casks. Cask 1196 at 48% was unbalanced to me between nose and palate with the palate just not matching up to that fine nose. Cask 1203 at 55% just delivered much more in terms of balance and complexity on both nose and palate which is why I bought one of those bottles.

Cask 1717 shows that sometimes extra is not required. Sadly, that extra time in the PX cask again led to an unbalanced dram that again was overwhelmed by aggressive spice and oak tannins. Cask 162, the 19 year old Oloroso cask was simply divine though. It may have been a touch sherry cask dominant, but I don’t care at all, as the end result was nuanced, balanced and extremely, extremely moreish. The lad’s at Dunville’s are on to an absolute winner with that cask and should immediately bottle it for sale! In my humble opinion of course.

I look forward to the future releases from Dunville’s and also importantly from the Echlinville brand itself. More of that will be forthcoming on Malt with an interview piece...