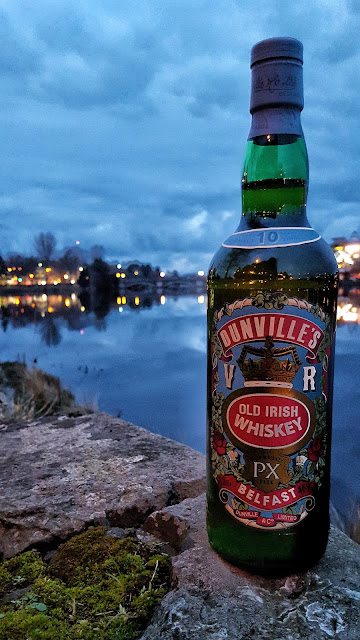 Dunville & Co. were originally tea merchants hailing from Belfast, County Antrim in 1825 who diversified into blending whiskey and they garnered a reputation for being very good at it, with the Dunville's VR being their most popular whiskey. This led onto them building their own distillery in 1869 and thus producing and marketing their own whiskey.

The Royal Irish Distilleries was a large, imposing four storey red brick building that housed five pot stills with a Coffey still added at a later date. This allowed for a production of some 2.5 million gallons per year, with much of this going into Dunvilles's blends, the VR and the Three Crowns.


After the death of the companies last heir & chairman, Robert Lambert Dunville, in 1931 the company was liquidated by its directors in 1936 although it was still profitable. Happily though in 2013 the Dunville's Brand was revived by the Echlinville Distillery in Kircubbin under the stewardship of Shane Braniff.

As Echlinville only produced their first spirit in 2013 they have bought the spirit used for this Dunville's VR from other distilleries (almost certainly Bushmills in this case) and aged them themselves. Echlinvilles also bottle the 'Three Crowns' blend which sounds very interesting too....marrying a 4 year old single grain, 10 year old single malt & a 15 year old single malt finished in Oloroso casks. (echlinville.com)

In the case of the VR PX cask here we have a 10 year old single malt aged in bourbon barrels before a finish in Pedro Ximenez sweet sherry casks of undetermined length. It has been bottled a 46% and is not chill filtered, so kudos to Echlinville for that. There is no mention on the packaging that it is not natural colour so I will give them the benefit of the doubt on that one.

This bottle cost me £45 from local specialists Fairleys 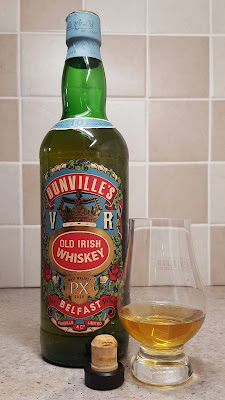 Very smooth arrival, not as sweet as the nose suggests, peppery, quite dry, walnuts, bitter cocoa

Quite short - dark chocolate covered nuts with a hint of bubblegum & the parma violets once again.

The nose and the palate don't quite match up and I actually really struggled to find any PX cask influence at all in the palate. It was quite surprising how the exceedingly sweet aroma didn't carry through to the palate, so I'm surmising that the PX cask finish was rather short in timescale. Although bottled at 46% it does not take water well at all, I added only a couple of millilitres and killed it dead.

This is a very light, aperitif style Irish whiskey. It isn't the most complex Irish whiskey I have tried even at this age statement but it was enjoyable enough and I'm glad I had the opportunity to try it. Im looking forward to trying Echlinville's own spirit in due course though....the Irish whiskey revival can only be a good thing!