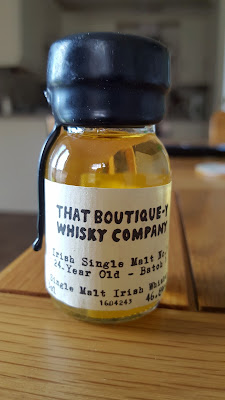 That Boutique-y Whisky Company are an independent bottling company set up in 2012. Their bottles are anything but ordinary, being illustrated by artist Emily Chappell and as their own website says they 'offer stunning whiskies from world-renowned brands and distilleries. Each bottle has a fun and informative graphic-novel style label containing humorous references, in jokes and shocking puns.'

Take, for example, the label for the whisky I'm reviewing here, the Irish Single Malt No.1 24 Year Old - Batch 1. 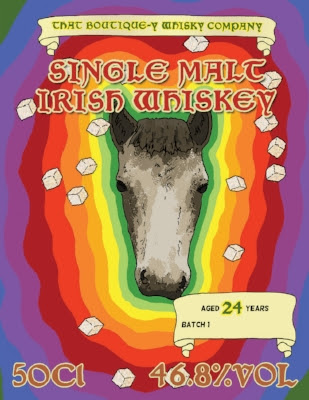 Definitely not the standard approach to labelling by any means, but boy does it stand out and any reference to Father Ted is good in my books!

As of 2016 the company added age statements to their whiskies too - 'When we started on our noble mission, we often had releases which had a huge range of aged liquid in them - often varying by up to 30 years within a single batch. The only constraint we had was that the liquid had to be excellent, and justify its place in the line up. At the time, and especially given the nonsensical legislation that dictates the ages that are allowed to be shown on a bottle*, that would have meant having to quote an age which would have totally belied the quality of the liquid and would have been a distraction. So, we decided to sack off the whole age statement business altogether. This is much less the case now, and our releases tend to have more consistency in the ages, and so the minimum age is much more representative of the batch.'

This particular whisky is 24 years old, bottled at 46.8% which I assume is the cask strength (although I could be wrong there) and produced 264 bottles and as such would have set you back £125 for a 50cl bottle. Going back 24 years and the Irish whisky sector was in a bit of a state with only 3 main players, Irish Distillers, Cooley & Bushmills. The liquid here is almost certainly Bushmills. 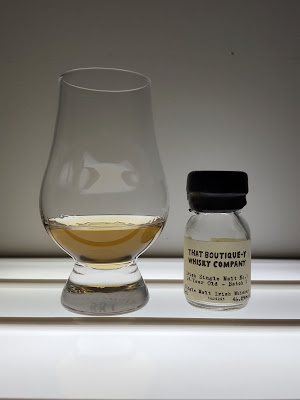 Long and very warming - bitter cocoa and still a bit of that chilli heat.

Definitely an experience but one that was somewhat disjointed. The nose & palate didn't really marry up....personally I felt the oak dominated the spirit, so the fruit notes picked up on the nose rapidly disappeared in the palate, overtaken by the tannins from the oak and being surprisingly hot for a spirit that was matured for 24 years. But that is the beauty of single cask whiskies - variation. You just don't know how each batch will turn out and each one is an adventure!