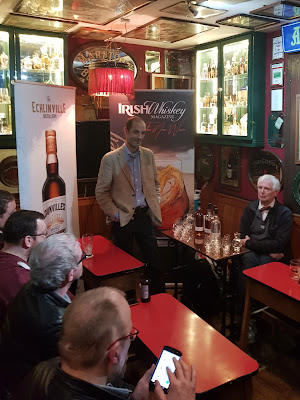 After spending the first part of the evening in The Friend at Hand enjoying the new Powers exclusive single cask release we made the long trip of around 50 yards round the corner to the Duke of York for, on my part at least, a surprise extension to the evening. Irish Whiskey Magazine were hosting a chat and tasting evening in conjunction with Echlinville Distillery (based in Kircubbin on the Ards Penisula).
To get us started, Irish Whiskey Magazine founder and owner, Serghios Florides explained how the magazine in conjunction with Fionnán O'Connor, were doing a series of articles called 'The Seven Sips' which traced the history of whiskey and in particular Irish Whiskey through the ages ultimately leading up to where we are today. One of the articles penned by Fionnán was entitled 'For the Love of Oats' and highlighted the customary use of oats by Irish distillers back in the early 1600's when distillation was very much a farmyard activity. Excitingly Echlinville distillery had agreed to try an experiment with oats in a mash bill leading to the evening we were attending. 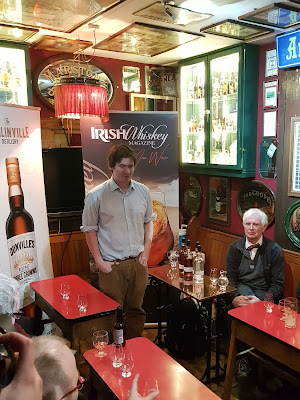 Fionnán himself had a background as a brand ambassador back in the day for Diageo helping to establish the Bushmills Single Malt line up as well as hosting whiskey classes in Bourbon and Branch, a speakeasy style bar based in San Francisco. He also managed to get UC Berkley to agree to let him teach a class on the history of whiskey! As if that wasn't enough, Fionnán is also the author of the book 'A Glass Apart' which looks at the history of Irish Pot Still whiskey.

Fionnán's knowledge of Irish whiskey history was really second to none and his enthusiasm for the subject was truly contagious. It was interesting to here that through his research through old excise records how prevalent the use of oats (because they can pretty much grow anywhere), wheat, rye and other grains was in Irish whiskey production at the very early stages. This of course was to do with the fact that distillation was happening on farms up and down Ireland and was a good way to use up excess grain before it spoiled. It was through this research that the idea was hatched to try to distill a new make that would hark back to those early days of whiskey production.

Of course although the recipe may be equivalent, todays distillation standard is much, much higher so the final product would be an indication of the past rather than a true reflection. What these old excise books highlight too is that the use of multiple grains in distillation, something seen to be at the forefront of whiskey innovation in todays world especially in the U.S. is actually something that was commonplace in Ireland hundreds of years ago.﻿ 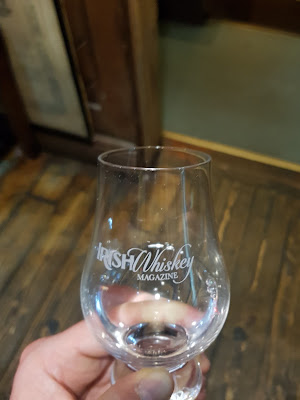 To make this project a reality then a distillery who was open minded enough to give it a crack was required. Step in Echlinville Distillery. We weren't privy to the exact mashbill for this 'new' style of Irish whiskey but Echlinville's Master Distiller, Graeme Millar did at least tell us that oats made up 10% of it. It was interesting to hear to how the oats created a spirit that was thick and oily in the still, like molasses coating the still's walls. It was double distilled and came out at 53% abv.


So what did the new make pictured above taste like? Here's my quick notes from the evening.

Extremely viscous and mouth coating, much thicker than any style of new make I've tried before. Porridge, sourdough bread, biscuits and intense pepper notes. The finish was like licking the glue off brown paper envelopes....sounds rank but I quite liked it! 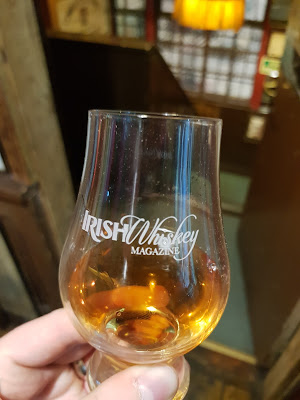 So what was to become of the new make? Well the good folks at Echlinville put it into virgin French Oak casks. About 80 litres of spirit was made as I recall and quarter casks were used for the barrels. The picture above is the new make after 2 weeks maturation in these barrels. Quite the colour I'm sure you will agree.


It was amazing the flavour profile that had developed from just two weeks maturation and it was an extremely interesting dram. Serghios then told us that another evening would be arranged to see how the spirit had fared after 6 months or so of maturation, something that all in attendance were eager for. 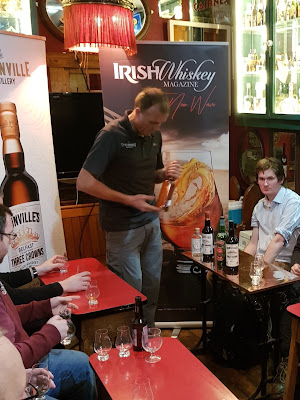 After trying the 'oat' new makes we treated to samples of the Dunvilles brand that are owned by Echlinville distillery. On offer we the VR PX, a 10 year old single malt with a pedro ximenez sherry cask finish that I have already reviewed. The 'Three Crowns' blend and 'Three Crowns Peated' blend which unfortunately I did not get to try as my train was leaving!! What I did get to try is the bottle above the Graeme Millar is holding and pictured below in the glass. 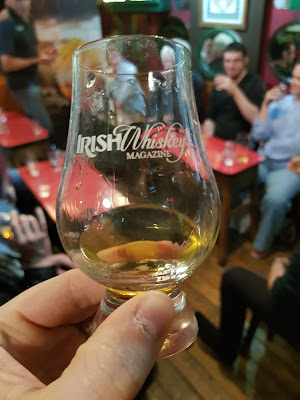 This was the Dunvilles VR Port Mourant Rum Cask finish. This was a triple distilled single malt matured for 15 years in ex-bourbon casks (Bushmills then!) that was then finished for a further 2 years in a 40 year old Port Mourant ex-rum cask and was currently hovering at the 57% abv mark.

Medium bodied and oily, sweet but not sickly and matches the nose very well with the honey, vanilla and tropical fruits up front. Banana bread, caramel, toasted almonds with a long sweet finish.


Just a superb tasting whiskey which I would have bought a bottle of there and then. However, Shane Braniff (owner of Echlinville Distillery) who had joined us for the final part of the evening suggested he wanted to let it sit in the cask for another 6 months or so. Personally I thought it was ready to rock there and then, but I don't own the distillery.

It was a very informative and entertaining evening and I very much look forward to the follow up!
Labels: Dunville's Echlinville Irish Whiskey Magazine New Make The Duke of York Whiskey