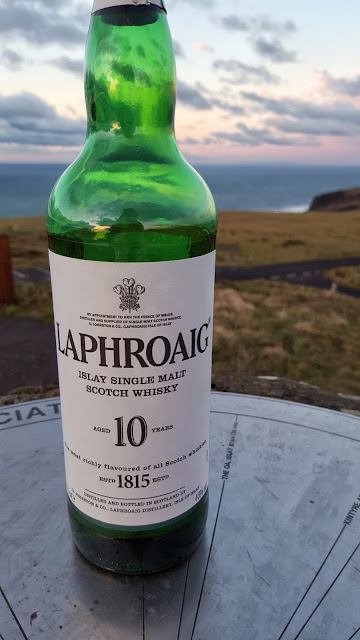 Laphroaig (pronounced 'la.froyg' for those uninitiated in the Gaelic tongue). Your first experience with this liquid campfire will probably be one that you'll always remember. It is definitely a bit of a marmite experience....you either love it or hate it. Initially I fell into the 'hate' camp, but perseverance and drinking more lightly peated whiskies to help build up my tolerance, I mean, appreciation for the peat has now got me firmly into the 'love' camp.


A little back story on my first introduction with Laphroaig. September 2005, on my wedding day to be exact and I was standing in the residents bar of the Crawfordsburn Inn with my new brother-in-law. He wanted to buy me a whisk(e)y and I wasn't going to argue. The bar selection was pretty limited, the usual low end Irish suspects and a couple of scotch blends with the Laphroaig being the only Scotch single malt I remember being on offer. At this point on my whisk(e)y journey I was really only into drinking Irish blends and malts as well as the odd JD & coke.....scotch had been limited to the likes of Teachers & Bells (we all have to start somewhere...don't judge me).

I had been getting more into whisk(e)y and had 'heard' that Laphroaig was very well regarded. Choice made, drams ordered, glass nosed....smoke, a lot of it but a little sweetness in the background....first sip taken....my brother-in-law and I look at each other aghast....cue contorted faces of horror! 'What the heck is this stuff? Who bottled TCP and was allowed to call it whisky? Is this stuff even legal?' My brother-in-law refused to let another drop pass his lips but I dutifully soldiered on, only to conclude that the experience wasn't improving any.

So why the reaction? When drinking whisky you generally associate aromas and flavours of what we are drinking with aromas and flavours we have smelled and tasted over and over again and are therefore familiar with. That's why
you may be able to pick out aromas such as cut grass, nuts, honey, vanilla or your palate then can pick out flavours such as malt biscuit, chocolate, apples and pears etc. However, I don't think that I have met anyone who made a habit of licking charcoal ash, peat briquettes, creosote or the inside of their chimney breast....these are just flavours our palates are unfamiliar with generally. So when you first taste Laphroaig and are dealt a hefty dose of peat smoke, iodine and tar its a bit unusual to say the least!

Anyway, a bit about the distillery now. Laphroaig distillery is based just outside Port Ellen on the south side of Islay and was founded in 1815. Laphroaig is the seventh biggest selling single malt with nearly 3.5 million bottles sold in 2015 and currently the distillery is under the ownership of Beam Suntory. It is one of the few distilleries to still malt their own barley...currently about 20% of their needs with rest coming from Port Ellen maltings.  Their own floor malted barley has a phenol level of 40-60ppm while the rest is around 35-45ppm. All this means is that it is very, very peaty.

The 10 year old is the flagship expression of the distllery. It is chill filtered, contains colouring and is bottled at 40% abv and will generally set you back around £35-37 a bottle but it is usually always on offer throughout the year among the big supermarkets. 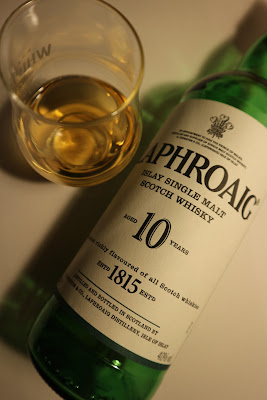 Quite thin body wise. Then we have three distinct steps - Smoke, Sweet, Salt. Spent matches and intense peat smoke give way to vanilla, honey and butterscotch before a bitter lemon note comes from left field to lead you into salty sea spray tang which again gets led back to huge amounts of charcoal ash.

A long, intensely smoky finish that is both salty sweet and mixed with iodine and cask char (You'll probably still taste it the next morning!).

It is a peat monster and likely to be divisive, but I have to admit that I am a bit of a Laphroaig fan boy. Unlike the artist formerly known as Whisky_Rover I have never been fortunate enough to taste a pre-1980's Laphroaig before they changed the still sizes and ultimately changed the raw spirit forever, so I can only judge on what it is now....a peat monster and a job it does well. It truly is an assault on the senses and one that I personally now find enjoyable. It probably is NOT the first peated whisky I would recommend to those who are new to the wonderland of peated whiskies, if that's the case I would direct you to Talisker 10 or even Connemara. However, if you have been drinking Talisker Skye, Storm, 10 year old or Highland Park 12 for example...a wee venture south to Laphroaig may very well be a journey worth taking!