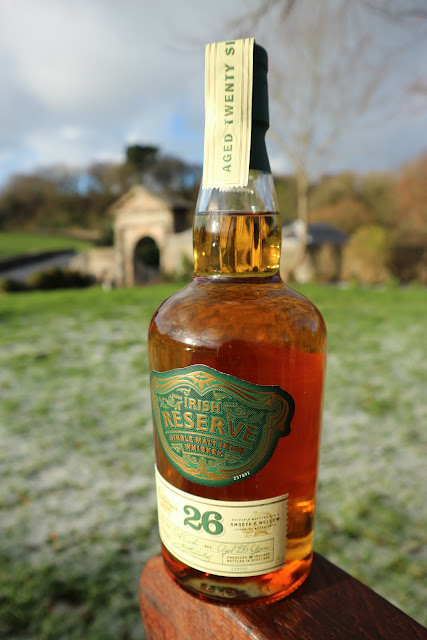 It's back off to the supermarkets for this review and specifically, Aldi. Not content with shaking up the world of food shopping around Europe, the 'discounters' of Aldi and Lidl like to challenge the norms of the supermarket off licence too. Aldi first made waves a few years ago when they released their 'Glenbridge' 40 year old malt (no...your eyes do not deceive you) for £49.99 (again...your eyes do not deceive you)!


Since then both Aldi and Lidl have released their own single malt labels, Glen Marnoch and Ben Bracken respectively. Things get more fun around the autumn of each year when they release old age statement variations. For instance in 2017 Aldi released their 29 year old Glen Marnoch single malt and this 26 year old Irish single malt for the princely sum of £39.99 or €49.99! Lidl released a 22 year old Islay malt for £45. Absolutely crazy money for such old age statements.

Unsurprisingly there was a bit of a clamour to get these bottles. Up here on the north coast I was hampered even more so by the fact that there are no Aldi's in Northern Ireland!! So a special shout out goes to my good friend Paddy Doherty who sourced me one in Buncrana which is further north than my hometown of Coleraine even though Buncrana is in the south of Ireland. That's pure Irish gold for you there!

As regards information pertaining to the liquid inside the Aldi Irish Reserve bottle, it's scarce. All the bottle tells us is that its aged for 26 years in oak casks. As such the online community has been speculating furiously as to where it has come from and the choice is limited! Bottled in 2017 and aged for 26 years at least means it was distilled, at the latest in 1991. At that time only two distilleries in Ireland where producing single malt, Bushmills and the 'toddler' of a distillery in Cooley.

Many have stumped for Bushmills who apparently were fooling around with double distillation at that time. Having spoken to some inside Bushmills they are adamant it isn't from them. Taste profile wise I have to say that I think it tastes like an older Tyrconnell (produced by Cooley orginally, now produced by the Kilbeggan Distilling Company who are Cooley rebranded). 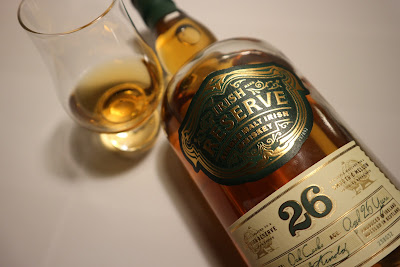 I'm immediately hit by woody notes plus a little metallic edge. Then creme caramel, vanilla and milk chocolate. Eventually the fruitiness breaks through - apples, pears, tinned pineapple in syrup, orange peel and a green herb note at the finish.

A very thin mouth feel, even the legs in the glass run thin and quick. Quite dry and tannic for me with the metallic note following from the nose, its slight but apparent. Malt, dark brown sugar and just a hint of the fruitiness suggested by the nose before the oak dominates.

I can't say I'm massively impressed by this, neither am I overly disappointed. At £40 for the bottle with such an age statement it had to be tried but you can get a better Irish experience cheaper from the likes of the Bushmill's 10 year old, Jameson Black Barrel or Powers Three Swallows. It is perfectly acceptable for the money though and does make you wonder about the pricing of equivalent age Irish and Scotch whiskies. I cant help but feel that this particular whiskey would have benefited from about 5 years less in the cask plus being bottle at around 43%.