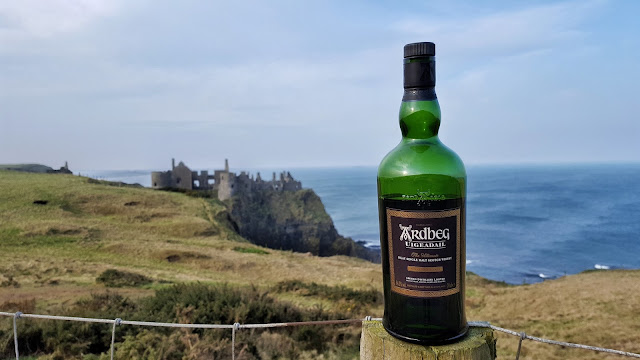 Ardbeg Uigeadail (pronounced Oog-a-dal). Ardbeg Oogie. The Oogie Monster. Since its release in 2003 this is an Ardbeg that has made itself a firm favourite amongst Ardbeg fans. In fact the Ardbeg Committee members voted this their favourite Ardbeg release and the eponymous Mr Jim Murray crowned it his 'World Whisky of the Year' in 2009!


Even with all that praise there is still very much a clear divide within the Ardbeg ranks - you either love the Oogie or your affiliation lies with the other cask strength core range star that is the Corryvreckan. I'm a fence sitter - I like them both.

When the Uigeadail was launched in 2003 it was considered to be quite different from what is bottled today. It is made up of first and second fill ex-bourbon cask matured spirit that normally goes into the 10 year old plus some sherry matured spirit.

Originally at launch the Uigeadail contained some sherry matured spirit from the 1970's, casks laid down before the distillery was mothballed in 1981. So a plan was conceived to marry these old casks with stock normally used for the standard 10 year old. This vatting would have the youthful exuberance of the standard 10 married to some sticky sweet vintage sherry casks to create 'a taste sensation'!

This plan was obviously a success due to the high praise that the Oogie Monster consistently receives. But since 2009 Ardbeg aficionados would say that the standard is not quite as it was upon release which would lead us to believe that the stocks of well aged sherry matured Ardbeg have been exhausted and replaced by younger sherry matured stock probably laid down since the distilleries takeover by Glenmorangie in 1997. Indeed it is thought that the bottling that Jim Murray tasted for his 2009 Whisky Bible was from 2007.

My bottle is from 2015 so is from the new end of the spectrum. It's bottled at 54.2%, is non-chill filtered and natural colour. I can't remember where I bought it or how much it cost but the Uigeadail is readily available from the likes of The Whisky Exchange or Master of Malt for £56.95. 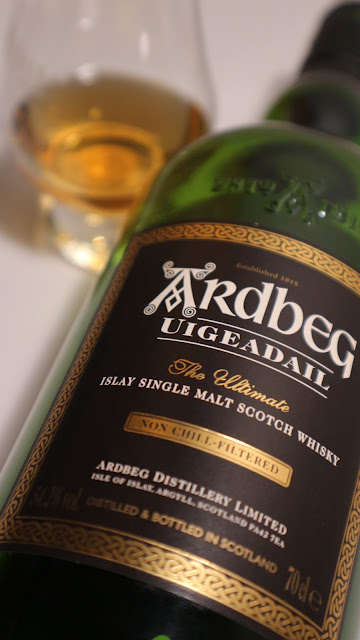 The simplistic flavour path is as follows: sweet to spicy to deep smokiness followed by a lingering mix of ash and strong black coffee.

Initially syrupy sweet on arrival with raisins, honeycomb and a little vanilla essence, then salted peanut butter before a burst of spice, chilli flake heat which leads to smoked meats, a hint of bacon and honey glazed ham. Water brings more chilli heat and some sherry nuttiness, a little coal tar and bitter dark chocolate.

The finish is pleasing smoky with some ash, cocoa and espresso.

Another strong candidate in the Ardbeg core line-up. While maybe not the giant of a dram it was back between 2003 and 2009 this is still a very well made whisky with plenty to occupy your nose and palate. The fact that its presented at cask strength is another bonus and I think at the price it represents very good value.
Labels: Ardbeg Islay NAS Scotch Single Malt Uigeadail Whisky