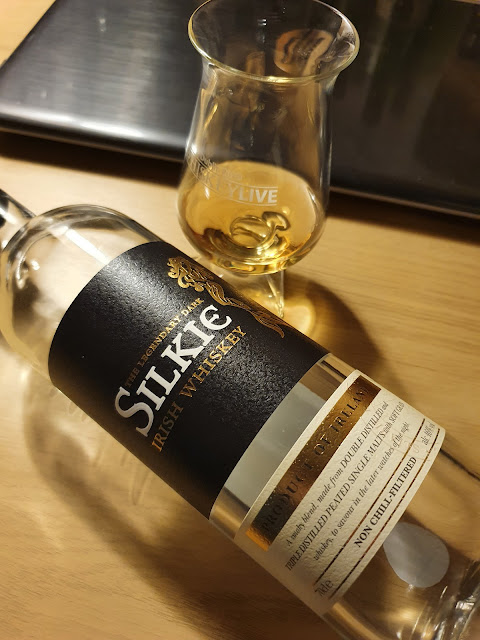 Redemption. Something that we all at one time or another have sought or are seeking. We all make mistakes and are therefore glad of a second chance to put things right. Whether it’s failing your driving test, forgetting to do an assignment or making a bad first impression (you know...coming across a bit Ralph Malph rather than The Fonz), we all hope that we will be allowed to rectify things and set the record straight.

Now on Malt, we seem to have built up a reputation for being a bit cantankerous, mouthy and well...opinionated. Not everyone likes the cut of our jib.... or our scores. I can imagine that many a whisky producer has butterflies in their stomachs when they know that one of their creations is going to end up here on Malt.

You may find this remarkable, but I have been known to hand out the odd low score. I have to admit that I find handing out low scores difficult, I don’t enjoy it. I would much rather be treated to a feast of above-average beverages, but as you, dear Malt reader, already know, we don’t live in a perfect world and that there is a lot of muck out there. I’m pretty sure the reason why you keep returning to our pages, is that we are not afraid to tell it how it is, even if we don’t enjoy doing so. This also means that when any of us here on Malt give an 8, 9 or the very, very occasional 10: you take notice.

Looking through my review history on Malt, I can pick out names of the rough stuff without even having to open the full review... Glen Fairn, Aerstone, Teeling Single Pot Still, Jameson Signature, Proper Twelve and of course the truly miserable West Cork Glenariff Peat Charred Cask. Oh...and I shouldn’t leave out the Springbank 15.

Now, just because I had rather unpleasant experiences with all of the above, doesn’t mean that I won’t at some time revisit either that exact expression, or at least, the brand as a whole. That’s the thing about whisky...we often actively retread old ground in hope of offering redemption. Hope that things have improved and we can actively endorse a product. It’s why Jason so manfully returns to Jura on a regular basis, or his favourite Orkney distillery, even going so far as to do a Glenfiddich vertical many moons ago, just to see how the old supermarket stalwart was faring.

Another whiskey that made it into my league of horror was the first iteration of The Silkie. I’m quite sure and certain that I was not flavour of the month with the folks at Sliabh Liag Distillers when that review was posted. But as someone told me recently, don’t fix the reviewer, fix the product.

I spoke to James Doherty from Sliabh Liag at last year’s Whiskey Live event in Dublin, in fact, it came to my attention that he was actively seeking me out. My overactive imagination did lead me off into daydreams of Queensbury Rules in the Dublin Castle grounds, or maybe even pistols at dawn but instead, it turned out to be much more sedate.

James was super polite (if he was bristling with unbridled rage below his calm exterior, he hid it well) and remarked that was he was disappointed in my review and that he certainly didn’t agree with it. James also told me that the review had had an impact on sales of the whiskey, even costing him a contract with a major pub chain. With tongue firmly in cheek, he asked if I could pull the review and give him some respite!

Of course, I told James that first off, my lovely editors would tell me to take a running jump if I asked to pull the review, but that also I stood by the review of the Silkie version 1....just make a better blend I implored.

I was then told that quite sizeable changes had been made to the blend, not only in its components, but also in its presentation. On top of that, James let me sample the new version of the Silkie called the Dark Silkie, which was peated. First impressions were good, but we have had to wait until World Whiskey Day this year for its launch. I became aware of this on twitter the Sunday following World Whisky Day and in the space of about 10 minutes, quite a number of the #SundayNightSup crew had ordered a bottle, myself included. I also bought The Silkie to run my eye over version 3.0 of the blend that had so horrified me in my original review.

Let’s see how things have changed then! Sliabh Liag kindly sent me the breakdown of the blends, which I believe, will be on their website soon.

Now, the Dark Silkie. This has been made with 15% double distilled single malt matured in bourbon casks, 15% triple distilled peated single malt (55ppm) matured in sherry casks and 70% grain whiskey matured in virgin oak casks. Again, this is bottled at 46%, is non-chill-filtered and is also natural colour.

I paid £33 for each bottle, from the Sliabh Liag website.

Straight away kudos to the guys as Sliabh Liag for the presentation of these whiskies and for making fairly major overhauls in the components too. Version 2 of the Silkie was 25% malt, 75% grain with version 1 being even more grain-heavy, but I don’t know the exact ratio.

On to the tasting notes then. 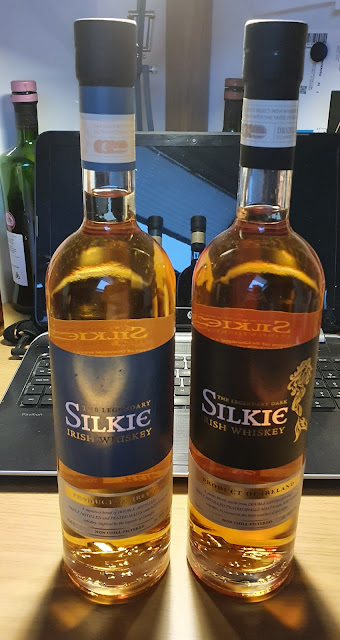 What a turnaround! Fair play to everyone involved at Sliabh Liag for bringing The Silkie back into the game. Not only has the blend itself been adjusted, but the extra ABV and the non-chill filtration really make a difference....it actually has a mouthfeel now! Even better is that it delivers flavour. Sure, it is a fairly simple affair, but the nose and palate, balance well and for the money, there is little to argue over. I’d certainly recommend it over a Red Bush or Jameson any day.

The Dark Silkie though is a cut above, a more appealing nose and palate and for the same price as The Silkie, I’d recommend it all day. This is an excellent value blend that would definitely be a good starting point for those looking to get into peated whiskey. Approachable, balanced and just really tasty. I can see myself making this a regular purchase.