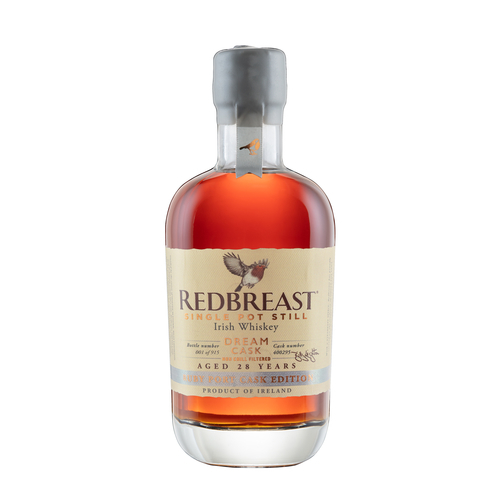 This review very nearly never happened, at least not in this form. Unlike Taylor who is well known for courting the opines of the whisky Twitterati to steer his reviewing course, I generally never proffer options when it comes to my reviews. Instead, I nonchalantly spew out whatever takes my fancy without much thought at all toward what the great Malt readership might actually want to read.

Initially this review was going to be a comparison between just two whiskies…. the Redbreast 27 year old, the newest edition to the core range and the Redbreast Dream Cask 28 year old Ruby Port cask edition (the third of the Dream Cask releases). Why a comparison between these two? Well, the 27 year old has a Ruby Port component in its make up. So many were wondering what was so dreamy about the new Dream Cask release that came literally a few months after the 27 year old was brought to market? Was the Dream Cask just the same liquid with an extra year age statement and a dumpy bottle? Well, we’ll get to that later.

To my surprise and that of many others, it must also be said, I received one of the ‘influencer’ samples for the Dream Cask 28 year old. It was pointed out to me on Twitter that being grumpy seemed to be paying off (this being the first time I have received any of the Dream Cask releases in this manner).

While on twitter and chatting about comparing the 27 year old and the new DC I remarked that I also had samples left of the first two Dream Cask releases. It was at this point the #CaskStrengthCrusader, David Marra suggested that I review all four and see how the Dream Casks stood up to each other side by side. Now as I have already reviewed the DC32 and DC20 I originally didn’t really see the point in re-treading old ground. The more I thought about it though the more I warmed to the idea. If nothing else it would also be an experiment to see if, over time, I might change my mind on the scores I gave the first DC releases. Hence you now have a review covering all four releases, and I’ll list them in order of release date.

Now as we have four whiskies to review here, I’m going to keep the preamble relatively short so as not to take up too much of your valuable time dear Malt reader. If you are interested in the make-up of the Dream Cask 32 year old & 20 year old, I then encourage you to look at the previous review from October 2019.

The Redbreast 27 year old is the oldest member of the Redbreast family and is now part of the core range. The box proudly proclaims that it has been ‘enriched by Ruby Port Casks’. This is not finished whiskey though, no, all the components are fully matured in the casks of choice for at least 27 years. Those casks being first fill and refill ex-bourbon casks, oloroso sherry casks and ruby port pipes. It is also bottled at cask strength with this release being bottled at 54.6% abv. It is priced at around £460/€500 per bottle and thankfully the bottle is the full 700ml in comparison to the 500ml bottles of the Dream Cask range.

So, is the Dream Cask 28 year old Port finish just the 27 year old but a year older? No. It is a vatting of just four barrels. The first two barrels were refill ex-bourbon cask distilled in 1991. Another 1991 ex-bourbon cask that was re-casked in 2011 into a sherry butt and finally, the oldest element, was a 1989 bourbon cask that was re-casked in 1995 into a Ruby Port pipe. These whiskies were then vatted together before a 105-day marrying time in a Ruby Port pipe. Released for World Whisky Day in May of this year it was bottled at 51.5% abv with an outturn of 915 bottles and priced at €490. It sold out ridiculously fast and expect to pay a lot more at auction.
The tasting notes are as follows: 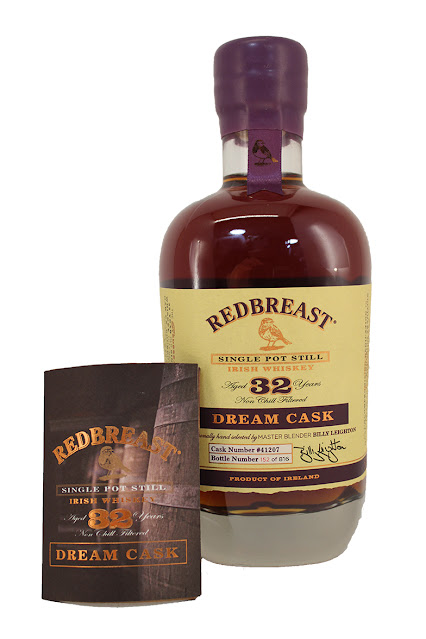 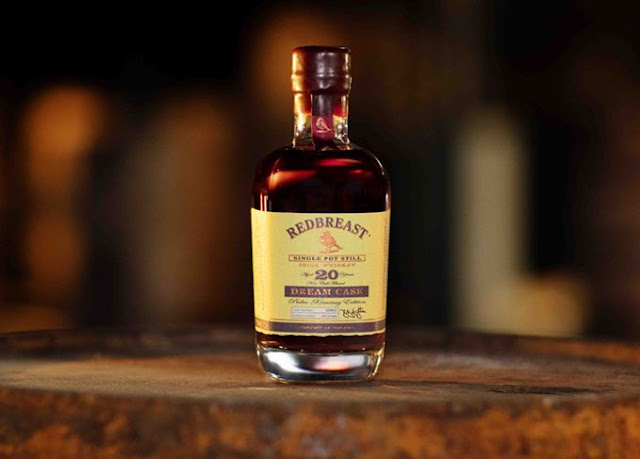 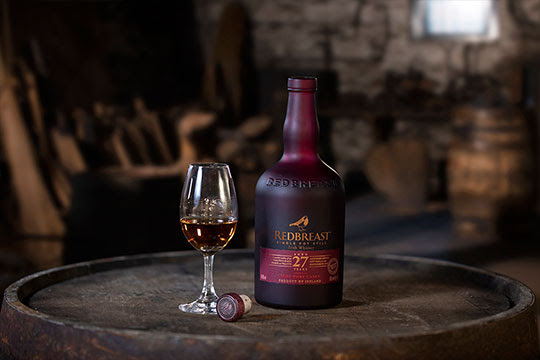 On the nose: Such an inviting nose – vibrant, fresh and juicy. Initially its freshly sawn wood and cherry menthol. Then ex-bourbon notes of vanilla, caramel, desiccated coconut and cask char. Tropical fruit of mango, papaya and pineapple. Danish pastry with raisin, date, cinnamon and clove.

In the mouth: Fruity and jammy although not the oiliest Redbreast ever – it does feel ever so slightly thin, somewhat like the DC20. Plum, peach, apricots and red grape. Morello cherry jam and passionfruit. Christmas cake spices followed by cracked black pepper, dry oak and chilli heat. Milk chocolate and candied orange. The finish is a bit short with a wasabi-like-heat that overpowers the tropical fruit. 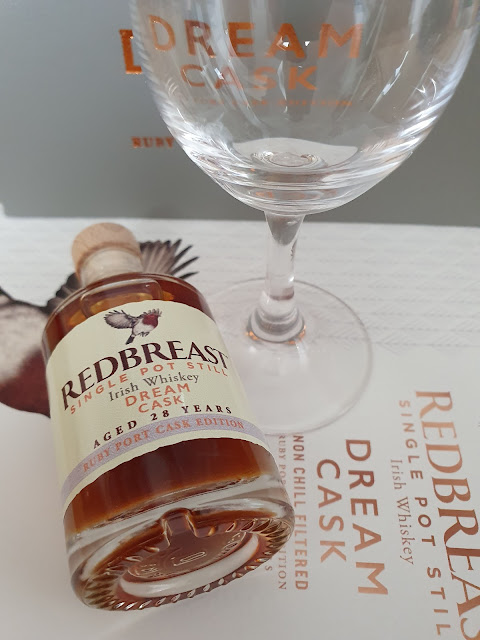 In the mouth: Silky – no alcohol burn at all. Plum, mango and stewed raspberries and blackberries. Coffee cake topped with walnuts. Muscovado sugar, cinnamon, nutmeg, raisins and dates. A gentle pepper heat mid-palate with toasted oak and peppermint. It then comes back round to orchard fruit, clotted cream and vanilla. The finish is long with peppermint, dark chocolate, clove and tropical fruit.

I can honestly say that I have had worse line-ups to review and in reality, there was very little pain involved in carrying out this scientific research on behalf of you, the Great Malt Readership!

But I am sticking to my guns regarding the Dream Cask 32 year old. Frankly, it is a superb whiskey and I’d happily of paid the original asking price of €500 for a bottle. As it stands you may be looking at over four times that price now to prize one from the clutches of one of the lucky sods who own a bottle. So why stick with the 8 out of 10? Well, it’s still the fact the palate and finish just, and I mean just, fall slightly short of that heavenly nose which is probably one of the best noses you can find in a whiskey glass. For that reason, it falls just short of being stellar (but I am probably nit-picking here).

I’ve upped the marks on the Dream Cask 20 year old by one point. 5 out of 10 possibly was slightly harsh but I still point to the fact that by adding a bit of water to it, it quickly veers in the Lustau direction which is markedly cheaper and only loses around 6% abv over its much pricier kin to start off with.

Onto the 27 year old. If there is one common theme throughout this review it’s that Billy Leighton and Dave McCabe certainly know how to construct a fabulous nose in a whiskey. All of them here are thoroughly excellent and impel you to take your time over them. But as with the Dream Cask 32 it’s on the palate and finish that things just stumble slightly for me. I’m not sure if it’s too much wood influence from the ruby port pipe component on the 27 year old but that wasabi like heat on the finish ends up overpowering the tropical fruit notes and just leave it all a little unbalanced. For me, I’d rather buy three bottles of the 21 year old over one bottle of the 27 year old. In fact, for the price of the 27 year old you could treat yourself to pretty much the rest of the core range including the yearly 12 year old cask strength release, which again I’d probably vouch for over buying the 27 year old.

Finally, the Dream Cask 28 year old. This will be divisive (and let’s face it when have I ever been known to be divisive before?) but this is my favourite Dream Cask release so far and thankfully brings them back on the track to greatness after the minor slip that was the DC20. Beautifully balanced between nose and palate this is much different animal from the 27 year old. I’m actually a bit annoyed at myself that I chose not to try and buy a bottle of this at release. I know €490 isn’t cheap, especially when you think a 700ml bottle would have been €686, but it would have been worth every cent.