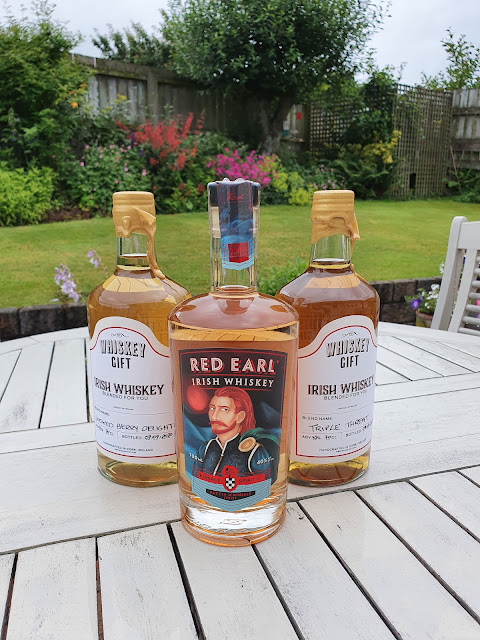 I have said before that I’m always amazed that people send me anything to review and I still stand by that statement. I imagine those that do take the step to send me anything visualise the forthcoming review as like a game of whiskey Russian Roulette. Okay, maybe not that hair raising, maybe more like the TFI Friday classic Baby Left or Baby Right (for the unaware look here). Either way, it’s a game of chance…. will he or will he not like it. Will it be Grumpy Phil or Moderately Pleasant Phil?

If I’m contacted directly by a company to ask me if I’d like a sample of something to review, I always point out that just because I’m willing to take something for free that in no way means that they are guaranteed a positive review. I will say it how I see it.

One such brave soul was Ernest Cantillon of Kinsale Spirits who reached out to me via Instagram. Ernest had been pointed in my direction by fellow whiskey geek Chris Hennessey, he of Aqua Vitae fame. Ernest wanted to send me a bottle of their new blend the Red Earl and also gifted me a €100 voucher to use on their Whiskey Gift whiskey blending site.

My reply was thus ‘Hi Ernest, thanks for reaching out. I hope Chris also filled you in on my reputation too (laughing emoji). As I state to all those that offer to send me anything, I always say what I think about the product. Hopefully, you are comfortable with that. I’m not always popular due to that stance (laughing emoji).’

Amazingly, Ernest still proceeded to send me a bottle of the Red Earl and I threw another €50 on top of the gift voucher and ordered two bottles from whiskeygift.

So, what’s this Red Earl label about then? Well, Ernest and his partners hail from Kinsale, the site of a famous battle during the Nine Years War in Ireland, which took place between 1593 and 1603. This was an uprising of Irish clans against the Tudor conquest of Ireland, with many of the battles taking place in the province of Ulster.

The Battle of Kinsale itself took place in January 1602 with the Irish by this time being supported by King Phillip II of Spain with a deployment of 3,500 Spanish troops. Hugh O’Donnell (The Red Earl), against advice, led a surprise attack on the English only to be countered by a surprise cavalry charge which led to a total rout of the Irish forces. The Spanish in Kinsale surrendered to the English after their ally’s defeat.

Red Hugh fled to Spain in an attempt to garner more support and extra troops from King Phillip II, but was allegedly poisoned by an English spy and died in Valladolid in September 1602.

The Red Earl whiskey then is the first in a series of whiskies to celebrate local Kinsale legends. Much like the Titanic, you get the sense we like to celebrate failure here in Ireland. The nod to the Red Earl is that the whiskey is finished in Rioja casks. You can see Ernest’s explanation of the idea behind the whisky’s genesis from the Belfast Whiskey Week World Exclusives video at the 2 hrs 43 mins 30 secs mark.

In the bottle, we have a blend of Great Northern Distillery (GND) grain and malt whiskies. 90% grain, 10% malt both at 3 years old that have been matured in ex-bourbon casks, then ex-sherry casks and finally has a 6-month finish in Rioja casks. It is bottled at 40%, is natural colour and costs £39 a bottle.

Moving on to the Whiskey Gift bottles. So again, the lads have access to GND distilled and matured spirits and invite you to blend your own bottle either for yourself or for your friends and family. They even give you a helpful guide on the site recommending the approximations of spirit types to run with….70% grain, 30% malt/pot still is their recommendation.

Now stupidly, I didn’t write down my blends constituent parts so I’m going off memory now. The ‘Triple Triple’ – I think an equal blend of triple distilled grain, malt and pot still with a little sherry maturation thrown in on the malt side. This came out at 43% abv.

My other bottle I cunningly called ‘Smoked Berry Delight’. A blend of triple distilled grain, triple distilled malt matured in red wine casks and triple distilled peated malt. Offhand, I think this was around a 50/40/10 split. It was bottled at 41% abv. I’m going to score the Red Earl as it is available at market option with just tasting notes for my blends.

On the nose: youthful grain spirit very apparent. A slight winey note with acetone thrown in too. Then, we get vanilla, light caramel notes with strawberry laces sweets and fabric softener (fresh linen). Some sawn oak too.

In the mouth: There’s not much to this I’m afraid. Thin mouthfeel with little sweetness on arrival that treads into tart territory quite quickly. Lemon zest, pink grapefruit and some oak tannin with a hint of white pepper. The finish is thankfully short with predominantly citrus notes and mild oak.

On the nose: Creamy with sourdough bread, draff and a touch of envelope glue. A light wine note with a floral top note. Very spirit-driven with the pot still greenness dominating. Time brings honeycomb ice cream.

In the mouth: Not a lot of sweetness upfront – the cream quality follows the nose with the green pot still making an appearance soon after – wet cardboard and bitter green herbs along with citrus pith. Eventually, there is a modicum of sweetness – mild caramel, apple, vanilla and mild spice mid-palate. The finish is short and again on the tart, citrus side.

In the mouth: A caramel sweetness on arrival followed by a burst of pepper heat with some black tea bitterness and a light ashy note. The finish is short but peppery and ashy.

So, please take this review the way it is meant to be taken. I don’t mean to kill a brand or company before they start, I doubt I have that much clout anyway, but rather take this as constructive criticism. We’ll start with the Red Earl.

Some people hate the label but actually, I don’t mind it. The label stands out and grabs your attention. My issues begin with what’s in the bottle. If I wanted to buy a blend that was 90% 3 year old grain I certainly wouldn’t spend nearly £40 on it…. I mean for an extra £2 I can buy Redbreast 12 year old in my local Sainsburys. Instead, if I was a masochist, I’d buy Johnnie Walker Red Label or Grants for £15 a bottle. Grain can be an excellent component but it needs time to mature, so if used at a young age it needs a higher malt component to give added body and complexity. I mean Bushmills Original is a blend of 5 year old malt and grain whiskies and I’d only score it a point higher.

Then there is the finishing. Let’s be clear finishing is not innovation. It’s been done to death and generally is a clue that something isn’t right in the base spirits that you want to cover over. For it to be successful it also needs to deliver something both on the nose and palate and the Rioja casks have not delivered in this instance.

Finally, the price. I won’t labour the point but please just go on Master of Malt, The Whisky Exchange or whoever your retailer of choice is and look at what £40 can buy you…. the options are long and in a lot of cases at the £40 mark substantially better in terms of experience than the Red Earl.

Now onto Whiskey Gift. First off, the labels. I hate being negative guys (genuinely I do) but these do not speak of quality or being gift-worthy. To me, they smack of seaside gift stores peddling tat. Honestly, if I was gifted this in looks alone, I’d be disappointed.

Then there is the liquid. It’s not great value for the entry fee. Young, spirit-driven whiskey at much too high a price. I took the liberty of heading to my local Sainsburys to see what I could get for the same money…. converted to pounds about £135 or about £68 a bottle.

In Irish whiskey, I could get Powers Gold Label, Black Bush and the Pogues Single malt for £68. From the U.S. I could buy Jack Daniels, Woodford Reserve and Makers Mark (albeit on offer) FOR £68. From Scotland, I could get the entire Glen Moray Elgin range for £68.

Essentially what I’m getting at here is that for the outlay of two bottles of young GND whiskey I could buy at least 6 bottles from my local supermarket that are acceptably drinkable on their own or I could amuse myself by making my own blends from them. I realise in the South of Ireland it may be a case of 4 bottles instead of 6 due to taxation and excise differences in the pricing but you get my point.

Do I see Whiskey Gift as a good option at present? No.

I’m sorry to come across as so cantankerous but as a value proposition or experience proposition, neither the Red Earl or Whiskey Gift translate well. Hopefully, this will change going forward.

P.S. You got Grumpy Phil today