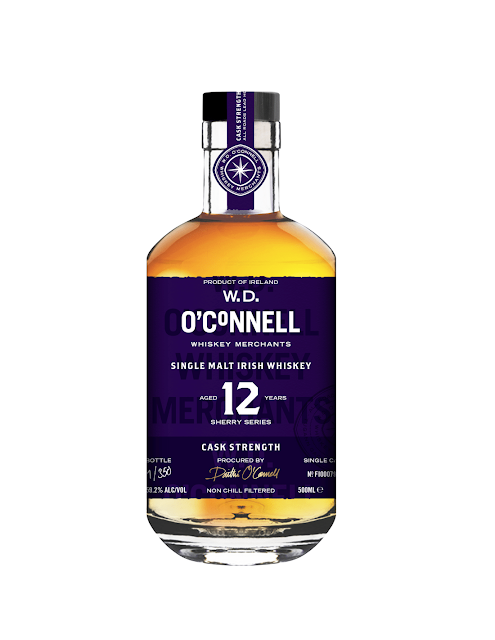 We are back with instalment number three of all thing’s W.D. O’Connell here at Malt Towers. I had the pleasure of introducing you to Daithi O’Connell back in March 2020 when we looked at the Bill Phil Single Cask and 17 year old single malt in the PX series. Mark (the Irish one and not the boat shoe wearing posh co-editor Mark) covered two cask strength releases of the Bill Phil and PX series back in September 2020.

Daithi reached out to Mark and me just before Christmas with samples of the Bill Phil Batch 2 and a new cask strength release…. this time a 12 year old sherry cask matured Bushmills. In the interest of sharing workloads, it was decided that this time Mark and myself would join forces and jointly submit tasting notes like an all-Ireland Statler & Waldorf. I give to you Ireland’s grumpiest whiskey reviewing partnership, Crawford & McLaughlin…. although to be fair that does sound more like a new civil engineering start-up rather than a whiskey reviewing powerhouse of cantankerousness.

It has to be said that I don’t know whether to admire Daithi’s bullishness or feel sympathy for his foolishness in sending us samples to review! I suppose that will clear itself up in the conclusions. Before we get onto the whiskies, I had a quick chat with Daithi to discuss his future plans for W.D. O’Connell Whiskey Merchants. In the piece, in March of last year, Daithi outlined his desire to branch out into other whiskies and spirits a la Cadenhead’s and it seems this is the year to follow through on those plans but with some interesting twists.

Coming early this year Daithí will be launching a cask share programme which simply allows you to reserve a bottle from various cask types in advance of bottling. Limited quantities from 50-100 bottle only. For example, you pay say €50 upfront for your bottle with the tax, duties and shipping paid when the bottling is done so allow around another €20 after the prescribed maturation period. The bottlings from this cask share program will have their own label design and will be at cask strength to simplify things. The advantage of this program is that it offers the buyer discounts starting at a minimum of 20% of the expected RRP and anywhere up to 50% particularly of some of the older bottlings and it allows W.D. O’Connell more time to further curate its portfolio. Daithí imagines he will do this for up to 12 different casks this year if the demand is there and it won’t all be Irish whiskey either. No good to his word Daithí has been sourcing scotch and other whiskies too.

Another exciting avenue Daithí is looking at is having his own spec mashbills contract distilled so that he can mature them himself and have whiskey with mashbills that are specific to the W.D. O’Connell brand, pot still being of particular interest.

Let’s look at the whiskies on offer today. First up is something you don’t see much of these days from an independent bottler, a Bushmills distilled in December 2008 and matured for a full 12 years in a European oak 3rd-fill ex-oloroso sherry butt. Bottled at a cask strength of 59.2% and with just 350 50cl bottles released at €140/£126.95.

What’s that? Was that an audible sharp intake of breath at the price listed for the Bushmills? £127 for a 50cl bottle of cask strength Bushmills…. are you serious? Sadly, these are the market conditions that Daithi and others are now playing in when searching for aged Irish stock. It’s nigh on impossible to source aged stock directly from the big 3 unless you have ridiculously deep pockets and are planning on buying up large parcels of casks. The next choice is third party vendors and prices in this realm are rising exponentially as aged stock becomes rarer and rarer. You though 2020 prices of old Irish whiskey were bad…. buckle up, guys!

It’s also important to pay attention to what is going on at auction too with the latest Bushmills 2008 Muscatel Cask Strength offering which had an outturn of around 1400 bottles (albeit 70cl bottles) hitting €250 and above for something that retailed for €100…and you will have to buy it at auction now folks as it sold out in double-quick time at retail. Maybe that makes the asking price for this offering a little more palatable.

Second, under the microscope is Batch 2 of the Bill Phil series. Triple distilled, heavily peated single malt from Great Northern Distillery which is matured in first-fill bourbon casks and is just over 4 years old. Bottled at 47.58% abv with an outturn of just over 500 bottles and priced at €65/£61.95 per bottle. This has had a strong run so far on Malt so let’s see if that continues.

On the nose: The sherry is apparent immediately with dried fruits, marzipan, orange oils and hazelnuts. Wood shavings a plenty with sweet fudge, butter croissants and a touch of olive oil. The alcohol is present but not aggressive, water brings forward a touch more fruit.

In the mouth: Touch of apricot on the front palate, buttery scones, caramelized apples and an abundance of wood spices. Vanilla, toffee and a touch of that distinct Bushmills banana note. A drop or two of water makes this quite decadent, becomes more distinctly oloroso sherry forward with nuts, fruits and spice. Long, dry finish with lingering wood spices as the glass empties. 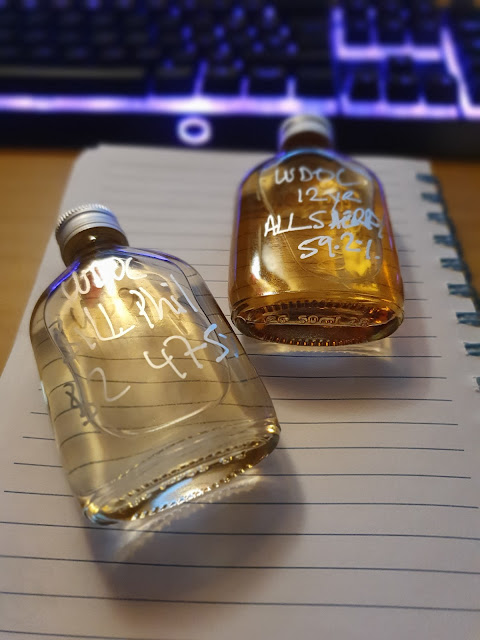 On the nose: Soft sweet peat smoke, vanilla, buttercream and biscuits. There’s a hint of lime leaf, vanilla ice-cream in a wafer cone, pears and crisp apple notes. There’s some green foliage and peat must.

In the mouth: An abundance of peat with a touch of linseed oil, paraffin and old cloth. There’s citrus fruits, orchard fruits and a rounded orange chocolate note which invites you back in. Cacao nibs and a bite of fig roll biscuits. The finish is like smoky fruit salad chewy sweets.

On the nose: A lovely nose. Brined lemons, thyme, sage and a hint of barbequed pork. Still some industrial heft with diesel and ashy peat smoke. Barbequed honey-glazed apples and pears with earl grey tea.

A welcome all sherry single cask to the Irish Whiskey fore which doesn’t quite hit the heights of Daithi’s previous releases but is a nonetheless solid quality Single Casks which is a joy to spend time experimenting with.

There’s a trend starting to materialise with the Bill Phil range, it’s pretty simple, if you’re a fan of bourbon matured peated Single Malts, you’ll not be disappointed.

The boy Daithi has done well once again and for once I’m not Ireland’s grumpiest whiskey writer (sorry Mark!). I’m wracking my brains thinking back to the last time there was an all-sherry Bushmills released in cask strength form, none that I can remember in the last 5 to 10 years (maybe some of the elder statesmen of Irish whiskey can put me right on that), so it’s a joy to try this Bushmills from that standpoint alone. No acing or finishing, just straight up maturation and the good news is that it delivers. A good integration of spirit and cask delivering a really tasty drop. For me if this was a 70cl bottle then I would probably have stretched to an 8. If you can get past the asking price then I don’t think you will be disappointed with your purchase.

The Bill Phil range continues to impress too although I did feel that this one was tamer…. or possibly refined is a better way of putting it, than the previous releases. It lacks the vitality of the first single cask release somewhat but it’s a really good drinking experience nonetheless. Creamy and flavourful it definitely drinks much older than it is which shows that the lads at GND are doing something right with their peated malt.