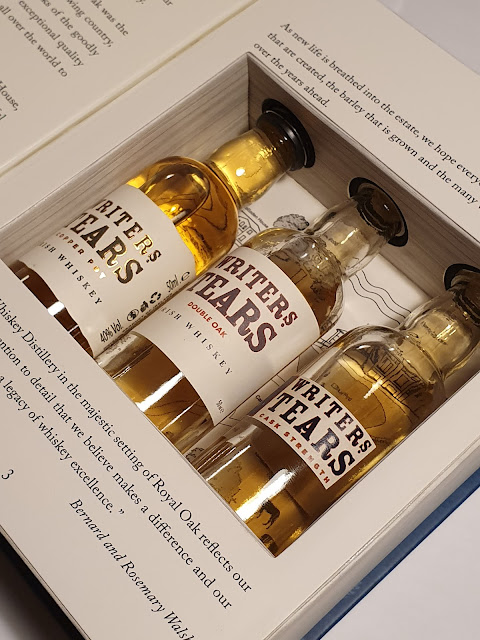 It really is amazing how time flies, especially here in Malt-land. It's been over two years since my one and only review of a Writers' Tears expression, which was the only single malt in the line-up, the Red Head. After that review, the good folk at Walsh Whiskey sent me out a sample pack with three whiskies to see if they could improve on the score I previously gave. This pack included the Writers' Tears Copper Pot blend and two Irishman Single malt expressions.

I had been meaning to review those many, many months ago but like many best-laid plans, sometimes those plans don't come to fruition quite as expected. So, the samples lay in my sample collection and were added to the ever-growing list of must review stock.

Recently though, I took part in a tweet tasting with the Whisky Wire where I was sent further samples of both the Writers' Tears and the Irishman brands and so I felt that it was time to pull my finger out and fulfil the plan! This review looks at the Writers Tears samples only and I promise I will come back to the Irishman single malts soon.

This was originally meant to be a review of three Writers' Tears expressions, but then the super chap that is Mickey Donnelly of Belfast Whiskey Club, furnished me with the recent Travel Retail release of the Japanese Cask finish Writers' tears. I thought I may as well throw that in too just in case any of you good Malt readers will be travelling through either the Dublin, or Cork, duty free anytime soon.

As there are four whiskies now being reviewed, I've decided to keep the preamble brief, so after a bit more information on the whiskies we'll get stuck into the tasting notes.

Writers' Tears is an unusual blend for Ireland in that no grain whiskey is used. Instead, this is a blend of triple distilled Single Malt and triple distilled Single Pot Still whiskey, both of which have been sourced from Bushmills and Midleton respectively. The blend is roughly 60% malt and 40% pot still and the grain is unpeated.

The Copper Pot is the entry point into the Writers' Tears range and is fully matured in American Oak ex-bourbon casks. It is no age statement (but after reaching out to Walsh Whiskey they confirmed that this is a blend of ages that is typically around 8 years old), is bottled at 40% and I think it’s safe to assume chill filtration and colour have been used. This is available on Master of Malt for £33.99, or via the Whisky Exchange for £36.75.

The Double Oak takes the same base recipe and adds whiskey matured in French Oak ex-Cognac casks from the Allary Cooperage in France. This time it is bottled at 46% and is non-chill filtered and will set you back £44.95 on Master of Malt.

The 2019 Cask strength is again ex-bourbon matured, non-chill filtered and bottled at 53% (again, although no age statement Walsh Whiskey confirmed this is a blend of ages but typically around 10 years old). This bottling strength has caused some online furore as no one is sure if this is natural cask strength or whether Walsh Whiskey cut the spirit to this point as each release has been 53% on the nose. The 2019 release is limited to 3,780 bottles and is priced at €130 at the Celtic Whiskey Shop and is £118 on IrishMalts.com.

Finally, we have the Writers’ Tears Copper Pot Japanese Cask finish. Aged in ex-bourbon barrels before a 9-month finish in one of two Japanese Mizunara Oak casks. This expression was bottled at a healthy 55% abv and was launched in time for Ireland's much hyped trip to the Rugby World Cup finals. It is only available in either the Dublin or Cork outlets of The Loop Duty Free and is priced at €100 (duty paid) or €84 (duty free).

On the nose: A sweet nose – well honeyed with sweet malt. Apple juice, pear and vanilla. Some mango & apricot too. There is a green freshness too – slightly grassy with freshly sawn wood. Mild pot still spice in the background along with a toffee note.

In the mouth: A thinnish mouthfeel on arrival but gain fairly sweet with honey, malt, vanilla and orchard fruit. Some lemon before the spice builds – light pepper with grassy, green raw malt. The finish is of medium length and full of warming spice and a hint of lime marmalade.

Color: Caramel again but a touch darker than the Copper Pot.

On the nose: Slightly floral but very fruity – orchard fruit abundant, apples, a hint of peach and loads of stewed pears. Vanilla, white grape too. Some spice builds with cinnamon and nutmeg along with some caramel sweetness.

In the mouth: Quite a chocolate note on arrival then stone fruit. Plum, peach and then the white grape again. Some citrus zest with mild baking spice, oak tannins and a touch of cask char.
The finish is fairly short but the chocolate note remains along with some cinnamon.

On the nose: Quite a green and spicy nose. Green apples, lemon thyme, green wood and pot still spice. Honey sweetness comes through in time with malt and a hint of mint. Light milk chocolate notes with new leather too.

In the mouth: A nice arrival even at full strength. Plenty of sweetness – barley sugar, butterscotch and maple syrup. Then the orchard fruit again – apple, peach and apricot. Marzipan which leads to oak driven spice mixed with milk chocolate, pecans and mint. The finish is pleasingly long with caramel, chocolate and warming spice. 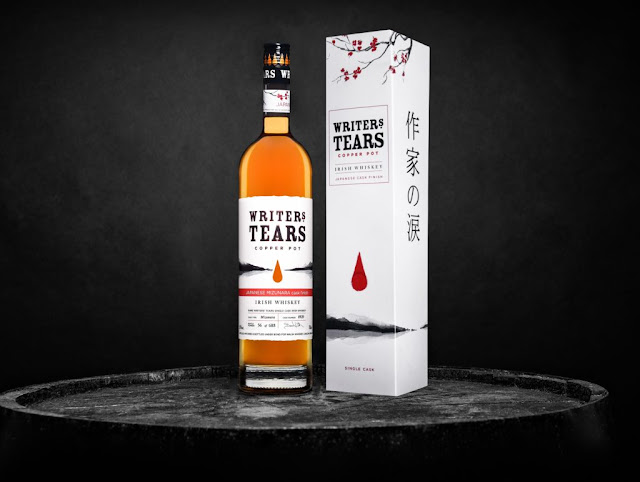 On the nose: A definite sandalwood note on the nose along with pine, white chocolate and caramel. Underneath this are flashes of apple and pear and eventually some citrus zest. The nose does feel rather tight and closed though. Water does improve things making the nose more overtly fruity with dry woody spice and citrus oils.

In the mouth: Quite hot & spicy on arrival. Honey, vanilla, raw malt and caramac bar. There is a green herbal quality to this with mixed lemon and lime peels too. But that spice heat and prickle dominates the palate. Water does make things a little better on arrival but again that spice heat dominates everything. The finish is medium length at full strength with a mouthwash alcohol numbing effect and a lingering tartness from the citrus rinds.

A mixed bag with definite peaks and troughs from the folk at Walsh Whiskey but the stars of the show being the core range expressions rather than the Travel Retail exclusive.

The Copper Pot is a great value blend that offers excellent value for money, is well balanced and offers enough to keep you returning to the bottle. I feel that if this was delivered at 46% it would be a 7 but I understand this may raise the price a little although I'd happily pay a little extra for more flavour and that I think the extra abv would bring to the table. That being said for the price there is little to argue over.

The Double Oak is another solid expression. It has a bit more spice than the Copper Pot and for me it feels like the spirit has been dominated by the Cognac casks a little. So while engaging I'm not sure it is worth the extra £10-15 over the Copper Pot.

On to the 2019 Cask Strength, which I have to say is just simply delicious stuff and one of those occasions where the palate is better than the nose. This would be batting on a 9 if it was priced around the same as Redbreast 12 year old cask strength at about £85. Still a belting whisky though.

Finally, the Mizunara Cask. Sadly much like Ireland's Rugby World Cup tournament this whiskey just didn't really work for me. I really struggled to get the chocolate, coconut and fruitiness that you expect to get from Mizunara Oak. Instead this just became a spice driven cask fest that dominated the spirit and detracted from the whole experience. This has been flirting with a 3, so possibly I'm mellowing in my old age. Yet again my dalliances with Travel Retail only result in disappointment.