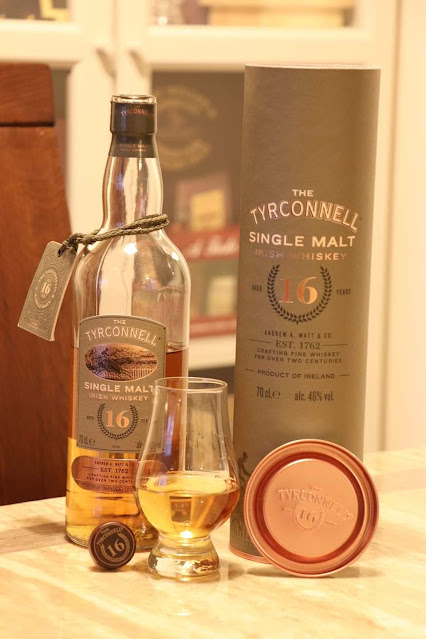 So you are all aware of my dirty little secret by now, dear Malt readers...I HATE IRISH WHISKEY!— or so I'm told, on a more and more frequent basis. Sadly, I was born on the wrong side of the Irish Sea, cut adrift from the real Mecca of whisky production that we all know is...England, because the Lord of Tweed and Adam ‘The Bimber’ Wells keep telling us!

As essentially Malt's only Irish correspondent to post on a regular basis, and with the rest of the team’s reluctance—no; make that unwillingness—to review anything Irish, I find myself in the unenviable position of spending a lot of my time with whiskey of Irish origin. It's a real-life Greek tragedy!

Of course, I'm hamming things up a little there in my opening salvo. I definitely don't hate Irish whiskey, but I also don't love it quite as much as others in the community. In fact, the vast majority of my home collection of open bottles hails from Scotland, or farther afield. That being said, I am gathering up quite the Irish sample collection to bring further Irish reviews to Malt.

I've said it before, and I'll probably keep saying it for the foreseeable future, but there is a lot of whiskey in Ireland that just doesn't offer value in my eyes. Often, it is a rehash of Bushmills, Cooley and Midleton stock with often scarily-inflated prices. Take, for example, The Dublin Liberties Keeper’s Coin. A 16-year-old Bushmills bottled at 46% and matured in bourbon casks but finished in PX sherry casks, it’s yours for only £235 on Master of Malt ,or €320 for the (un)lucky folk who buy it off Dublin's Celtic Whiskey Shop. Surprisingly, even with the offer of free delivery, Master of Malt are yet to sell out of this fine bargain.

Really, though, what is going on with pricing like that? It’s frankly ridiculous, and anyone who spends that on a 16-year-old Bushmills needs their head examined. This comes into sharper relief when you consider that I bought a cask strength 16-year-old Bushmills from the SMWS, who are also having a pricing crisis of their own, for around £115.

While others may not have the gall to charge quite as liberally as the Dublin Liberties for sourced whiskey, it is hard to deny that a lot of Irish whiskey brands do not necessarily offer great value. Until the industry is well along in years, the startup costs of the new distilleries have been covered, and the hype surrounding Irish whiskey in general dies down, this is very much likely to still prove true.

One Irish brand around which there is very little hype is The Tyrconell, once of Cooley ownership, but since 2011, under the stewardship of Beam Suntory. Really, since the takeover, it has seemed that precious little was being done with the Tyrconnell brand by Beam Suntory. In fact, they even discontinued the 10-year-old fortified wine series, leaving only the NAS Tyrconnell to fly the brand’s flag. I reviewed the standard NAS Tyrconell here on Malt nearly two years ago and deemed it to be perfectly drinkable, if a little bland.

Then, as of 2017, Beam Suntory released age-stated limited editions of The Tyrconnell. 2017 saw the release of a 16-year-old expression fully matured in ex-bourbon casks and bottled at 46% ABV, which Master of Malt sold for £79.

All these whiskies are double-distilled. It is unclear if colouring or chill filtration was used.

I bought these samples off Val Voit, the founder of the Waterford Whiskey Society and all-around good chap, for €38. 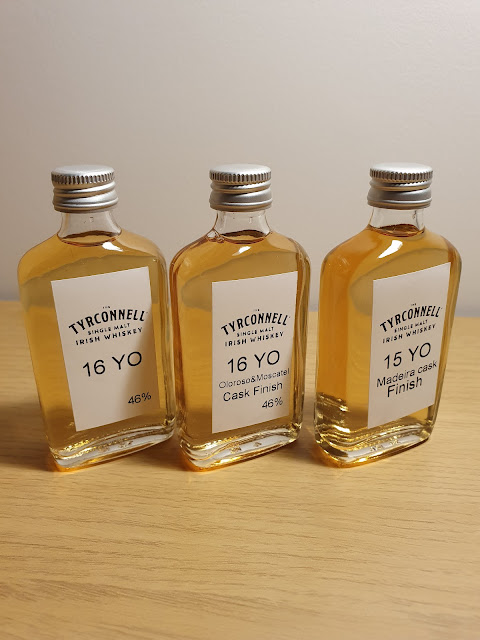 In the mouth: A nice mouthfeel to this with plenty of that tropical fruit on the palate. Simple syrup, pineapple, mango, vanilla cream and sweet malt. There is a gentle spice spike mid palate with a little pepper, some cinnamon and toasted oak. The finish is spice-rich, warming and actually pretty long. 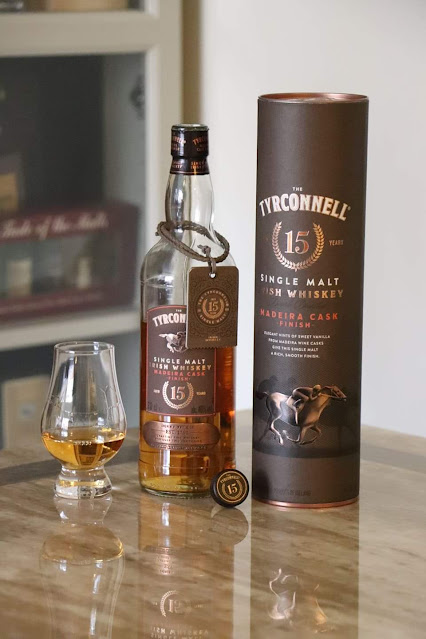 On the nose: Again, a very fruity and sweet nose. Apples, pineapple, ripe peach and hints of banana. Caramel and vanilla, toasted almonds and waffle batter. Some milk chocolate too. A slight grassiness before subdued spice and mellow oak.

In the mouth: Another pleasant mouthfeel at arrival. A pleasing maltiness with caramel rice pudding topped with pineapple and banana. Roasted nuts and milk chocolate. Mid-palate spice builds nicely with clove, cinnamon and oak tannins. The finish again is of good length with brown sugar, oak and spice. 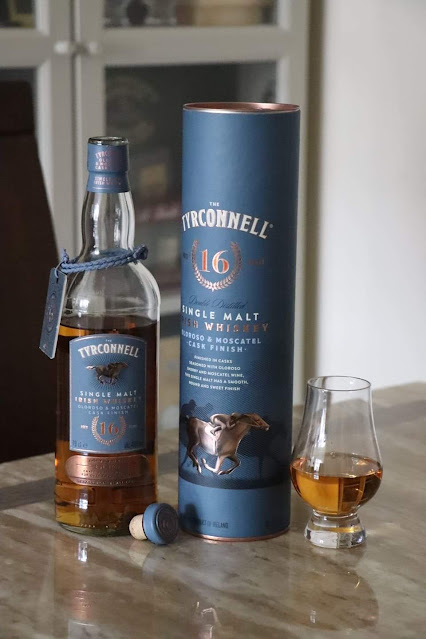 On the nose: This is a very sweet nose – like a candy shop (cue the “Fiddy” Cent). Lush vanilla and nougat. Honeycomb, apple, peach, plum and citrus too. A dry champagne note with hazelnuts and dark chocolate and some golden sultanas.

In the mouth: Quite a bit of spice and heat on arrival from both the alcohol and oak. This spice actually dominates proceedings, sadly. As such, the sweet, fragrant nose doesn't translate to the palate at all. There is some honey sweetness swiftly followed by, surprisingly, grapefruit and key limes and some dark chocolate, but all quickly overpowered by that spice heat. The finish is hot and dry.

The 2017 release 16-year-old is a lovely thing, simple, straightforward and well-executed, and shows that you don't need fancy fortified wine finishes to deliver a really tasty whiskey. I'd happily buy a bottle of this if it was still available.

The 2018 release 15 year old Madeira Finish was another really, really nice whiskey and highlighted a finish done right. The Madeira cask integrates well with the bourbon-matured spirit to add a different dimension to the 16-year-old. Well-balanced and flavoursome. Again, another bottle for which I'd hand over hard cash.

The 2019 release, then, was really such a disappointment after such a good start. The nose really is a wonderful thing, but it all fell apart in the mouth, with aggressive spiciness dominating and really overpowering the base spirit. Perhaps a finish too far? Or perhaps finishing casks unable to mask poor bourbon casks?