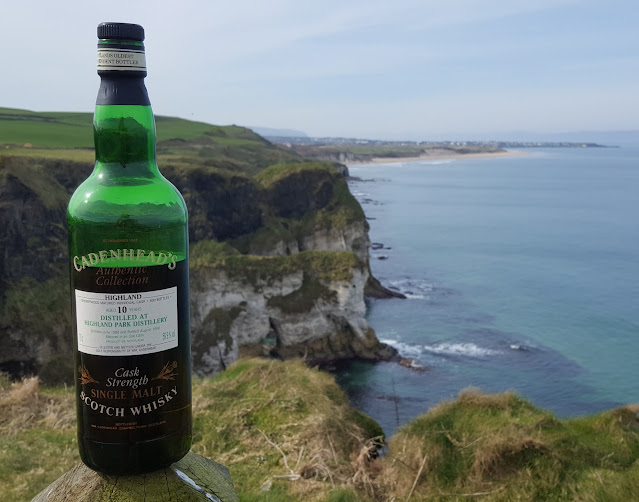 Highland Park. It's a brand that has come in for some criticism here at Malt Towers for a variety of reasons. First and foremost is the fact that quality no longer seems to be paramount in the eyes of Highland Parks owners, The Edrington Group.

The core line of Highland Park that consisted of the 12, 15 and 18 year old age statements was generally held in high regard by enthusiasts. While the 12 and 18 remain (in the new hideously designed bottles) the 15 year old has been dropped and was replaced initially by the underwhelming Dark Origins (a no-age-statement whisky high on sherry content) which has subsequently been replaced by the even more anodyne Valkyrie (a no-age-statement whisky high on mediocrity). Then there is the duty-free Warrior Series bearing the names of mighty Nordic men of war and little else. This move to NAS whiskies is something that Edrington have form with. Just look at their tinkering with Macallan and the 1824 series; gone are the age descriptors, replaced by colours! The Fine Oak range too has been received in a lukewarm manner. Macallan is not what it once was. Highland Park it would seem is following suit.

The lack of an age statement has obvious benefits for the distillery... not so much for the consumer. There is a considerable lack of detail on the likes of the Full Volume, Dragon Legend (yes, really, that is the name!) and the newly released Magnus. So while the distillery will tell you that a lack of an age statement allows flexibility in the use of stock, for us as enthusiasts it means in many cases we are asked to pay premium prices for decidedly un-premium contents. While it is true that an age statement in and of itself is no guarantee of quality whatsoever, (link to the Quiet Man 12) it does at least give you some information as to why you are parting with your hard-earned cash.

Personally I also really dislike the current rebranding. Highland Park has really gone up their Viking backsides with all this guff about Norse gods and warriors and dragons. I'm really not that interested in reading about Norse mythology off the back of a whisky bottle, I tend to find libraries much better for that type of education.

So while the official bottlings from Highland Park slip in the distinctly profit chasing money pit of mediocrity it would seem to be at present that the Independent Bottling sector is a more suitable place to find a good Highland Park. Certainly, there are plenty coming to market at present although you are more than likely not going to find the Highland Park name on the label. Rather if it bears a title such as 'A Distillery on Orkney' you can be pretty sure where it's from. 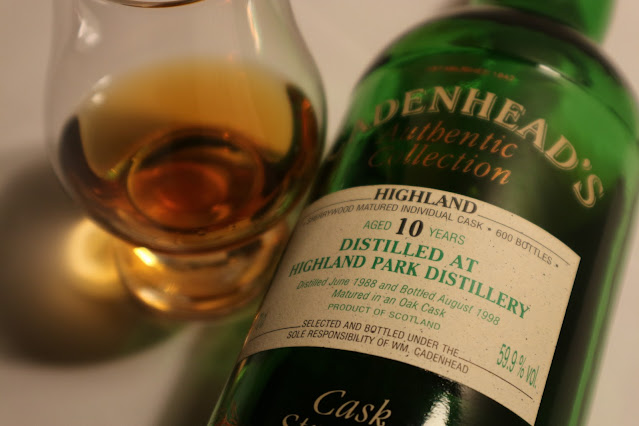 The expression on review here today has been bottled by the good folk from W.M.Cadenheads. Distilled in June 1988 and bottled in August 1998, making it 10 years old, this particular drop has spent its entire lifespan maturing in a single sherry cask that produced 600 bottles. Bottled at a healthy 59.9% as part of the Cadenhead's Cask Strength Authentic Collection. I bought this bottle at Fairleys in Coleraine for £55 a couple of years ago. Don't bother looking for another in Fairleys as the last two bottles sold very recently for a bargain £80 a pop.

This is a dram that is a real cacophony of aromas and flavours but ultimately it is balanced too. The nose and palate give me the impression of a Pedro Ximenez cask being used for the maturation, and while it has evidently been an active cask, the sherry does not overpower the gentle coastal aspect of the Highland Park spirit. It is a vibrant and engaging dram and I am really kicking myself that I personally didn't buy the other two bottles when I had the chance... but then again I'm glad that someone else will get to try this. It just highlights what Highland Park could be capable of producing. I just love this dram and I'm eeking out the rest of the bottle as best I can. Who says I'm hard to please?