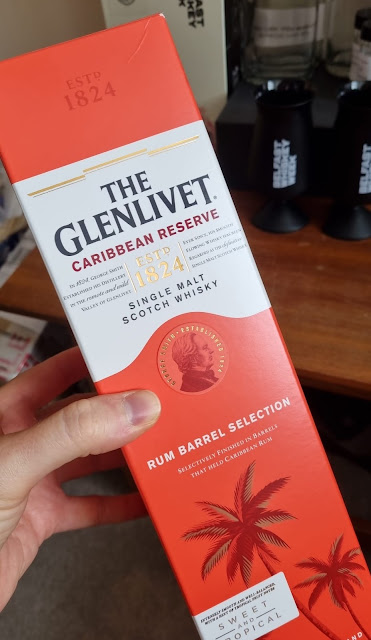 Recently I was sent a DM on Instagram with a link to a post that basically bemoaned the idea of critique. The basic gist of the post was as follows: "You know these brands that WE are supporting by paying our hard earned cash for their products, well they have worked really hard to create the expression you've just bought....so even if it's rubbish, well spare a thought for those poor multinational's that have worked tirelessly to produce mediocrity because you might hurt someone's feelings at that company if you say something negative!"
Yes the tide of hashtag 'EVERYTHINGISAWESOME' in whisky is certainly on the rise as more and more so called influencers or reviewers fear biting the hand that feeds them. In fact in the aforementioned post the 'reviewer' even describes himself as a 'Brand Ambassador', albeit an unofficial one with no actual ties to any companies or producers.
The thing is these companies don't need unofficial Brand Ambassadors, they have plenty of official ones to peddle the marketing story that they want to feed their target markets.
What ever happened to the idea that the 'Customer is King'? Self recommendation after all is no praise.
Put bluntly....if I have bought a product I will not sugar coat my opinion on it for fear of offending the producer, especially so if that opinion isn't very high. Even if I've been gifted a sample or a bottle from the industry I don't hold back from giving my tuppence worth.....which is why I rarely get free stuff anymore and I'm fine with that.
As a reviewer you do not need to be industry friendly, neither do you need to rely on the industry for samples - be an active part of the community, share with others and others will share with you.
I realise my opinion is neither sought, nor valued by the vast majority of people but if you run a blog or have a social media presence that people buy into then I feel it is vital that you give them honest, impartial opinions even if they don't always go down well rather than just telling people that everything on a whisky shelf be it in a supermarket, an independent store or online, is wonderful. You know people will actually part cash on the basis of what you say.
Looking further into the post that kicked off this rant it was very evident that the person running the site was running a business - tastings, merchandise etc rather than actually offering insightful reviews.
It was this 'Everything is Awesome' mentality that started me on the road to reviews in the first place after buying the horrendous Bowmore Black Rock on the basis of reviewers who I had put stock into at that particular time. It was only after trying the abomination from Bowmore that I realised that there were those who would put free samples before offering their truly honest opinions.
Rant over...almost. This review I'm back in the dreaded supermarket aisles looking to see if there are any drops out there really worth spending your money on. All six of these were bought for the bottle share club I'm in and for the craic after I give my thoughts I'll post the aggregate scores out of 10 the club gave them.
If you are a person who fears critique in the posts you read and you want 'Everything to be Awesome' I suggest you turn away now.
Glenlivet Caribbean Reserve Single Malt 40% abv (Sainsburys £36)
This is the one where Glenlivet throw young malt into an ex-Bacardi cask and hope for the best.
Colour: Warm Gold
Nose: Green apples, soft peach and honey. Vanilla & fabric softener along with some toffee. There is a slight acetone overtone finally - kind of like un-aged Bacardi!
Palate: Mouthfeel is decent considering its 40% - flavour wise, there's not much going on. The Glenlivet green apples are ever present along with some butterscotch and vanilla. Things go a little tart and bitter mid palate with a mild sprinkling of pepper.
Finish: Alcohol and lemon peel on the thankfully short finish. 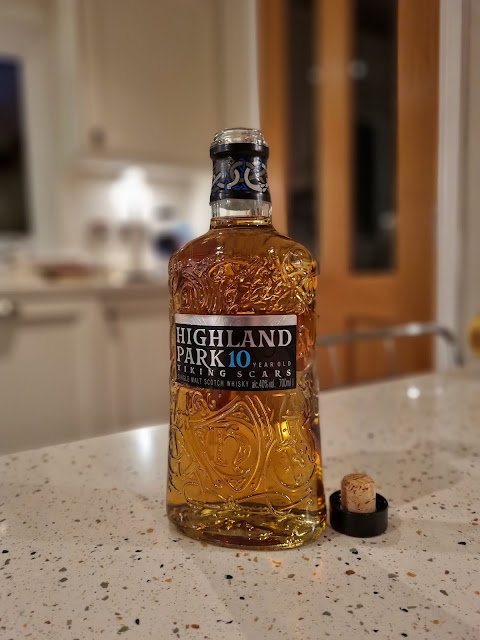 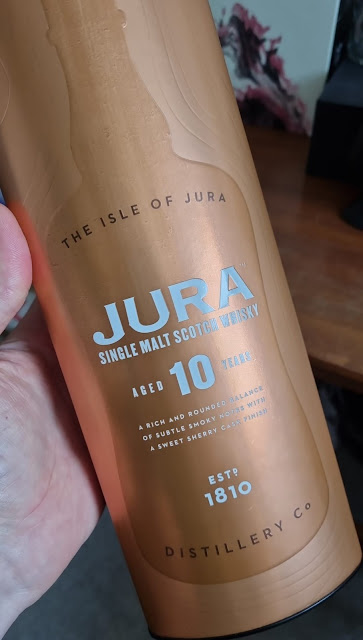 Jura 10 year old Single Malt - 40% abv (Sainsburys £38)
Yes, I know what you are thinking.....I obviously don't like my friends....but maybe this will be a blessing in disguise?
Colour: Dull Copper
Nose: First nosing highlights a troubling rubbery and metallic element. Envelope glue too. Subsequent nosing brings out a hint of smoke, rubbed brass, vanilla, caramel and stewed apples....maybe a hint of orange peel. But those first notes that are slightly off linger throughout.
Palate: A pretty thin mouthfeel - weak black tea and an artificial saccharine sweetness. Rubber again with a hint of chilli flakes and clove before leaning towards earthiness in a rather dry, bitter, non umami way.
Finish: Fleeting thankfully but with those rubber & metallic off notes. 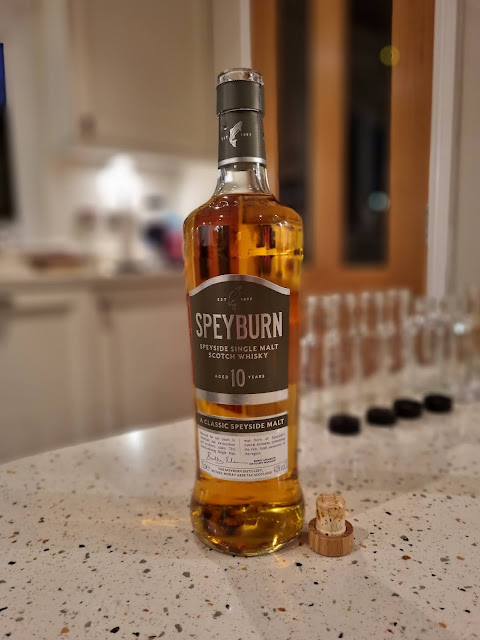 Speyburn 10 year old Single Malt - 40% abv (Sainsburys £32)
A classic Speysider matured in bourbon and sherry casks, filtered within an inch of its life and bottled at the mandatory 40% abv to extinguish all life from it.
Colour: Caramel Gold
Nose: Quite bright and sweet. Vanilla, honey, barley sugar along with ripe apples and pears. A vague note of dried fruit and yeast.
Palate: Much like the nose - honeyed malt, bread, vanilla and apples with some peppery spice.
Finish: Very short with some pepper and honey. 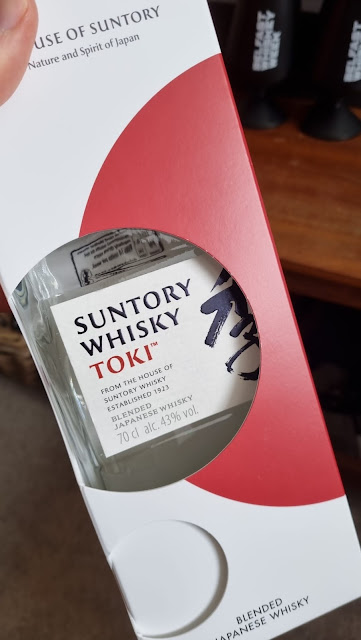 Suntory Toki Blend - 40% abv (Sainsburys £35)
Bought only to prove that the Japanese whisky we get sent now is far from great.
Colour: Who cares?
Nose: Meh
Palate: Green vomit face emoji
Finish: Down the sink after it ruined the ginger ale I poured it in 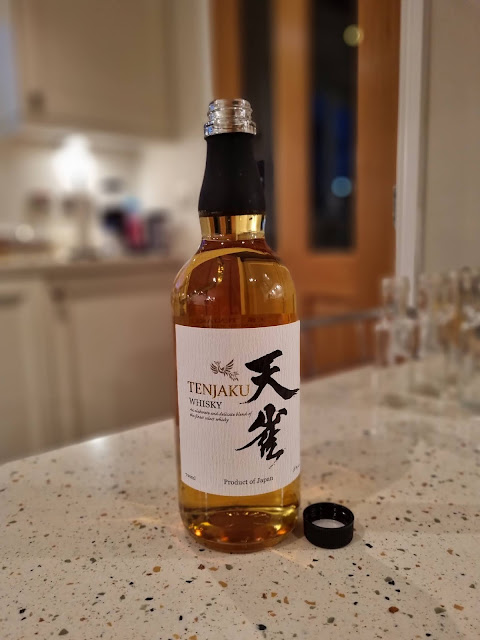 Tenjaku Blend - 40% (Sainsburys £28)
Very little to report on this other that it's around 4 years old, matured in bourbon casks and is apparently fully distilled in Japan - no scotch in disguise in this bottle!
Colour: Light Gold
Nose: Sweet with a hint of cask char. Floral grain, butterscotch, vanilla, pear, oak and some raw spirit.
Palate: Decent mouthfeel - syrupy sweet with honey, toasted cereals, tinned pears, cask char and the a dry oakiness.
Finish: Short with a bit of wood spice but little else.
Overall:  So these were tasted over two evenings and as per usual all the other lads in the Causeway & Inishowen Bottle Share got theirs blind. I will say that the aggregate score don't necessarily represent how I feel personally as there are one or two mavericks in the club who constantly surprise with their scores.....but that's the fun of it (Oh and we allow half marks in our scoring just for the craic).
I suppose to give a sweeping generalisation on all of these if I was asked if I would buy any of them again then the answer is NO!
Let's break them down.
The Glenlivet started off okay, the nose was okay and typical Glenlivet but the palate let it down massively. The overarching opinion was that it disappeared as soon as it arrived and mainly tasted of youthful spirit. Considering the price there is basically nothing to recommend.
The Highland Park has benefitted from some magnanimous scoring but only because it really was the best of the 6 drams and by quite a margin. (I scored it a 5 in case you were wondering). For the asking price at Asda there is little to complain about but I wouldn't want to pay more than that for it.
Yes....I subjected the guys to a Jura. Harsh? Maybe....but there has been a beneficial outcome.....they all know not to buy it ever again......ever. Surprisingly not the lowest scoring dram which tells you how bad the others must have been.
The Speyburn 10 is essentially just a bland whisky. If you want a generic description of what a Speyside single malt whisky smells and tastes like this would be it. There is little to engage with, drinkable but not really enjoyable.
The Suntory Toki.....you know that old adage, 'if you haven't anything good to say, don't say anything!'.....so I'll leave it there.
Actually I can't.....this stuff made Proper Twelve seem acceptable. Nail polish remover has more redeemable attributes than this...as in it's useful for something! The Toki even ruined mixers. AVOID!!!
The Tenjaku was a bit of a surprise in that not only could you sip it and not feel violently ill but it didn't ruin your mixers either. But at the price there are still many other whiskies I'd recommend over it that offer much, much more in terms of flavour.
Alas the supermarket is still a mire of nightmares rather than a field of dreams. The quest continues.
Aggregate Scores:
Glenlivet Caribbean Reserve - 1.5 out of 10
Highland Park 10 year old     - 6.5 out of 10
Jura 10 year old                       - 2.5 out of 10
Speyburn 10 year old              - 3 out of 10
Suntory Toki                            - 1.25 out of 10
Tenjaku                                     - 4.5 out of 10
Labels: 10 year old Blend Caribbean Reserve Glenlivet Highland Park Japanese Jura Scotch Single Malt Speyburn Suntory Tenjaku Toki