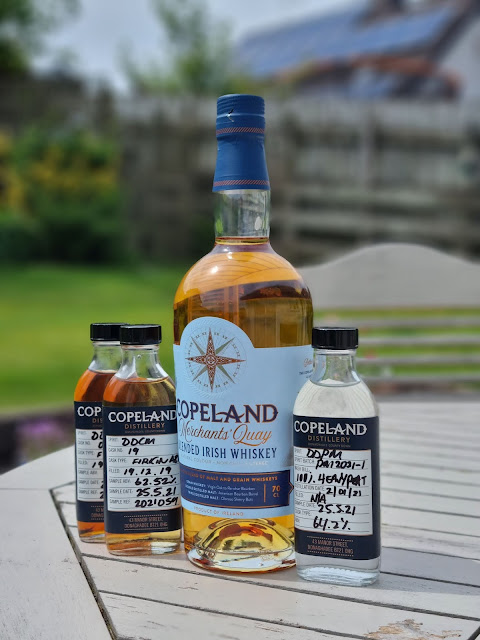 While still producing gin and also rum the lads at Copeland have been busy distilling single malt and pot still spirit too and plan to release matured spirit in 2024. In the meantime they have also turned their hands to blending sourced spirit and have released the Copeland Merchant's Quay blend off the back of that practice.

In full disclosure I was sent this bottle for free, gratis, I made no payment.....clear? Clear! Let's move on then....The Merchant's Quay then is a blend of grain, double distilled malt and triple distilled malt matured in four different casks.....virgin oak, re-char bourbon, 1st fill bourbon and oloroso sherry. It's no age statement but the youngest component is the grain at just over 3 years. It's bottled at 40% abv and interestingly is both natural colour and non chill filtered! It can be picked up for around £32 a bottle. 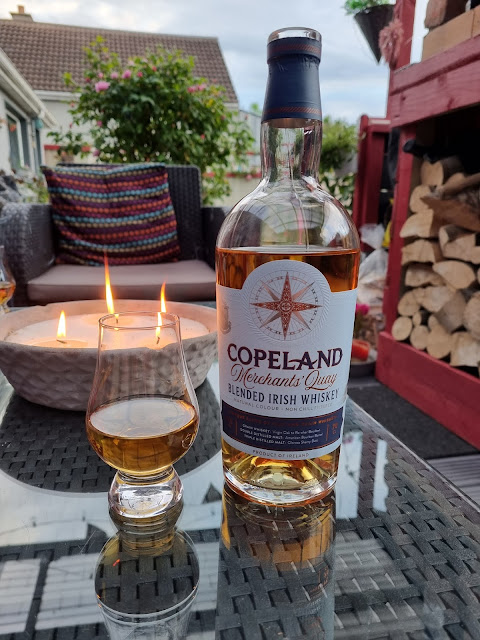 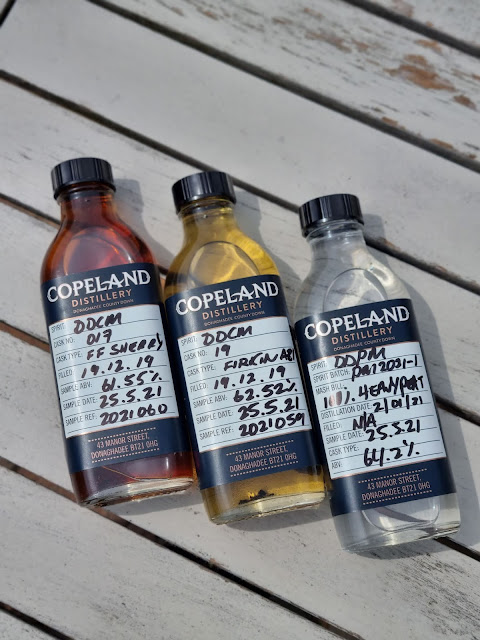 As well as sending me the Merchant's Quay the good lads at Copeland also sent some of their current works in progress. Two samples of double distilled chocolate malt and a sample of their heavily peated double distilled single malt.  I thought it would be remiss of me not to provide a few notes on these and let you see how their own distillate is progressing.
First up the is the double distilled chocolate malt, both of which have been maturing in firkins, bourbon and first fill sherry respectively.
DDCM Bourbon - 18 months old, 62.52% abv
Colour: Gold
Nose: Unsurprisingly there's a little alcohol kick at first. Fresh and grassy. Very creamy. Ripe pear, peach, digestive biscuit, beeswax and mead. Butterscotch sauce and black peppercorns. Water brings out ginger, milk chocolate and more honey notes.
Palate: Amazingly at the abv there is no alcohol harshness. A lovely dense, oily mouthfeel. Again really creamy. Clotted cream and caramel. Cereal to the fore with lots of malt. Pepper spice leads to pencil shavings and cocoa powder. Water makes things a little greener and herbal with citrus zest apparent too.
Finish: Actually pretty decent for the age - pepper spice lingers with black tea and herbal tartness. 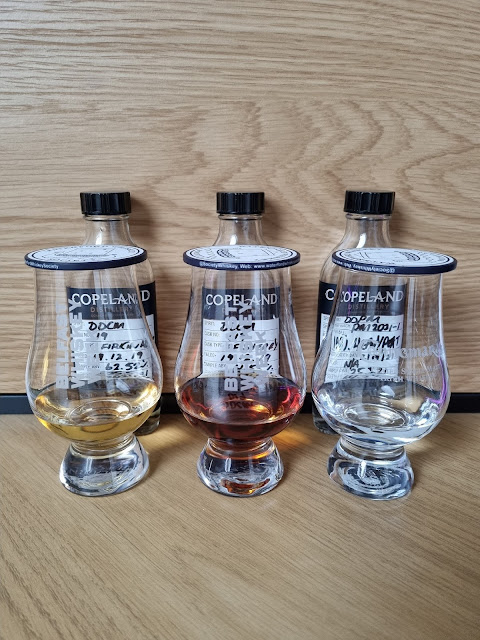 Let's start with the Merchant's Quay. I often get worried when a new Irish blend is released, so many lacklustre and highly priced pretenders have been brought to market (ahem Red Earl for example). Thankfully I was pleasantly surprised here. A solid, well crafted blend worthy of its £32 fee. Very much decent value at the price.

While I'm glad to be positive about the Merchant's Quay it was the examples of Copeland's own distillates that excited me more - and I'm happy to report they were all good.
The bourbon matured spirit stood out a bit more from the matured malts mainly because in the case of the sherry cask matured spirit, the cask was very much dominating - a sherry bomb through and through. The bourbon cask I believe let the distillate talk more being very fruity and biscuity. Water highlighted it's youth a little but for both being 18 months old they delivered bags of flavour. Thankfully I didn't pick up on any off notes either which bodes well.
The peated malt new make was excellent highlighting nice savoury barbecue and industrial notes alongside doughy bread and fruit. I can't wait to see what five years in a bourbon barrel does to this spirit.
Scores:
Merchant's Quay - 5 out of 10
Labels: Blend Copeland Merchants Quay Peated Single Malt