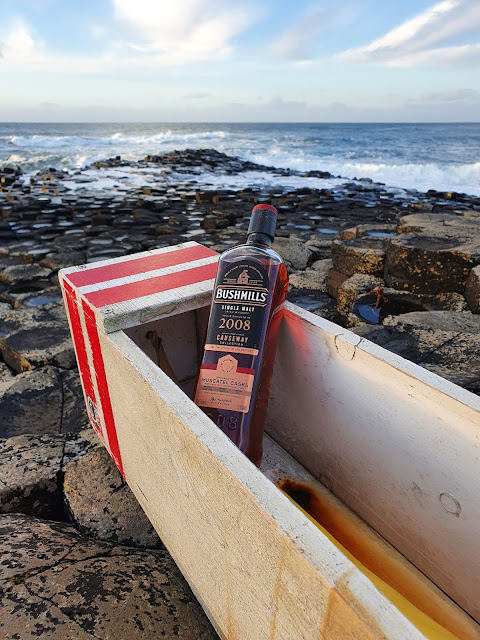 Yes I know I've already reviewed these on my Instagram page....you even get scores there! But the notes for that review came from the draft of this review....I just couldn't be bothered writing the whole piece back then.

Prior to the release of the Causeway Collection (of which the two reviewed here are Irish exclusives) you had to get cask strength Bushmills from the likes of the Scotch Malt Whisky Society and generally they would have been bourbon cask only. Or you had to be fortunate enough to attend one of Seamus Lowry's Bushmills tastings where you might have got to taste cask strength components of the 21 year old core expression.

Fans of Bushmills were decrying the fact that Midleton was pumping out cask strength editions of Jameson, Midleton and Redbreast and yet the slumbering beast of Bushmills was sticking firmly to 40% abv, colouring and chill filtration. The most excitement we got was the Steamship (spits on the ground) Collection and Red Bush!

The thing was we had all heard the whisperings of 29 year old cognac casks, old malaga casks, even whiskey 40 years and over. The gut feeling among enthusiasts was that in those warehouses behind Bushmills picturesque Pagoda were whi€skies that were going to be truly special....they just had to unleashed.

Then came news of the Causeway Collection and fever pitch was achieved in a near instant.

The two examples reviewed here are the 2008 Muscatel cask and 1995 Malaga cask expressions.

The Muscatel was distilled on 21/03/2008 and matured in a combination of bourbon and sherry casks before being re-casked on the 17/03/2016 and matured for another 4 years in Muscatel casks before bottling in late 2020. Bottled at 56.4% abv, non chill filtered and natural colour with an outturn on 1454 bottles. The price was €100/£95 and it was very sought after.

The Malaga was distilled on 22/11/1995 and matured in a combination of bourbon and sherry casks for 10 years before being re-casked into Malaga casks for a further 14 year maturation, finally being bottled late 2020. Bottled at 53.5% abv, non chill filtered and natural colour with an outturn of 2491 bottles. The price was €400/£385.

I bought both my bottles through Fairley's Wines in Coleraine.

Added to the review now is the La Maison Du Whisky 1992 Cognac Cask finish 28 year old. Distilled 09/04/1992 and matured in a combination of bourbon and sherry casks for 11 years this was then recasked on 19/12/2003 for a further maturation of approximately 17 years in ex-cognac casks before bottling on 10/04/2020. This is at natural cask strength of 46.7%, non chill filtered and natural colour with an outturn of 500 bottles.

This would have set you back €395 from La Maison du Whisky but I managed to grab a sample from my good friend Val (@whiskeyval).

On to the tasting notes! 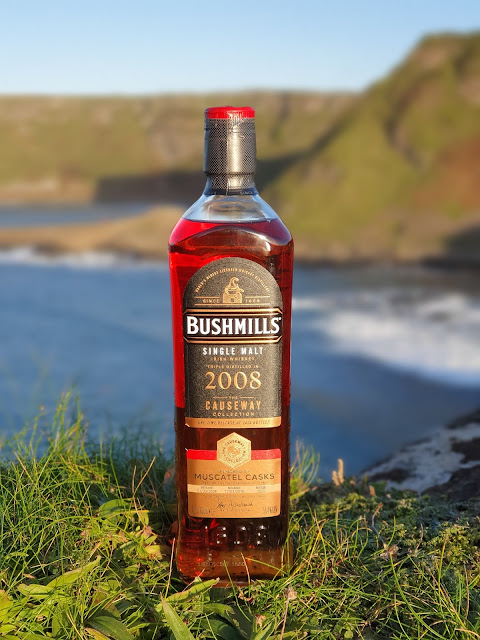 Palate: Again an alcohol prickle on first sip then muscovado sugar that leads to tropical fruit notes - peach, mango and pineapple cube sweets. Mid palate there is a swell of spice with white pepper and raw ginger that leads to coffee and chocolate as well as a dry nuttiness. With water - it's not recommended as it loses body and structure. The Bushmills water Achilles heel presents again. 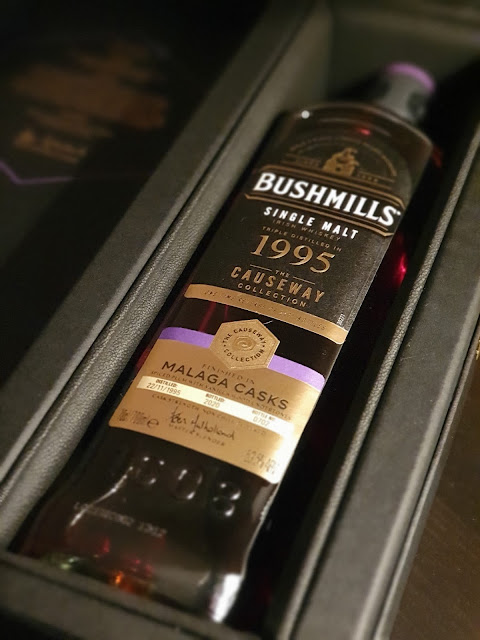 Palate: The palate follows the nose very well - liquid christmas pudding comes to mind. All those dark fruit notes of dates and raisins along with stem ginger, toasted hazelnuts and boozy sherry with sweet cake batter marry together. Frangipane also. This is underpinned by the Bushmills signature notes of bananas, peach and tropical fruit. Water brings out more syrupy sweetness from the Malaga casks along with spicy wood notes but again body wise the whiskey suffers.

Palate: Vibrant even after 28 years. Sweet malt then all the tropical notes from the nose with some banana thrown in for good measure. Stem ginger syrup, pink peppercorns and cardamom. Vanilla syrup infused mocha. The beeswax again makes an appearance.

We ask for cask strength Bushmills for years and then they open the floodgates! Two absolutely cracking drops from Bushmills and about flipping time I say! These really build on the 1608 400th Anniversary expression and the Acacia Wood Distillery exclusive expression.

Us whiskey nerds here in Ireland have known for years that Bushmills was a slumbering giant just waiting for someone to show it a bit of love and attention and reawaken it....and boy have Casa Cuervo done just that. With releases like this anyone starting to make malt whiskey in Ireland will have along way to go before they can compete with, never mind topple Bushmills.

These expressions also just highlight to me how well Bushmills spirit goes with fortified wine casks. Bushmills solely done in bourbon casks even at cask strength never really got my juices flowing but show them some sherry, madeira, port or malaga wine and it bursts into life.

While both expressions are excellent if I were to choose one then it has to be the 2008 Muscatel expression. For £100 (yes I know it's still a lot of dough) you get a lot of whiskey, it's a real treat. Complex, nuanced and full of flavour.

The trouble with the Malaga expression is not the whiskey itself but it's the price. £400 is a lot of wedge in anyone's language and yet I in know way regret splurging on it. Is it x4 times better than the Muscatel cask? No. But to be able to partake of the moment in time that is captured by this bottling it's worth the entry fee....I mean try buying a 25 year old cask strength Macallan these days...or a Glendronach...or even a Glenallachie! It's unlikely you'll get it at the same price as the Bushmills.

A final note on the LMDW 28 year old exclusive. It's easy after 28 years for an expression to become dominated by the wood but this was a great display of spirit, cask and time working in delightful harmony. The Cognac cask finish is so juicy and moreish. Even though it ain't cheap those who managed to bag a bottle have got themselves an absolutely cracking dram. It warms my heart to see expressions of such great quality finally being put out there by Bushmills.