It's been quite a while since I reviewed a Bushmills on the pages of Causeway Coast Whiskey Reviews. Over a year ago in fact. I have done four reviews of North Antrim's finest over on Malt so I thought it was about time Bushmills made a reappearance on this humble forum.


This time we are looking at one of the Steamship collection of single malts. Released to celebrate the 125th anniversary of the maiden voyage of the steamship SS Bushmills to America in the 1890's. The ship travelled to Philadelphia and as far as Yokohama returning with refilled casks that included rum, bourbon and fortified wines. These releases then reflect the influences of some of the countries visited by SS Bushmills.

So far Bushmills have released four Steamship collection expressions, all of which are no age statement whiskies and have been travel retail exclusives at least on initial release. The first was the Sherry Cask Reserve, matured in 1st fill Oloroso sherry butts and released in a one litre bottle at a price of £65 in GTR.

Second up was the Port Cask Reserve fully matured in ruby port pipes sourced from the Douro Valley in Portugal. Apparently the main component of this was 19 year old spirit which along with the maturation type led to it being released in a standard 700ml bottle and a rather high price of £100 at GTR.

Third was the #3 Char Bourbon cask we are looking at here and the fourth and most recent is the Rum Cask Reserve, matured in 1st fill Caribbean rum casks and also priced at £100 for a 700ml bottle in GTR.

Now I haven't been blown away with what I have tried so far. The sherry cask didn't offer anything new or improved over the excellent Black Bush or the 12 year old Distillery Reserve and was more expensive. The Port cask while being more successful in my mind to the Sherry Cask didn't wow me enough that I'd consider spending an extra £25 over the 16 year old. I haven't tried the Rum Reserve yet but have been told by quite a few (whose judgement I would trust) that it is also pretty underwhelming....and I'm not going to shell out £100 for the privilege of being disappointed.

On to the #3 Char Cask Reserve then. Like the rest a 'limited edition', but with no out-turn numbers its hard to put a finger on 'how' limited these really are. The fact that they are all now available for sale at the distillery would tell a story in and of itself. Matured in 1st fill #3 Char (that is charred for 35 seconds) Kentucky bourbon barrels, bottled at 40% abv, likely coloured and chill filtered this bottle will set you back £56.50 from the distillery and was bought for my bottle share group. 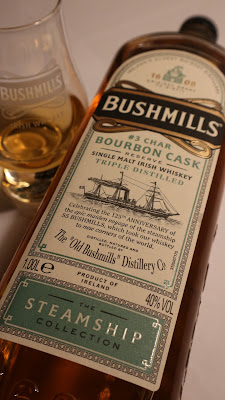 Very light and simple. Not much body. Honey, vanilla, banana, peach and a little oak spice.

Short with the cask char dominating and adding a bitter, herbal edge to proceedings.

Probably the most successful of the Steamship series I have tried but that still doesn't mean that I'd rush out to buy it again. In fact I think you'd be better served with the 10 year old single malt from the core range.

The nose is actually a lovely thing but the palate just doesn't quite deliver for me meaning its actually rather forgettable unfortunately. It does little to get me excited about the Steamship series and again reinforces that for each example I've tried there is already something in the core range that is not only tastier but cheaper.
Labels: Bushmills Irish NAS Single Malt Travel Retail Whiskey