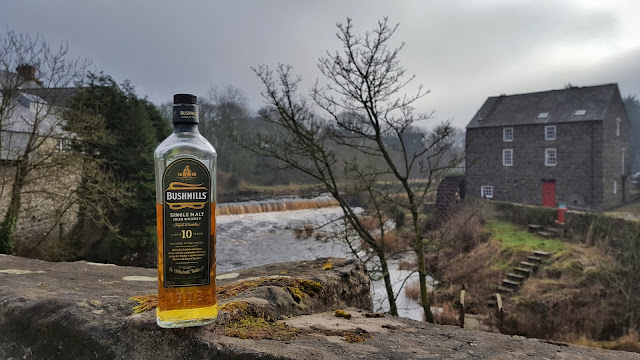 Bushmills 10 year old Single Malt is the introductory malt of the Bushmills Core line up. In 2007 it won the award for best Irish Single Malt Whiskey at the World Whisky Awards, in 2010 it was awarded a Gold medal at the San Francisco World Spirits competition and the venerable Jim Murray scored it 92.5 points in his 2013 Whisky Bible. High praise indeed!


As with all Bushmills whiskies it is triple distilled and this expression is called a 'two wood' whisky as it is matured in ex-bourbon casks and ex-oloroso sherry casks for at least 10 years. The final ratio of the vatting is 75% bourbon cask & 25% sherry cask. As with all Bushmills core line up it is bottled at 40% abv and is undoubtedly coloured.

Lets see how it fares in the glass!
﻿ 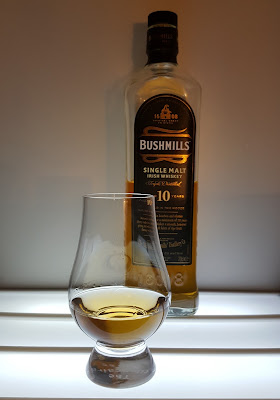 Quite a short finish, dry with a kick of tannins from the bourbon barrels and a little pepper spice.

I personally like this dram although I'm not sure I'd go so far as Jim Murray and his 92.5 points. Of all the Bushmills single malts this is easily the cleanest and zestiest. It is very approachable, easy to drink and has a reasonable degree of complexity. The nose and palate marry well and as it is relatively young it is still quite spirit driven so the distillery character of Bushmills shows through. I would recommend the 10 year old as a great summer dram or as an aperitif. The downside is still the bottling strength, the chill filtration and the colouring. I just wish Bushmills would move away from the chill filtration and colouring at least! A bottling strength of even 43% would help to elevate this dram even more. Water however kills this dram, so like a mogwai please keep this away from any water sources.
﻿