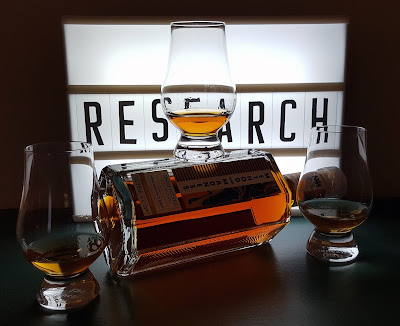 In Autumn 2015 a new micro-distillery was opened at Midleton just beside the existing distillery with the sole purpose of experimentation and innovation. It has a production capacity of around 400 casks a year. To quote the brand website 'Method & Madness is a whiskey brand hatched from the minds of the Masters and Apprentices of Midleton Distillery'. (It all sounds a bit Jedi versus Sith to me!)


There are quite a broad palate of people involved in this new venture, Master & Apprentice Blenders, Distillers, Coopers, Whiskey Scientists to name a few. So it is with genuine anticipation that I look forward to what they produce as Irish whiskey isn't quite so strictly curtailed as Scotch. For example, all Scotch whisky must be distilled, matured & bottle in Scotland and must only be matured in oak casks to be called Scotch. Irish whiskey has a bit more free reign as regards the choice of timber for maturation. As such in this first release from the Method & Madness range we see French Chestnut being used for maturation purposes.

The range consists of Single Grain, Single Pot-still & Single Malt whiskies. Single Malt? From Midleton? Well, not quite. When Irish Distillers agreed to sell Bushmills to Diageo part of the agreement included a package of Bushmills Single Malt being shipped to Midleton, hence the Single Malt aspect of the first Method & Madness releases.

All the whiskies reviewed are bottled at 46% (Yay), non-chill filtered (double yay) but there is no mention of natural colouring (oh well, as Meatloaf sang, 'Two out of three ain't bad). 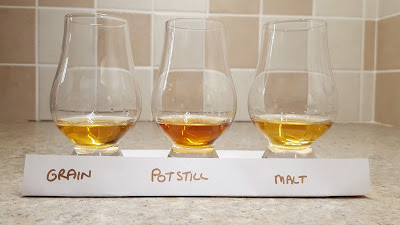 A no-age-statement whiskey initially matured in ex-bourbon barrels the light grain spirit has been finished for 12 months in virgin Spanish oak from Galicia, North West Spain.

The initial sweetness fades quickly leaving a tingling clove spiciness and a hint of peppermint.

A no-age-statement single pot-still whiskey matured in a combination of ex-oloroso sherry casks & ex-bourbon casks before a further finish in French Chestnut casks from the Isére region of France.

Deep amber with a dash of copper

The tannins and spices combine for a long, spicy & dry finish.

A Bushmills spirit distilled in 2001/02 and aged for 14 years. Initially aged in ex-bourbon barrels before being part aged in French Limousin Oak normally used for Cognac maturation.

Some floral notes with the usual Bushmills house style of peaches, apricots & bananas. A little oak & spice eventually works its way to the fore.

The counter play of sweet & spicy continues, eventually the spice wins leaving a pleasant warming of the back of the throat.

I really enjoyed all three of these expressions. I loved the clove spiciness of the Single Grain finished in the virgin oak. The Single Malt was a great example of what Bushmills could produce if they put their minds to it, vibrant, full of flavour & really interesting. Of the three though the Single Pot-still really stood out, so much so I bottle a bottle. It is sweet, spicy, aromatic and complex with the French Chestnut enhancing the vanilla, caramel & cocoa notes. 900 cases of this were bottled and I would urge anyone to seek this expression out.

Price wise I thought that the Single Grain & Pot-still were about on point but I feel the Single Malt is just a bit too pricey, especially with many outlets pricing it at nearly £70 for a 14 year old whiskey. However, the quality of all three liquids is undeniably good.

There is also a 31 Single Grain expression matured exclusively in just three refill bourbon barrels which allowed for around 100 bottles from each cask, bottled at cask strength between 51.3% & 52.5% abv. Price? Only around £1,250 per bottle. Now as I have not tasted this precious liquid I cannot state whether it warrants the price, however as I recently purchased a Dumbarton (closed distillery) 30 year old Single Grain whisky at cask strength and one of only 197 bottles at a lot less than a tenth of the price of this expression, I do wonder if Method & Madness can really justify a price such as that. My own shallow pockets will unlikely be able to answer that conundrum I'm afraid!