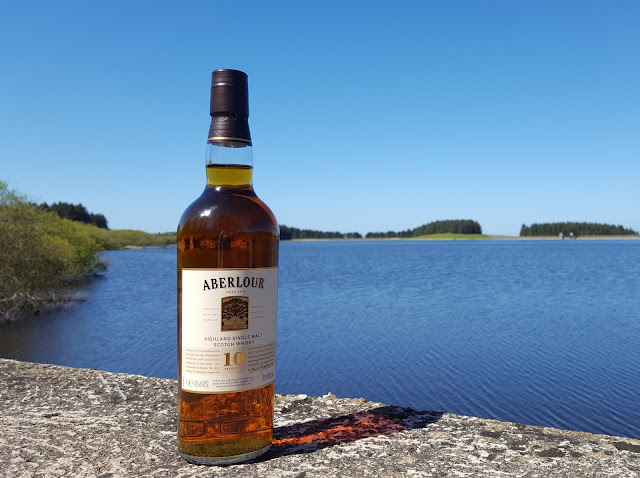 Okay, okay....I know.... I said I wouldn't be posting on here anymore but then a certain itch arose that needed scratching. You see I noticed that I had 87 posts on Causeway Whiskey. Two of those were an introduction to the page and a goodbye to the page meaning that in total I had 85 review pieces posted....and that's the rub....85 reviews didn't sit well with my OCD. So to rectify that I am going to get myself to 100 reviews and then call it a day again. Itch scratched.
Now these probably won't go on as long as previous reviews intro wise, rather they may be more a collection of tasting notes that I have either not previously bothered to type up or now feel that I want to put out there.
We start off then with Aberlour.
I must admit that I have a slight soft spot for Aberlour. The 10 year old was probably the second Scotch after Balvenie 12 Doublewood that really got me on the path to Scotch single malt exploration. Then of course came the A'bunadh which opened my eyes to reasonably priced cask strength sherry bombs (sadly the A'bunadh can no longer be considered reasonably priced at £85 a bottle for a NAS expression).
So in this review we'll cover three of core expressions the 10 year old, 12 year old and 16 year old although sadly the 10 year old is now discontinued.
All three are double cask matured, an unspecified ratio vatting of bourbon & sherry casks. All are bottled at 40% abv, have caramel colour added and benefit greatly from chill filtration (yes folks the whisky axis of evil returns and afflicts all three of these expressions).
Pricing....well I bought these all a while ago from my local Sainsburys...the 10 on offer for £25, the 12 on offer for £27 and the 16 at the then full price of £45. The 10 is still available from The Whisky Exchange albeit at the princely sum of £45, the 12 retails for anywhere between £35 & £40 but can often still be found on offer for sub £30. The 16 has jumped greatly....at anywhere between £68 to £75 per bottle.
Aberlour 10
Colour: Aberlour Gold
Nose: Quite fruit forward - ripe red apples & pears. Honey, vanilla alongside raisin, cinnamon and a hint of toffee.
Palate: A decent mouthfeel considering the abv. The arrival is soft with honey, vanilla and apple being the dominant flavours. Some darker sherry notes of raisin, dark chocolate, cinnamon and nutmeg. A slight pepper heat towards the end.
Finish: Restrained like the nose and palate - more honey and gentle woody spice. 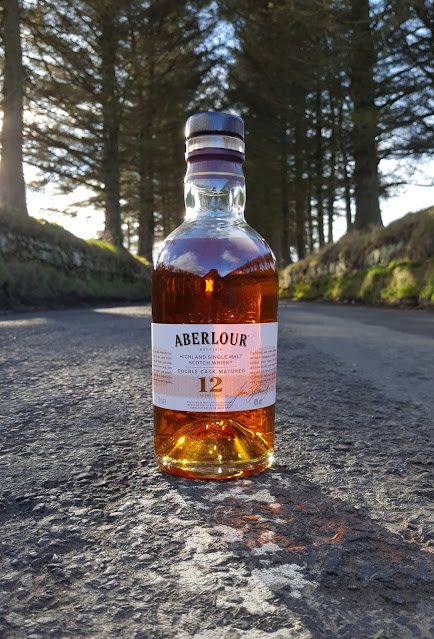 Aberlour 12
Colour: Aberlour Gold
Nose: Again a bit ripe red apple hit - orange peel with clove, heather honey, pineapple and mango along with honeydew melon. Lots of vanilla. Eventually there is a note of raisin, new leather and gentle oak.
Palate: Like the 10 the mouthfeel is good considering the axis of whisky evil in the way it's presented. Another soft and velvety arrival. The summer & tropical fruit from the nose is all here - apples, orange segments, pineapple and melon. A gentle clove & pepper spice runs through it all along with vanilla pods and a hint of milky coffee.
Finish: Relatively short with a warming spice but also a slightly astringent bitter note just to finish. 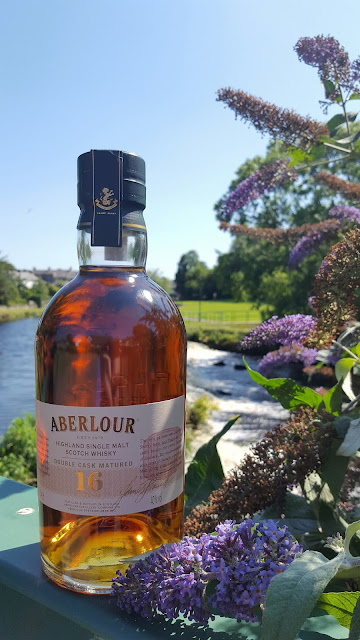 Aberlour 16
Colour: Aberlour Gold
Nose: Drier and darker than the previous two. Pencil shavings, oak spice, nutmeg and ground ginger. Toasted almonds and hazelnuts. Baked apples, brown sugar, tonka bean and sultanas. Water brings mead, clove and danish pastry.
Palate: Compared to the 10 & 12 this feels thinner in the mouth - muscovado sugar on arrival then a hit of fresh ginger and clove oil followed by coffee revels and that's yer lot. Water dials back the spice and brings a little more fruit - stewed apples and pears with cinnamon and sweet malt.
Finish: without water it's very short and dominated by spice and coffee, with water it's still short but the malt and fruit come through a little more.
Update 14/09/21
Whilst rummaging around in my samples collection I came across a 50ml sample of 12 year old Aberlour from the 80's courtesy of Belfast Whiskey Club. It seemed pertinent to throw my notes for that expression on here too....cos you know that all the whisky made in the good old days was superior to the modern muck we get now, right? 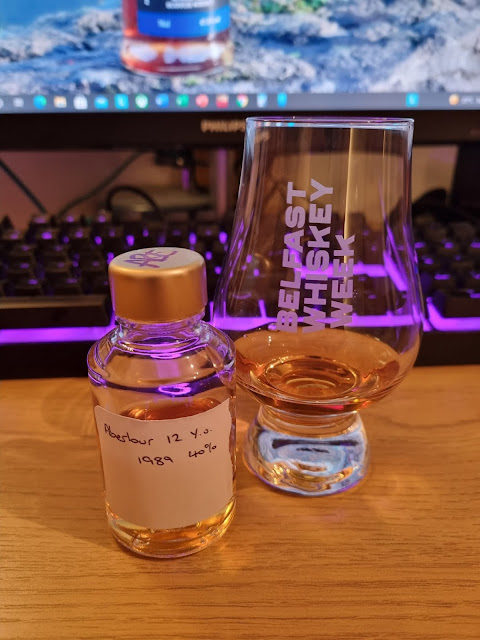 Aberlour 12 year old (1989 bottling)
Colour: Aberlour Gold
Nose: Denser and dustier compared to the more recent 12 year old. Wood polish, clove, nutmeg, violets and menthol. Coffee cake, candied orange and sherry.
Palate: A slightly thin mouthfeel and much more spice on arrival. Some demerara sugar sweetness before clove oil and pepper heat take over. Copper and then the dreaded soap - quite a lot soap too.
Finish: Now that I've picked up the soap it's very hard to dismiss. A pretty short finish - prickly spice and soap dominate.
Overall:
It's always fun to do a vertical and see that increased age and price doesn't always equate to a better product.
First off....one thing that struck me was how similar they all were in colour....good old e150 caramel colouring eh?!
The 10 year old was a really solid gateway whisky for those new to Scotch, especially for those out there that still think ALL Scotch is peated or smoky. At £25 in the good old days this was a no brainer to have in your whisky cabinet. Easy drinking and pretty well balanced there was little to complain about. Now, would I pay the £45 price tag that the Whisky Exchange is charging for a little piece of nostalgia? Simply put....No. There are to many options available at or below that asking price that make way more sense.....Bunnahabhain 12, Deanston 12, Kilkerran 12 to name just a few.
Onto the 12 year old. Still readily available and if on offer I'd suggest picking a bottle up, especially if you like tropical fruitbomb style drams. Well constructed and balanced it's a solid dram with just enough going on to keep your interest.
Finally the 16 year old. Not for me I'm afraid. Even at £45 I wasn't a fan and there is just no way on earth I'm paying £75 a bottle for this unless it has changed drastically over the last few years. The nose promises much but the palate is a real let down....very little flavour development and too much wood influence.
Really finally I conclude with the 1989 12 year old bottling. Talk about peaks and troughs. The nose was really good. Much woodier and dense than the more modern fruity style. It was really inviting and served to pique interest in the palate....which is where things came to a shuddering halt. The mouthfeel was poor and the notes failed to live up to what the nose offered. Then came the soap. I mean I'm personally not that prone to picking up on soapy notes in whisky, Glenfiddich Fire & Cane is the only other expression where soap really stood out, but it's impossible to ignore in this Aberlour sadly. Thankfully this proves that not everything from the 80's or beyond was awesome. Even back then distilleries had off days.
Scores:
Aberlour 10 - 5 out of 10
Aberlour 12 - 6 out of 10
Aberlour 16 - 4 out of 10
Aberlour 12 (1989) - 2 out of 10
Labels: 10 year old 12 year old 16 Year Old Aberlour Scotch Single Malt