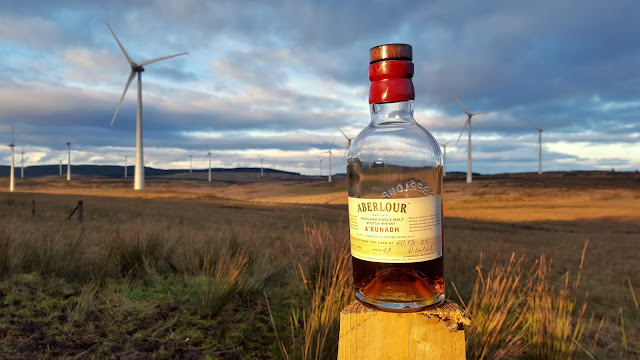 For the next couple of reviews we are looking at whiskies lovingly monikered 'Sherry Bombs' and we start with Aberlours' A'bunadh, a whisky that has gathered a bit of a cult following over the years since its inception around twenty years ago back in 1997.


I first tried the A'bunadh while in Edinburgh in 2012 and had a dram of it along with my haggis, neeps and tatties. It was a dram I'd heard a lot about and was eager to try and first impressions were good....I actually couldn't believe I was drinking something that was over the 60% abv mark but didn't blow your head off.

So what's with the 'Sherry bomb' tag? This refers to whiskies fully matured in casks that previously held sherry of some description, with oloroso and pedro ximenez generally being the favourites of the whisky industry. This means that you end up imparting sweetness, spice and nuttiness to the final characteristics of you whisky...in theory. If you don't have a robust enough spirit it can all get lost under the weight of the sherry and end up being a bit one dimensional....in fact it would just have been cheaper to buy a bottle of sherry and be done with it. A good sherry matured whisky should be balanced. The sherry notes should not over power the distillate and the distillery character.

Sherry cask finishing is very popular today, think the Balvenie 12 Year Old Doublewood, as opposed to full sherry maturation. The reason? The major reason is down to cost. Sherry casks are time consuming to make and expensive nowadays. Prior to 1986 sherry was shipped in new casks and bottled at port. The motion of the sea mean't that the sherry sloshed around in these casks and the wood absorbed a lot of the contents. Once emptied in port, it was cheaper to sell these casks to the whisky industry than ship them back to be refilled.

Post 1986, sherry is bottled in Spain and so the wide availability of transport casks fell off a cliff. This means that distilleries now order bespoke barrels. By the time trees are felled, sawn, coopered and seasoned with sherry, between 2 to 5 years can easily have elapsed. Hence it is easy to see why a sherry casks can cost upwards of £800 per barrel...and of course that cost is passed on to us, the consumer, and is also a reason why fully sherry matured whiskies can attract a bit of a premium over those with just a finish.

The A'bunadh here is Aberlours' sherry bomb and as stated earlier it is a bit of a hit amongst the whisky community as it is seen to be good value for money and generally of consistently good quality. For instance, I bought this bottle in Tesco for £41 back when they occasionally stocked interesting whiskies. Prices have risen a little though and a bottle may set you back around £55....however, there are murmurings that significant prices rises are to be expected, maybe even getting near the £80 mark.

The A'bunadh then is a no-age-statement vatting of many barrels for each batch with the contents thought to range between 5 and 25 years of age. It is non-chill filtered, natural colour and bottled at cask strength with this particular batch being bottled at 60.1% abv. Although Aberlour strive to follow a similar flavour profile with each batch, batches will have their own variations, peaks and troughs in both aroma and flavour. Indeed, part of the fun in trying the various batches is seeing how much variation occurs. 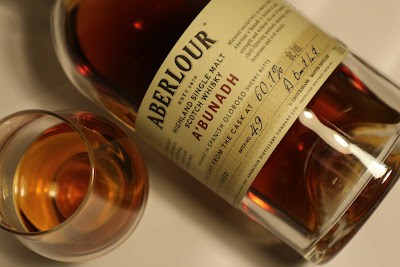 There is an immediate alcohol hit to the nose, quite fiery this batch. Strong wine notes and new leather, shoe polish, cola, glace cherries and possibly some raspberries too. Some spent matches but the overriding aroma is of young, punchy spirit. Water softens things considerably. Now we have vanilla meringues, sponge cake and toffee sauce, stewed fruits and berries, dried apricots, butter cream and milk chocolate.

Quite thin feeling in the mouth for cask strength, not as oily and mouth coating as I thought it would be. Sweet, nutty, toffee,baking spice and alcohol heat....jumps around on the front of the tongue. Some raisins and cola syrup. Definite hint of cherry. Chocolate orange and fresh ginger. Water makes this feisty dram calm itself. Now there is caramac bars, toasted nuts, sherry, muscovado sugar and sweetened black coffee.

Decent but maybe not the best A'bunadh I have tried. There is definitely a lot of younger whisky in the makeup of this batch...it is fiery and hot in both nose and palate and definitely needs water to settle it down. That said it means the bottle will go farther. For what I paid I think it was value for money. Would I pay over £50-£55? Possibly but I may be tempted to look elsewhere.

If the suggested price rises are to come to fruition then I would definitely think twice about buying another. For the £80 mark you could be looking at something like the Glendronach 18 Allardice which would offer much more poise and balance. Let's hope the price rises remain just a suggestion.
Labels: A'bunadh Aberlour Cask Strength NAS Scotch Single Malt Whisky