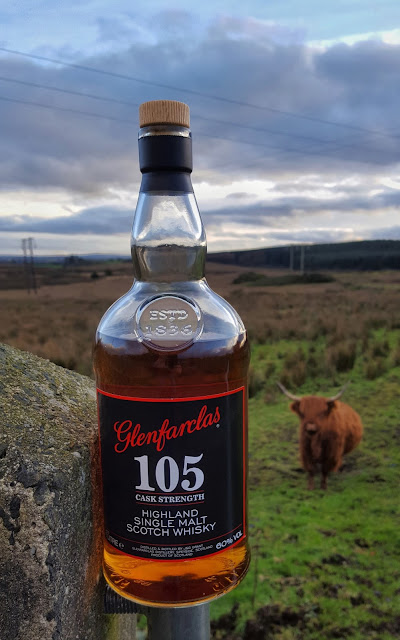 For the second of my cask strength 'sherry bomb' reviews we are looking at the Glenfarclas 105. I gave you a brief oversight of the history of Glenfarclas with my review of the 15 year old so no point re-treading old ground there.


Interestingly the 105 can be traced back to 1968 and Glenfarclas were the first distillery to release a cask strength single malt. Thanks to the guys at Master of Malt for that little gem of information! It would seem the 'sherry bomb' has been in existence for quite a while then.

It's funny when I mentioned I had bought this bottle to a friend he said that although he had seen Glenfarclas many times before he never felt compelled to buy one because of their looks. He felt the design was a little low rent and not overly appealing.

It's funny how you can discount a whisky based on bottle design even before you have ever tried any of the actual liquid. Then again its why distilleries spend small fortunes on brand redesigns and new bottle styles. Personally I'm not really bothered how whisky is presented as long as the liquid inside actually tastes good.

Unfortunately there seems to be a trend these days to spend more money on packaging and advertising than making sure the liquid inside is worthy of someone parting cash for it. Haig Club and Highland Park spring to mind immediately.

I have always like the retro charm of the Glenfarclas products. Understated, a bit traditional, not flash but more importantly the stuff they put inside the bottle is actually pretty good and often overlooked for the more garishly appointed brands.

As regards the contents of this bottle, the 105 is aged between 8-10 years. You won't find that on the new Glenfarclas website, but it was stated on their old site. They don't water down the casks to achieve the 60% abv either, they allow the maturation process to bring the abv down to 60% and bottle at that point. Glenfarclas are renowned for aging their wares solely in sherry casks but there are rumours that the 105 may contain some bourbon cask matured spirit. It's natural colour and non-chill filtered. 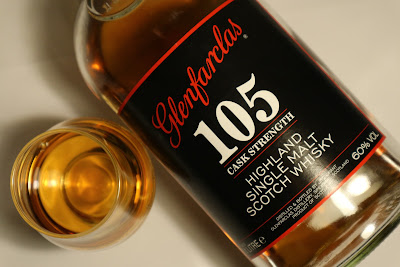 A slight alcohol tickle to the nose but surprisingly gentle for 60% abv. Dry sherry immediately off the bat - time brings sweet malt, sultanas, crushed brazil nuts, dried fruit such as fig and date, fudge, milk chocolate, mocha. There is the faintest hint of spent matches, then allspice. Lurking in the background are freshly cut apples and pears. Water lessens the alcohol sting. More malt to the fore now, an extra helping of chocolate with honeycomb, vanilla and spiced rice pudding.

A more assertive, defined and balanced dram than the Aberlour A'Bunadh Batch 49 reviewed previously. It also feels just a bit more mature than the Aberlour. Not a sherry bomb to everyone's taste as it falls on the drier, spicier side of the tracks rather than the Aberlour's sweeter, fruitier notes.
At the present price of around £50 a bottle I think this is hard to look past and offers substantial value for money.