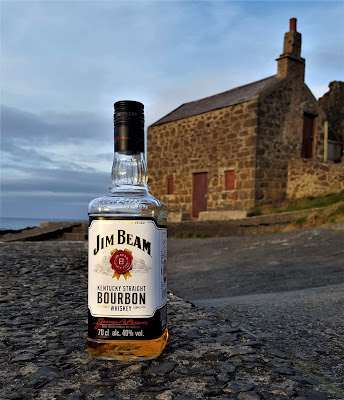 Jim Beam is the best selling bourbon whiskey in the world and at current production is filling 500,000 53 gallon (u.s.) barrels a year which is a truly phenomenal amount of whiskey production. The original distillery was started by German immigrant Johannes 'Reginald' Beam (originally Bohm) who began selling his wares in 1795. The Jim Beam name however didn't come into existence until 1935 when the James B. Beam Distilling Company was founded, named after James Beauregard Beam who managed the company during the prohibition era.

The White Label bottling is their flagship statement. Beam don't give out what its mash bill is but being a 'Kentucky Straight Bourbon' it legally must have at least 51% of its composition made up of corn. The mash is made up of the fresh grain and the 'set back', mash used from a previous distillation to help improve consistency. Beam have also used the same strain of yeast for fermenting the mash for the last 75 years. Jim Beam distil their spirit twice in a 65ft high column still producing a spirit that is 67.5% abv (130 proof). It is then transferred to new charred oak barrels where it sleeps for 4 years before being bottled. 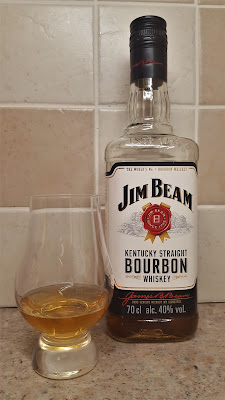 Thin & watery mouthfeel, diluted caramel, vanilla & a hint of spice from the rye

This particular expression can be found almost anywhere and it is cheap, some supermarkets were selling it at £13 a bottle in December. Therefore you wouldn't expect it to be complex or rewarding as a sipping whiskey and it certainly lives up to those expectations. This is not a whiskey that I would spend an evening over either neat or on the rocks, in fact I wouldn't even gift it to someone. This is strictly bottom of the whiskey shelf fare, only in my cupboard for mixing into long drinks & cocktails.
Labels: Bourbon Jim Beam Kentucky Straight Bourbon NAS Straight Bourbon Whiskey White Label