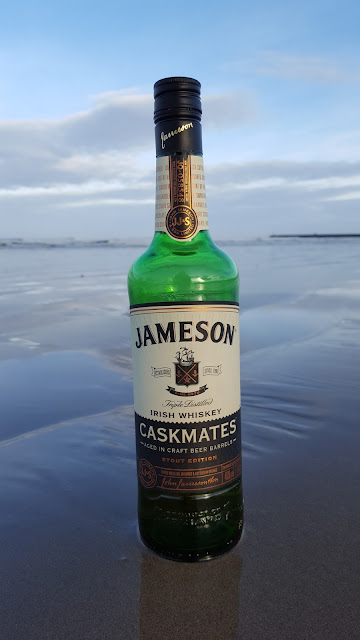 Quite a few years ago I remember buying a bottle of Grants Ale Cask Finish Whisky (I was just making my first forays into the world of scotch) and remember being impressed initially by the nose with definite hop notes and this bore through on the palate where there was a definite hop & malt overtone. I remember thinking, 'Why is nobody else doing this?'....after all ex-rum, ex-wine, ex-port, ex-sherry casks are used for finishing and maturation of whisk(e)y, so why not use beer barrels?

Thankfully somebody at Jameson had the same thought process and more recently Glenfiddich have experimented in the beer arena with their IPA finish whisky, so maybe this will become a thing!

How then did Jameson Caskmates come about? A chance meeting between Midleton Distillery's Head of Whiskey Science, David Quinn and the Head Brewer of the Franciscan Well Brewery (also based in County Cork) Shane Long led to this collaboration. Initially Jameson loaned the Franciscan Well Brewery some first fill whiskey casks so they could age a stout with them (for 3 months to be exact). The barrels were subsequently returned and David Quinn started to experiment with them which has led to Caskmates - regular Jameson whiskey which has been finished for a further 6 months in the ex-stout casks. Check www.jamesonwhiskey.com/en/ourwhiskeys/jameson-caskmates to read the offical information.

How does this affect the whiskey? Read on..... 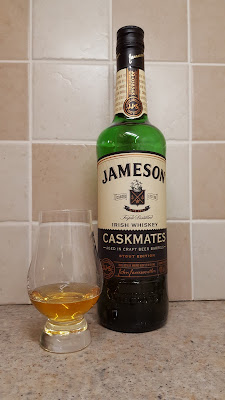 Light gold but a shade darker than regular Jameson.

Initial burst of alcohol (but not anywhere as harsh as regular Jameson), floral with a hint of grain cereal, almost rye-like, pot still spice, toffee and faint coffee revel at the end.

Medium length with a lovely earthiness from the cocoa/coffee combination. It really puts you in the mood for a pint of stout.

Whiskey & stout have been paired together on bar counter tops for years and they work as a great combination here too. Caskmates Stout Edition is for me a massive step up in quality over regular Jameson and I would happily pay the extra £5 or so to purchase this whiskey again & again. The flavour profile of the hops, cocoa & coffee really stand out and add much more complexity to this compared to its standard stablemate. It would be even more interesting if it was bottled at 43% or 46% and was non-chill filtered but even as is, it is a quality whiskey and one that I would heartily recommend.
Labels: Blend Blended Caskmates Irish Jameson NAS Stout Whiskey