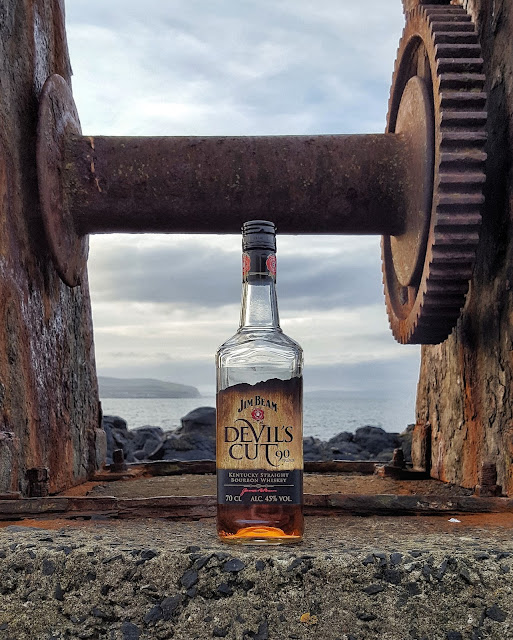 Devil's Cut has been part of the Jim Beam core range since 2011 and it's great innovation was to release the whiskey trapped in the barrel staves through the maturation process....so the whiskey lost through evaporation is the 'Angel's Share', the whiskey held in the oak itself has been christened the 'Devil's Cut' by Fred Noe (master distiller at Jim Beam).


So you ask, how do they release this trapped whiskey? Personally I would like to believe the process involves a retired circus strongman gainfully wringing the aforementioned whiskey from each individual stave with just his bare hands! That, however, is not how it goes.

Beam have developed a technique called 'sweating' (sounds appealing doesn't it?) - once the barrels have been emptied of their normal contents around 2 gallons of water is added and the barrel then given a good shake for around 30 minutes. This process allows some of the trapped whiskey to leech out into the water. This 'whiskey water' is then added to the original contents instead of regular spring water so it can be diluted to 45% abv (90 proof) before being bottled. 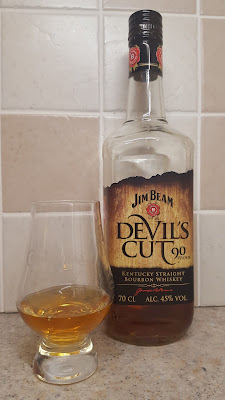 Hot, spicy & peppery leading to a hint of caramel but dominated by the oak

Unfortunately this is, for me, quite unbalanced, the palate just doesn't match the nose. Although the nose does exhibit a lot of woody notes the spices are still distinct but on the palate the spices are hard to pick out. Instead you feel as though you have been sucking on a stave rather than drinking a measure. There is just so much tannin activity in this expression and it overtakes the palate, in fact after one measure I really didn't fancy another.

I've seen this retailing in my local supermarkets for £16.50 which is a fair enough price. I don't personally think I would buy another bottle though. My advice....if you want a good drinking bottle of bourbon at a reasonable price spend an extra £3.50 and buy a bottle of Buffalo Trace. Even better spend and extra ten spot and buy a bottle of Woodford Reserve!
Labels: Bourbon Devil's Cut Jim Beam Kentucky Straight Bourbon NAS Straight Bourbon Whiskey Whisky