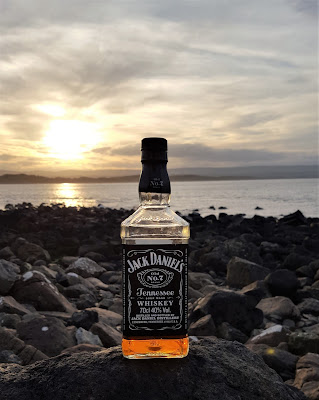 Jack Daniel's. As american as apple pie, it has achieved iconic status and is a marketing masterpiece. Famously a favourite with 'Ol Blue Eyes' himself, Frank Sinatra,.. Lemmy and Michael Anthony (he of Van Halen fame!), if it was good enough for them it was good enough for me! This was my starting point into the world of whisk(e)y when I was 18 and so it will always have a place in my affections (although these days it is definitely a long, long way down the list!). The only thing better than a Jack & Coke was a double Jack & Coke. However, I must confess that before I did the tasting for this review I had never had JD from a Glencairn Glass and I doubt I will again after it. That comment may well give you an inkling into how this 'legend' will fare.

Before we get to the tasting how about a little background info?

Although the bottle states 'Est & Reg in 1866', Jack Daniel's biographer asserts there is documentation that officially registers the brand in 1875,  however, the company have been celebrating their 150th Anniversary in 2016 with commemorative bottlings and limited edition runs.

Often people ask is Jack Daniel's a bourbon? Well to make bourbon whiskey your mash bill has to contain at least 51% corn. The fermentation process is often started with 'sour mash', that is mixing in some older mash from an already fermenting batch. The distilled spirit can be no more that 80% abv (160 proof) and when put into the cask can be no more than 62.5% abv (125 proof). The casks for aging by law have to be of new, charred oak and can be used just once. Bourbon whiskey does not have a minimum aging rule but to be called 'Straight Bourbon' it must be matured for at least 2 years. So technically Jack Daniel's with its mash bill of 80% corn, 12% barley & 8% rye and its distillation to 70% abv (140 proof), does meet the requirements to be considered a bourbon.

But, Jack Daniels is branded as a 'Tennessee whiskey' and here's why. They add another step called 'The Lincoln County Process' which is charcoal mellowing. Every drop of new make spirit made at Jack Daniel's is poured over 10 feet of sugar maple charcoal which removes impurities and tempers the taste of the corn. Jack Daniel's is matured for an unknown period, as their website states, it's ready when it's ready! 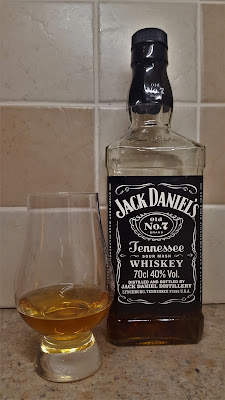 Thin & watery, initial heat kick moves to sweet toffee that gives way quickly to something quite chemically and astringent.

Short, never really passes the front of your tongue, a slight woodiness that leaves the mouth dry and that chemical aftertaste comes through again.

Not particularly impressive, a very one dimensional drink and a victory of advertising over quality of product. Definitely not a sipping whisk(e)y. This belongs in a tumbler, preferably with lots of ice and doused in cola of some description and a lime wedge. I can see why it is popular, as a mixer or cocktail base it is perfectly adequate and it is relatively cheap, most supermarkets will have it on offer for £15 a bottle regularly and that initial sweetness probably appeals to a younger palate but it just doesn't do much for me anymore.
Labels: Black Label Bourbon Jack Daniel's NAS Old No.7 Tennessee Whisky Whisky