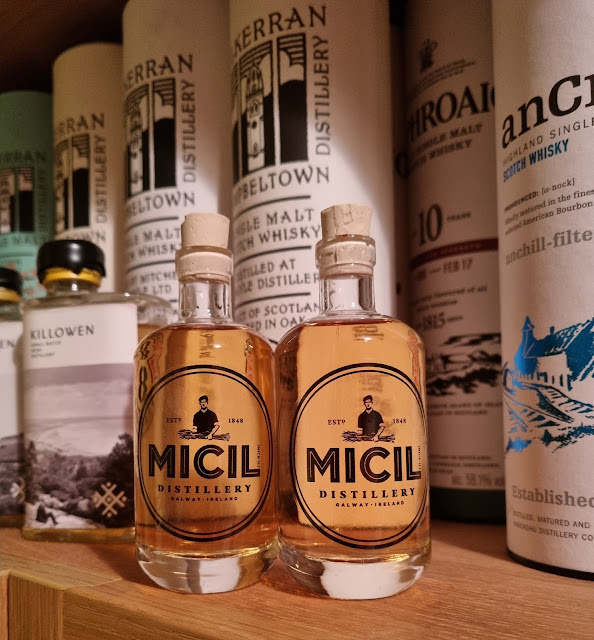 Things have gotten a little quiet around here on CCWR with new reviews so I decided to try and put that straight with a couple of new Irish whiskey reviews. First up two drams from Micil Distillery in Galway followed by my thoughts on the new McConnell's Sherry finish release. As you can see from the lead photo I was sent these samples, so thank you to the guys at Micil, especially Mark McLaughlin who reached out to me about the releases.
These two expressions have been available for a while now being released in December 2021, in fact I received these pre-release which highlights my recent tardiness regarding reviews. Better late than never I suppose.
Micil Distillery is named after the founders great-great-great grandfather Micil Mac Chearra who began distilling illicit poitín over 170 years ago in 1848 in the Connemara area. Brothers Pádraic and Jimín Ó Griallais have taken this family craft from the illicit to the legal with the construction of Micil Distillery.
Micil is Galway's only operating distillery opening in 2016 and at first producing poitín and gin before laying laid down whiskey stocks in January 2021 marking the return of legal whiskey production to the Galway area in over 100 years.
Surrounded by an abundance of peat as a fuel source, whiskey and poitín from the Galway and Connemara area would have historically been peated and the lads at Micil plan to carry that through with their own whiskey, primarily planning to create peated single malt and single pot still whiskies.
Galway itself was also a very important trade city welcoming merchants from Spain, France and Portugal and of course their associated wines. To highlight that heritage Micil will be using the full gammut of wine and fortified casks at their disposal.
The eagle eyed of you out there will have quickly realised that if the distillery only laid down it's first whiskey in 2021 that the whiskey in the samples certainly didn't come from their own stills. But Micil are very open about this highlighting that these releases are independently sourced. I haven't asked the question as to where this sourced liquid is from but I'd be pretty confident that it is from Great Northern Distillery who certainly have the set up to provide the variety of liquids used in the blend especially (Update as of a few minutes after typing the above paragraph - on the Micil website you can download a product specification pdf for each whiskey and they confirm it is indeed GND liquid).
Micil Inverin Small Batch - blended Irish whiskey, bottled at 46% abv, non chill filtered, natural colour with an outturn 8,580 bottles. Price: £38.50/€45 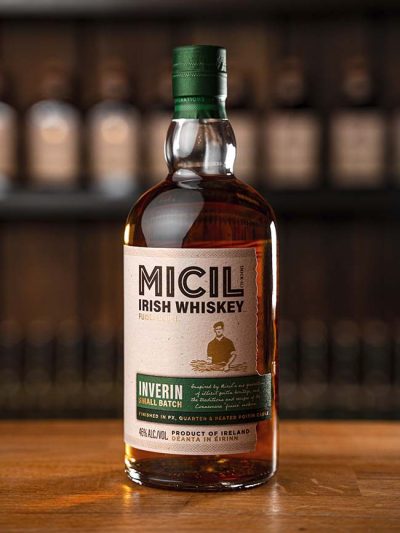 So this is a complicated little beast.....bear with me.
The inital Inverin blend is made of five components - 20% virgin oak grain whiskey, 45% ex-bourbon grain whiskey, 20% triple distilled ex bourbon peated malt, 10% double distilled ex bourbon malt and 5% triple distilled ex bourbon single pot still.
This blend was then finished separately in two cask styles: re-charred ex-bourbon american oak casks and pedro ximenez casks.
Next up came a 2017 double distilled malt that was matured in bourbon and finished in a 225 litre px cask. Some of this liquid also made it's way into a bespoke 50 litre virgin chestnut cask that held Micil's Heritage poitín for 6 weeks before being disgorged and filled with the malt. After a 9 month finishing period in the re-charred bourbon and px casks the components were all vatted together before being cut to 46% abv for bottling.
So.....you are nearly there....the final component breakdown goes as such: 47.5% Inverin Blend (see above) finished in re-charred bourbon casks, 47.5% Inverin Blend finished in px casks, 5% double distilled malt finished in heritage poitín cask and 225 litre px cask.
Phew! You made it! Let's get the tasting notes shall we?
Nose: A whiff of gentle smoke. Apple puree with ripe conference pear. Honey, vanilla, a little clove and pepper. Chamomile and candyfloss. All held together by that mild, vegetal peat smoke.
Palate: A really soft and velvety arrival with honey sweetness, vanilla and a note of foam banana candy along with Haribo sours. Then comes a warming build up of pepper and clove rock wrapped in a delicate smokiness. Time allows a chocolate note to come through plus some lemon zest.
Finish: Quite short with the clove spice and ashy smoke the dominant notes.
Score: 5 out of 10
Micil Earls Island - single pot still, bottled at 46% abv, non chill filtered, natural colour with an outturn of 1,272 bottles. Price: £47/€55 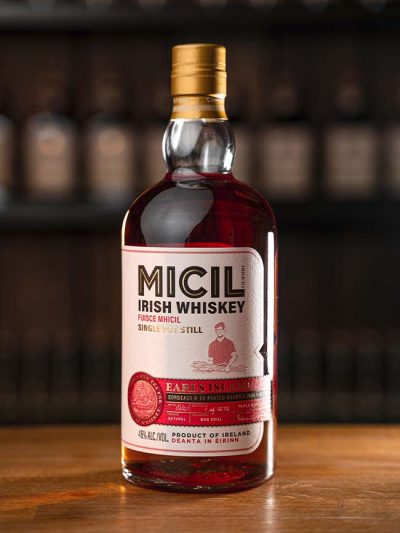 Okay, this is much simpler to explain! Initially matured in ex-bourbon casks, 75.5% had a nine month finish in 225 litre Bordeaux red wine french oak casks with the other 24.5% having a nine finish in 125 litre peated American oak quarter casks.
Nose: Really herbal and citrusy on the nose. Juniper, fresh basil, caraway. Then lemon slices and grapefruit peel. Sweet cinnamon and nutmeg next. Eventually there's a hint of strawberry, raspberry and cherry menthol alongside mild peat from the quarter casks.
Palate: On arrival it's a bit sweet and sour. There's honey, vanilla and an element of green malt with tart citrus peel and juniper. Mid palate we get pepper spice with fresh ginger and spicy french oak. Some chilli dark chocolate and wisps of peat smoke complete the deal.
Finish: Short with chocolate, ginger, mild peat and lingering juniper.
Score: 4 out of 10
Overall:
Irish whiskey is rapidly becoming a crowded market and of course brands are trying whatever they can to differentiate themselves especially when it comes to sourced products. While both of these are interesting neither really got my pulse racing but I applaud the effort at least.
Of the two the Inverin is the more successful for me. When I read the component breakdown I feared a little that they were trying to be just a little too busy but that fear subsided when I nosed and sipped it. It's a really approachable dram but I do feel there are other blends out there that warrant attention more than this especially at the price point.
The Earls Island is a funny one. The nose and palate are very different. The nose is so herbal and citrus driven I feared we were verging into gin territory. The palate does manage to steer away from that but it is very much on the herbal side like a lot of young GND sourced pot still I've tried. This needs much more time and even something as forceful as a Bordeaux red wind has struggled to impart much fruitiness to proceedings. Again the pricing for me is an issue but I get that that is also part of the problem of being a small distillery and sourcing spirits.
Like I've said about other distilleries though these are not the products that I will really judge Micil on, that will come when they release their own stocks, and if their Heritage poitín is anything to go by, well we'll be in for a treat.
Labels: Blend Earls Island Inverin Irish Micil Distillery Single Pot Still Small Batch Whiskey