A Visit To Waterford

As I started to write this piece I decided to read the back of a few of my bottles of single malt and the associated boxes that the bottles came in. It is quite striking to note what is printed. You may read about the superb craftsmanship of the spirit, pure spring water used in its creation, salt air and its impact on the whiskies maturation, knowledge passed down through generations... the list goes on. One thing that features on nearly every bottle though is wood – cask types and the flavours they imbue on the spirit inside (and even then it may only be a cursory nod to the wood). In short, you get a lot of marketing bluster.

What no one really talks about is the barley. Sure, you may get 'We use the FINEST barley' but that's basically your lot. No mention of varieties, growing conditions, locality. Strange considering the humble barley grain is really the backbone of the great nectar we know as whisky.

Mark and Adam are the terroir specialists here at Malt, and Adam did a spectacular job highlighting the difference in information levels available between wine and whisky in his Longrow Red review in March. Suffice to say the whole process is celebrated – soil types, climate, fermentation, casks – but the grape is King. Heck, even craft beers will give information on the malts and hops used as well as any extraneous flavourings such as herbs or citrus fruit.

Step forward Waterford Distillery. As fortune would have it, I was able to visit the distillery on the tail end of May, as part of a road trip to another, maybe better-known distillery which I will write about at a later date. I encourage you to check out the excellent Waterford Distillery website that will fill you in with more information than I could possibly remember or recite on this forum.

On arrival, we were greeted by the extremely affable Ned Gahan, Head Distiller at Waterford. After a brief introduction to all the gang, we made our way into the distillery proper where we were joined by Head Brewer (and equally as affable), Neil Conway, who along with Ned talked us through the ethos and processes of making Waterford whisky.

As you set foot in the distillery there are five diagrams on the wall that give a visual guide (which you can see here) to the barley, malting, mashing & fermentation, distillation and finally maturation. We stood at this point for at least one hour and twenty minutes to discuss the whole process. An hour and twenty minutes… I kid you not! Most tours barely last that long.

So just a little about the process. Waterford sources their barley from 61 farms in Ireland, but they have a tight specification for their barley and so they only use 40 of these farms at any one time. In fact, they run a league table, as such, of growers and even have an annual cup for the top of the tree. This helps generate a little friendly rivalry between the farmers. And just because you make the grade this year doesn't necessarily mean you make the grade the following year. This year two varieties of barley are being used, Olympus and... well actually I forget as I foolishly didn't take notes. Last year 5 varieties were harvested.

After harvest, each of the 40 farms is transported to 'The Cathedral', the barley storehouse where each farm has its own individual bay. Each farms barley is malted, mashed, fermented, distilled and matured individually and everything, and I mean everything is logged. 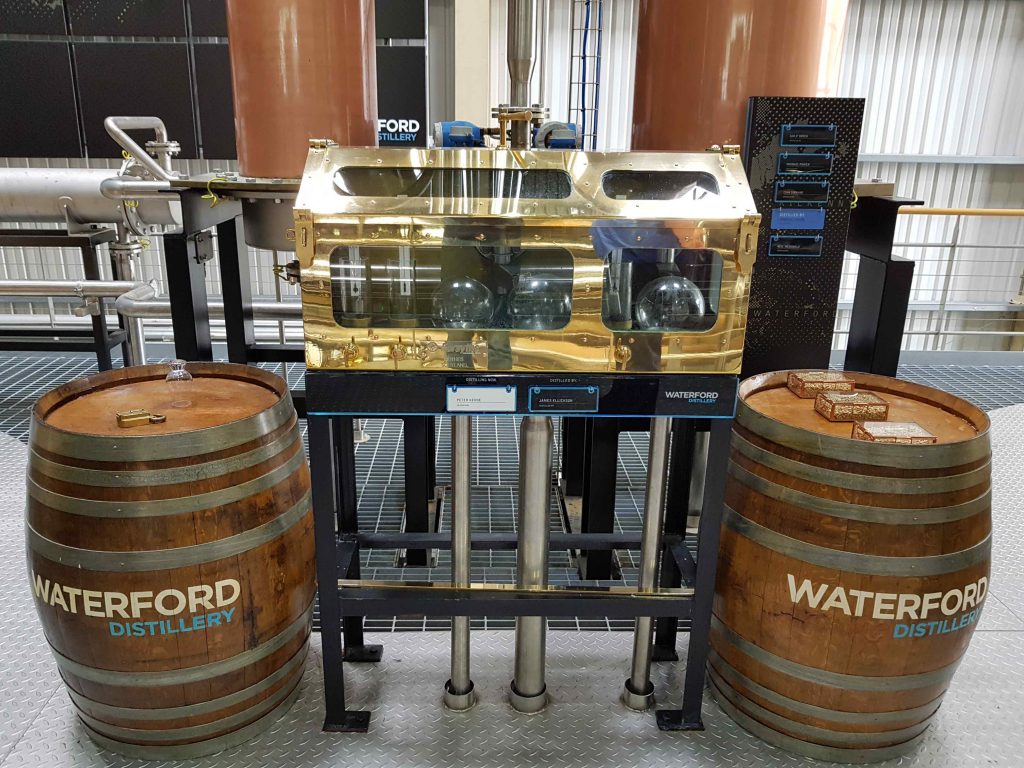 Waterford double-distill, producing a distillate that is roughly 71% ABV give or take a percent or two. They run the spirit still 'low and slow' in their own words, taking the cut at around 35 minutes on the spirit still. After all the spirit for the individual farm has been produced, it is collected in the spirit tank to be tankered off to their warehousing in Ballygarran for casks to be filled. Each farm has its spirit split into first-fill bourbon casks (50%), virgin oak casks (20%), premium French oak casks (15%) and vin doux naturel casks (15%) – that's sherry, port and madiera to you and me. Then the slumber begins.

At this point, it was on to the stills themselves. The stills originally resided in Inverleven before being sold to Bruichladdich in 2003, where one of them resided in the courtyard. After the Bruichladdich sale, Mark Reynier managed to obtain ownership of the stills. 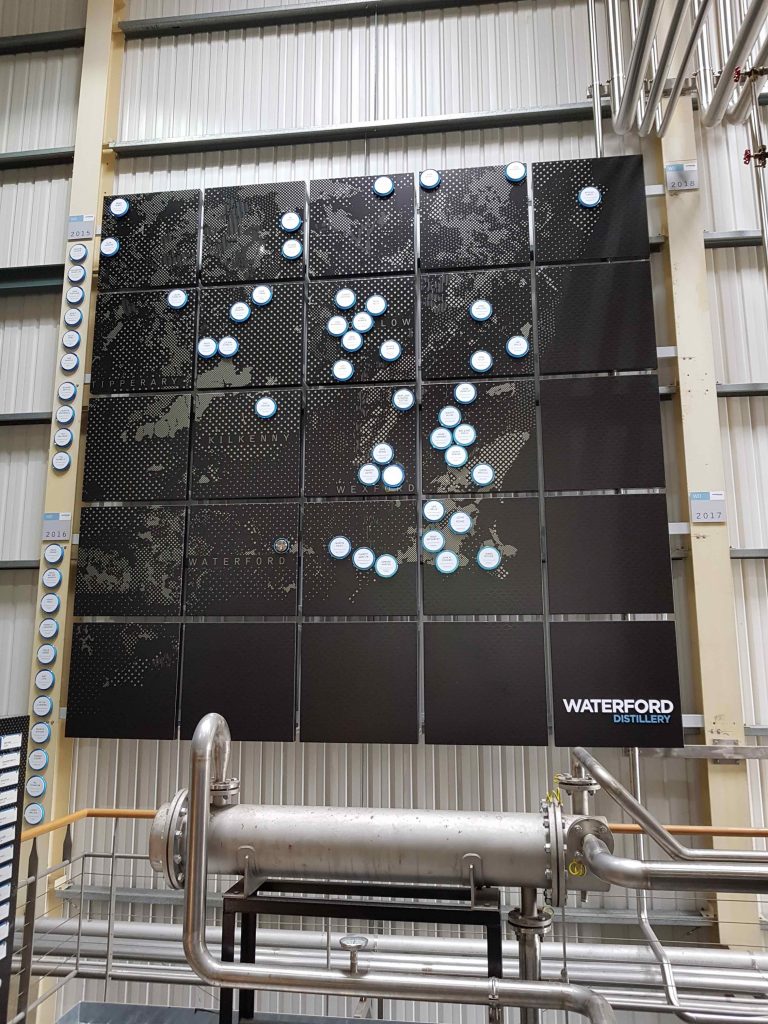 Behind the stills lies the infamous Map of Provenance. Lit up on the map that day was the farm belonging to Peter Kehoe. Beside the still safe were samples of barley. The first was conventionally grown barley that tasted typically biscuity and slightly nutty. The second was organic barley. This was sweeter and more rounded in flavour. The third was biodynamically grown barley which had a really deep earthy quality to it. All the same variety, Olympus, all very different tasting.

Then it was off to the control room. All the brewing and distillation processes at Waterford are controlled by computers, that's why Mark Reynier calls it 'The Facilitator'. It is slightly cold and very industrial (it was an old Diageo brewery after all). He says himself that it is hard to fall in love with Waterford compared to a distillery like Bruichladdich. The difference is control. But because all the processes are computer controlled it means that every single farm distilled through Waterford will undergo a consistent process where variables introduced by humans are practically non-existent – thus allowing the barley to speak for itself.

It was at this point we were introduced to the barley 'passports'. Each farm's consignment of barley is individually logged. Information about the farmer, the exact field, its exact location coordinates, soil type, micro-climate, barley type, protein levels, moisture levels etc. The level of information is astounding. 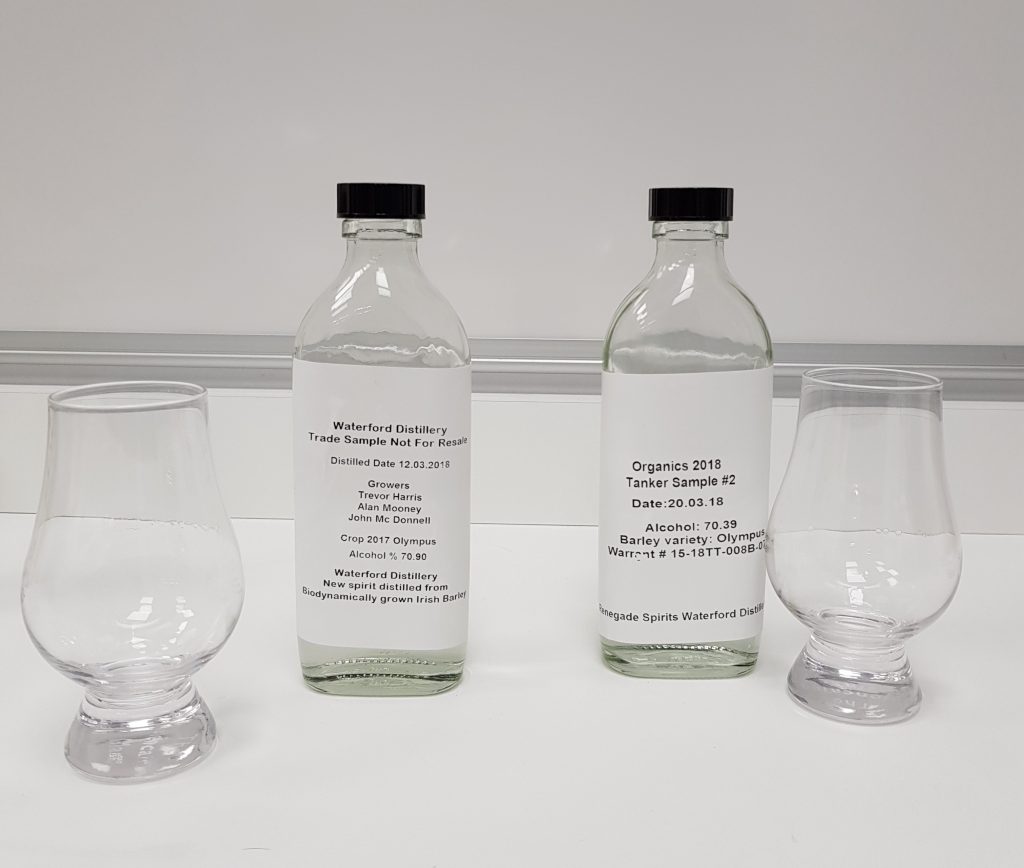 Then the important part: the Tasting Room.

To start, Ned pulled out four new makes. These all used Olympus barley as the variety but were from different farms and had different dates of distillation. All were also cask strength.

Sample 1 was conventionally grown. It tasted initially sweet and malty but quickly dried the palate leaving you searching for moisture. Sample 2 was organic. This tasted of cereal notes and some lime zing, lively with a real spicy kick on the finish. Sample 3 was biodynamically grown. This was dense, viscous and very, very earthy, almost mouldy with the same drying effect on the palate as sample 1. Sample 4 was again conventionally grown. Like sample 2 this was a lively affair, citrus oils present with white pepper but just a tad muted compared to sample 2.

Then Ned gave us another new make, his favourite and asked us to express what we got from it. I picked up massive strawberry and raspberry notes. Ned broke out in a smile. My friend Odhrán picked out a saltiness in the finish. Cue another smile. Ned explained this sample came from Wexford, slap bang in the middle of strawberry growing country and that this particular field was beside the sea. Boom! Who says terroir in barley makes no difference? Five new make spirits, five unique tastes. 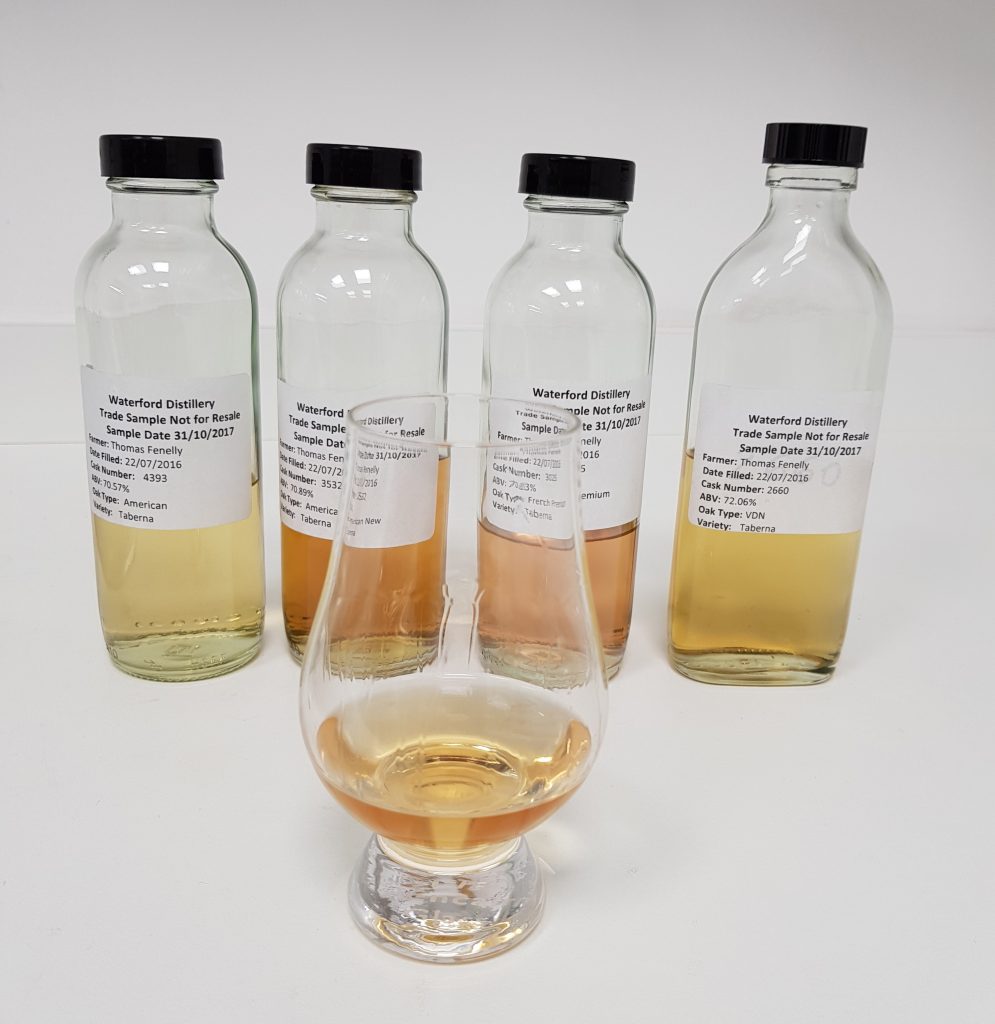 Next, we were allowed to pick a farm that had spirit maturing. The farmer in question was Thomas Fenelly, the casks were filled on 22/07/16 and the samples taken on 31/10/2017 making the spirit 15 months old – not quite halfway to being called whisky, but look at the colour. No e150 here. Unfortunately, we didn't get to taste the new make so I couldn't say if the new make flavour profile was decipherable past even this short maturation period.

What I can tell you, briefly, is how they tasted. The first-fill bourbon was sweet, malty with vanilla and actually quite mellow. The virgin oak was as expected much more forceful, heady toasted oak aromas, oily in the mouth with prickly spice and honey. The French oak was a Sauternes cask, which gave the spirit a wonderful pink hue, red berries on the nose and a sweet top layer of crème brulee, berry compote and oak dryness to balance the sweetness. The VDN cask, most likely a sherry cask but I don't know for sure, was creamy with a touch of caramel, nutty and really mouth coating. Ned then blended all the samples together which you see in the picture. Toffee, marshmallow, vanilla and plenty of spice from the virgin American oak and the French oak. Delightful stuff. Even at just 15 months of age, this would easily trump most bottles available in your local supermarket. It just goes to show what can be achieved with care and attention to detail. 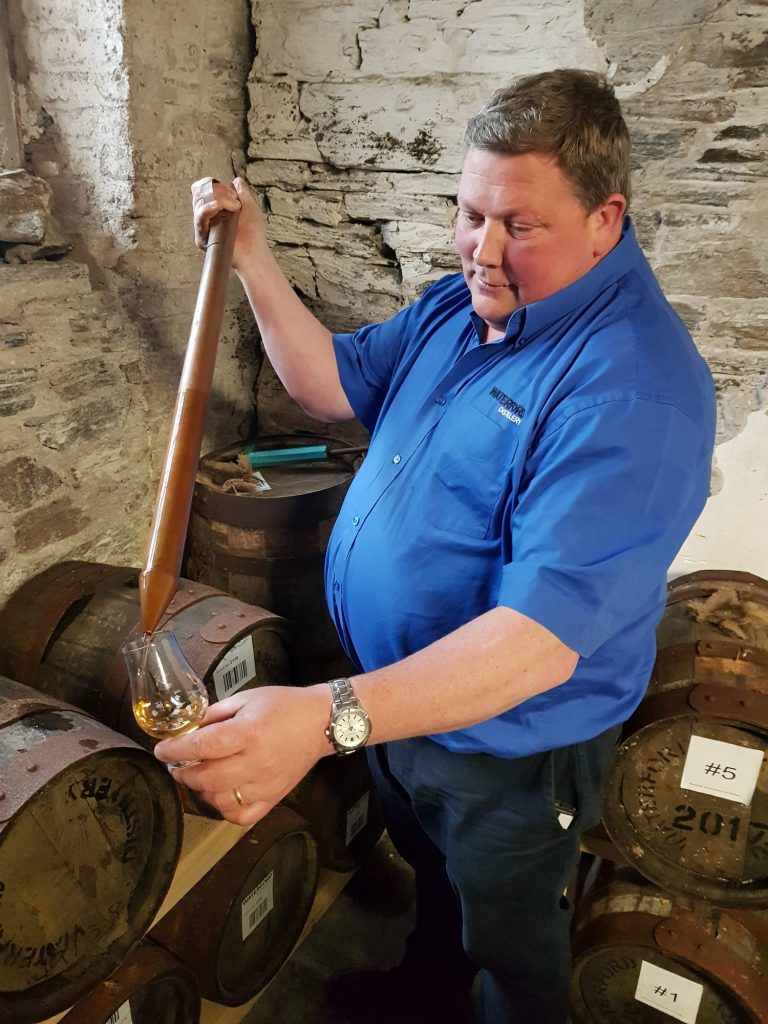 Finally, we were allowed into the on-site cellar to try something straight from their bloodtubs. In this cellar Waterford has small, 35-litre barrels filled with each batch of distillate since they started. This allows them to get a picture of what is happening down the road in Ballygarran.

Now you may have heard that 70% of a whisky's flavour comes from the wood. This is something that is consistently trotted out by the marketing folk of many brands. In essence, they are saying the distillate doesn't really matter because the wood is the major player. In the cellar, a sample was drawn from a cask that had been filled with neutral spirit. Spirit at around 96% abv and stripped of any flavour in and of itself. The spirit had spent around 18 months inside the cask so should, in theory, be pretty flavourful if the wood was doing its job. It smelled and tasted of damp wood. There were no complex aroma or flavour profiles developing; it was a bit rank really. They also had a cask with just plain water inside. This wasn't tasted but smelled like two-year-old sweaty socks mixed with ripe camembert. Not appealing.

The whole tour really had been an eye-opener for me. I admit I was a bit cynical about the idea of terroir but I tasted the results and they spoke for themselves. Also, the industry trope that wood is the major flavour profiler, contributing 70% or more of the flavour also seems a bit simplistic to me now. Admittedly the wood will play a part, but equally so will the previous contents of a cask be it bourbon, sherry or wine, as will the spirit itself, as will a casks storage conditions, as will time itself. It's all an amalgam of the wonderful process we call whisky making and all are vitally interrelated.

In Waterford, Barley certainly is King. It is celebrated and has been given the chance to make its mark and show its importance, but also of equal importance are the brewing, fermentation, distillation and maturation.

If I was to sum Waterford up I would say passion, enthusiasm and attention to detail are the order of the day. It will be 2020 at least before Waterford releases the first vintage. As they produce 1 million litres of alcohol a year, the resulting whisky is more than likely not going to be cheap, probably rivalling or exceeding Dingle prices. However, from what I have tasted it's likely to be worth it. I'll start saving now.

Thanks to Ned and Neil for showing us around. Thanks also to Mark here at Malt who made the tour happen.