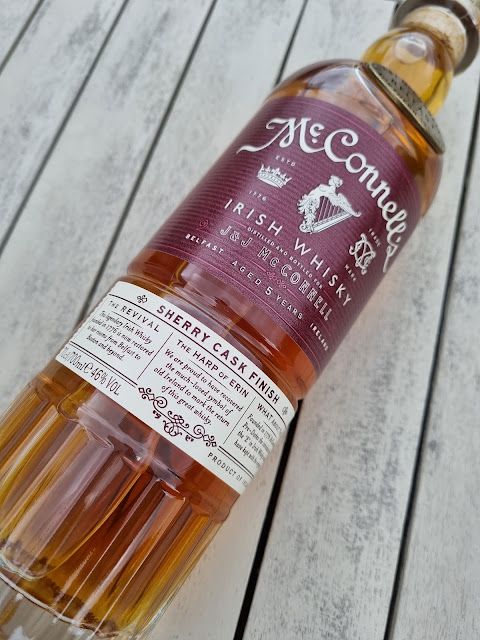 So let's get the elephant in the room addressed straight off the bat....I didn't pay for this bottle, it was gifted to me by the good people of McConnell's at their own risk. Hopefully you know the drill by now, just because it was free does not mean I'll play nice! See how easy it is to say you got free stuff?
Lazarus brands (i.e. those that were dead but now have a spring in their step once more) are a bit of a thing in Ireland. I suppose John Teeling got the ball rolling back in 1987 reviving the likes of Locke's and Tyrconnell. IDL even played their part with Redbreast although it hadn't really dropped of the radar for too long.
In more recent times we've seen Dunville's, Egan's, Matt D'Arcy, Old Comber and Roe & Co all come back to market. Added to that list was McConnell's back in 2020 under the stewardship of Conecuh Brands and the Belfast Distillery Company.
As well as resurrecting the McConnell's brand the Belfast Distillery Company are also investing significantly in a new distillery facility at the Crumlin Rd Gaol.
McConnell's was originally setup in 1776 by brothers John and James McConnell, quickly becoming a powerhouse brand in Irish whisky (notice...no 'e') and becoming well established in North America. Things took a decidedly sour turn in 1909 when a fire at the distillery gave those greedy whisky angels an unwelcome sacrifice of 500,000 gallons of whisky and destroyed a significant portion on the distillery.
Undeterred the distillery was rebuilt and production resumed only for the advent of Prohibition in the US to put another spanner in the works. McConnell's left the US market in 1930 and ultimately the Belfast Distillery itself closed in 1958.
So after a 90 year wait the McConnell's brand is available once again in the US and obviously here in Ireland too.
I will admit that I wasn't massively taken by the original green label McConnell's 5 year old blend. The blended market is extremely crowded in Ireland and it can be hard to really standout. So what do we get with the Sherry Cask finish.....other than the obvious Sherry Cask finish?
So it's the same blend as the green label, approximately a 60/40 grain/malt split bottled at 46% instead of 42% and it's non chill filtered, although I have no indication as to whether it is natural colour. If colour has been added its certainly not over the top. Maturation is 5 years in first fill bourbon followed by 9 months in oloroso sherry casks for 9 months. The RRP is £40. 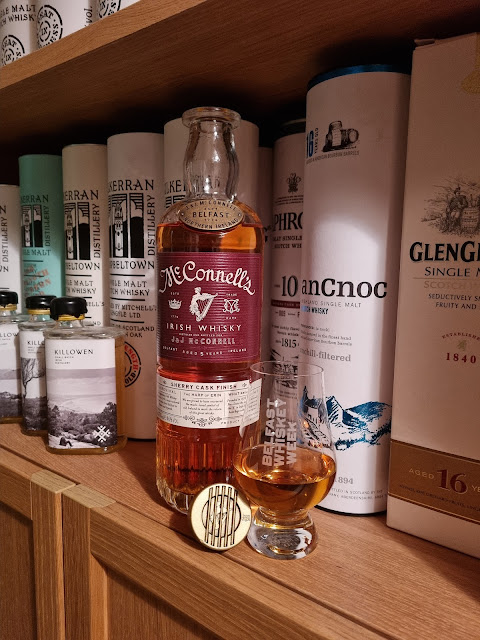 Nose:
Straight away you are greeted by a big hit of juicy raisins and almonds. Sherry, mixed peel, vanilla, milk chocolate, red apples and toffee popcorn. Some baking spices of cinnamon and nutmeg too.
Palate:
A very nice mouthfeel, velvety and quite oily. Dark brown sugar, plump raisins, cinnamon and clove rock sweets. Some black pepper with marzipan and Cadbury's Caramel bars.
Finish:
Short to medium with chocolate, caramel and warming baking spices.
Score: 6 out of 10
Overall:
I have to say that this surpassed my expectations. It is a bit of a sherry bomb and it's obvious in this batch at least that the sherry casks have been active and pronounced. As such it is a bit one dimensional but it's well constructed and integrated and has more than enough going on to make you want to go back for more.
In fact I sat this down beside a Glendronach 12 year old and the McConnell's fared very well beside it, it definitely doesn't feel like you are drinking a 5 year old blend. Hopefully McConnell's can keep the quality up on this. As it stands it's a blend that doesn't cost the earth and if you have a sweet tooth and are partial to your pronounced sherry finishes then this will be right up your street.
Labels: 5 year old Blend Irish McConnell's Sherry Finish Whiskey