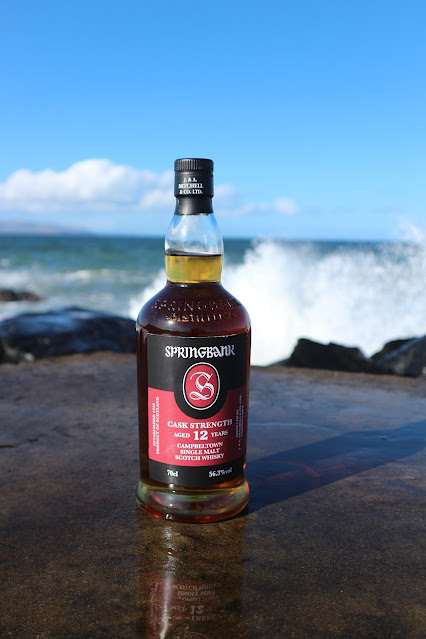 Springbank. The whisky lovers distillery of choice. And what's not to love about Springbank as an entity? A distillery of, by modern standards, tiny capacity and even less output where everything is done by a human. From the floor maltings to bottling and labelling, everything is done by hand. It's massively inefficient and yet they continue to charge fair prices for their products.
As such Springbank garners feverish, almost cult like status amongst whisky enthusiasts the world over. As it's reputation grows so does it's fanbase and crucially, demand for it's products. Sadly Springbank has become a 'flipping' nightmare for many of said fans. As demand outstrips supply, especially in the home markets, many of the Springbank expressions head directly from shops to online auction houses. Even the staple 10 year old can be extremely difficult to source.
So in light of this feverish attitude towards Springbank actually daring to say something critical of their products can be, well.....fraught with danger to say the least (as previous experience has taught me).
But here's the rub about Springbank and the other brands they produce, Longrow and Hazelburn. That handmade production ethic, the thing that gets whisky enthusiasts giddy the world over, can also be Springbanks Achilles heel in a sense. Why? One word - variability!
Springbank is inconsistent but that's also a reason why I love it. Some I've tried have been poor, others epic. But that inconsistency and variability are why I personally return....it makes the really good ones that much better!
So moving along in this first review I'm looking at four expressions from the core range- the 10 year old, 12 year old cask strength, 18 year old and 21 year old. The subsequent expression will look at four limited releases. 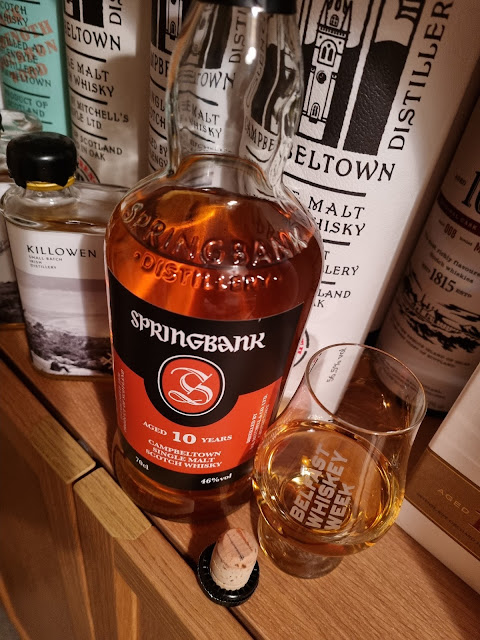 Springbank 10 year old (2021 bottling) - 46%, Natural Colour, NCF.
Bottled 17/08/21 with code 21/120 it's matured in a combination of bourbon & sherry casks. I bought this at Fairley's for around £45.
Colour: Dull gold
Nose: Orange syrup, ripe red apples, anise, guava, fresh oak and walnuts. Brown sugar, wet pebbles, cinnamon and a new leather chamois. A hint of marzipan. The textbook industrial notes of diesel and soft peat smoke are there too.
Palate: A great texture to this - oily and creamy with some sweet, savoury and spice notes in the nix. Barley sugar, vanilla fudge and orange oil. Tinned peaches and salted butter. Crushed mixed peppercorns, menthol, clay and wet rocks. Sooty chimney smoke and harbour ropes.
Finish: medium to long with plenty of salinity, soot, fudge and citrus. 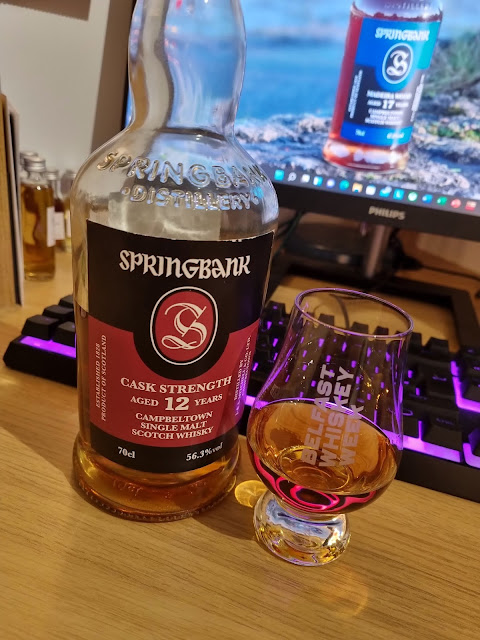 Springbank 12 year old Cask Strength Batch 16 - 56.3%, Natural Colour, NCF
This was bottled 04/01/18 with code 18/001 with an outturn of 15,000 bottles. It's been matured in both bourbon and sherry casks at at 30/70% ratio. I bought it from the Whisky Exchange for the quite ludicrously cheap price of £46.63
Colour: Amber
Nose: Burnt sugar, sherry and ash. Then salt air, roasted coffee beans and milk chocolate. Baked apples, ginger, pineapple segments, coconut and shoe polish. A slight note of struck matches with gentle peat. In time I picked up on a faint but definite yeasty and slightly cheesy note that felt a little at odds with the rest of the nose. Water thankfully killed the cheese note and brought salted meat notes.
Palate: At full strength this initially seemed hot and a little closed. Mouthfeel was good though with a great oiliness. Time brought creamy malt, burnt sugar and dry sherry. Raisins, ginger and cloves with a healthy dose of pepper too. Then it became dirty and oily. Some red berries, salted peanuts and balsamic. A little sulphur too though. Water brings out more industrial character while taming the tannins and spices.
Finish: Pretty long with malt, soot, strawberries and oak. 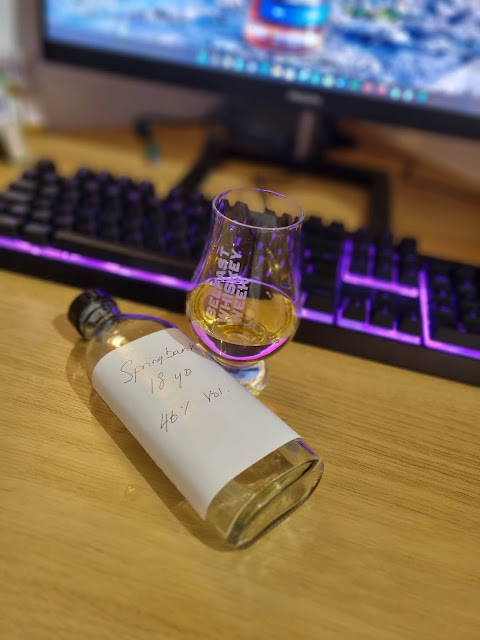 Springbank 18 year old (2018 bottling) - 46%, Natural Colour, NCF
This is expression was fully matured in bourbon casks and would have set you back around £100. Thanks to Ian O'Brien of Waterford Distillery for the generous sample.
Colour: Virgin Olive Oil
Nose: Quite fruity - orange cordial, pear drops, pineapple and papaya. Chalk, sea spray and white chocolate. Pepper, menthol and gentle peat.
Palate: After the nose this is disappointing. A thin mouthfeel on arrival. Caramel and some Campbeltown dirt and funk before peat and pepper. More sour and sharp than the fruity nose - lemon, grapefruit and a chalky minerality.
Finish: Oil, soot, wax and oranges and medium in length. 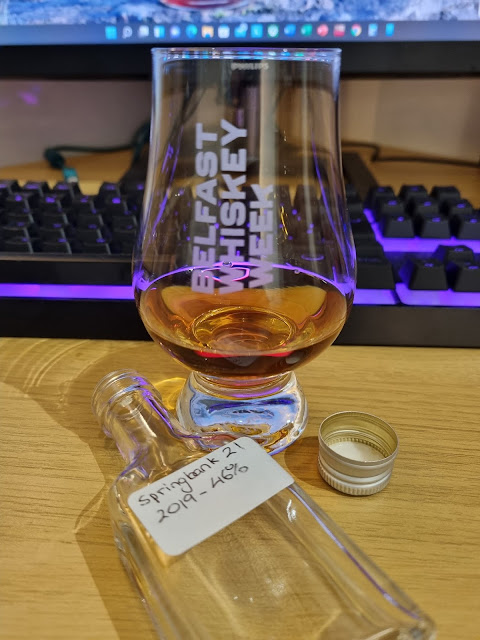 Springbank 21 year old (2019 bottling) - 46%, Natural Colour, NCF
Limited to an outturn of 3,600 bottles and matured in port and rum casks at a 45/55% ratio this would have cost £200 on release. Thank you to Ian Considine (@whiskyweather) for the generous sample.
Colour: Aged Copper
Nose: A super fruity and wood driven nose. All the berries - blueberry, strawberry, blackberry and raspberries in a compote. Black cherries, rum soaked raisins, vanilla and coconut. Some cough tincture, dark chocolate and sawn oak. Hazelnuts with a chalky note too. Missing the industrial funk of Springbank.
Palate: Again quite a thin feeling arrival. Sweet and fruity. Brown sugar, vanilla, rum soaked raisins, sour cherry. Then dark chocolate and leather. Orange peel and walnuts. Mid palate there is a serious spice kick - clove oil, black peppercorns and fresh oak.
Finish: medium length with cocoa powder, orange oil and rum and raisin ice cream.
Overall:
Let's start at the start then and the entry level 10 year old. This is an absolute joy! Well balanced, well composed and with a great amount of complexity. For the money this is an absolute steal. If it could be released to this standard every time I personally don't think you'd need to buy another whisky.....it would be Scotland's equivalent to Redbreast 12 year old. But then again Springbank 10 always has Kilkerran 12 to compete with over your entry level Scotch single malt affections. Saying that of all the Springers, I don't think I've ever had a disagreeable 10 year old yet.
The 12 year old Cask Strength is possibly one of the most sought after expressions from Springbank, especially due to it's value for money. Although priced at around £55 to £60 a bottle now it's really a wonder how they can do it at the price considering the crazy prices being charged elsewhere....oh, yeah, that's it, the guys at Springbank charge fair prices!
Anyway, this particular bottling was very good and just a little away from being great in my opinion. Once I had that cheesy note from the nose in my head I found it hard to get past. Plus there was also a distinct sulphur note there too. Palate wise it was just a little too hot and spicy and wood driven.
The 18 year old I have to say was poor. The nose was lovely, very inviting, but the palate was sharp, sour and just not that great. Certainly I'd have been disappointed spending £100 on it.
Finally the 21 year old. What a nose!!! Super fruity, sweet, spicy and engaging. You could literally spend hours nosing it. Palate wise though it was a little thin and while there was plenty of flavour it neither nosed nor drank like a Springbank. The casks had dominated massively and you'd have been hard pressed to tell that this didn't come from another distillery as that typical funk and sootiness was lost. While the flavours were nice you could get them elsewhere for much cheaper. It might have been a higher score if it didn't cost £200.
Scores:
Springbank 10 year old (2021) - 9 out of 10
Springbank 12 year old (2018) - 7 out of 10
Springbank 18 year old (2018) - 4 out of 10
Springbank 21 year old (2019) - 6 out of 10
Labels: 10 year old 12 year old 18 year old 21 year old Campbeltown Cask Strength Scotch Single Malt Springbank Whisky