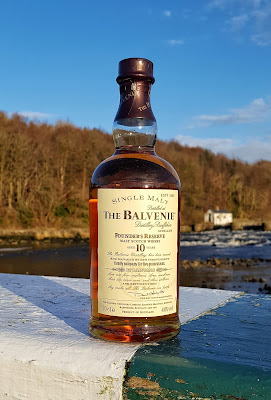 
The Founders Reserve is comprised of spirit that has been matured for at least 10 years in ex-bourbon casks and ex-sherry casks before being vatted together and then bottled, unfortunately I can find no information on what the ratio of bourbon to sherry cask is. It is bottled at 40% abv.

As I stated as the outset because this is no longer in production finding bottles in the wild is becoming harder and harder and due to its popularity the price has risen considerably. A bottle now could set you back between £90 to £150 depending on whether you find a bottle in an online auction or on a specialist whisky retailer website. Thankfully I bought my stash a considerable number of years ago at considerably less money than the figures quoted. 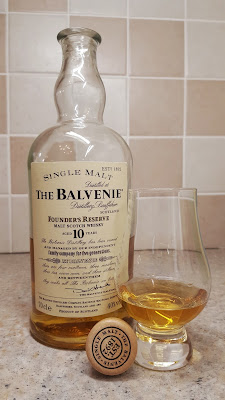 Medium, stays at the back of your throat with the spices and heat, surprisingly assertive.

I can really see why so many were disappointed that this was discontinued. Although bottled at the same 40% abv as the Doublewood 12 year old it is noticeably thicker and more viscous in mouthfeel. Although having a youthful bite the fact that is is comprised of malt spirit matured in both ex-bourbon and ex-sherry casks means that it is a more balanced but entertaining whisky than the Doublewood 12 year old with its short sherry cask finish. It isn't necessarily as smooth as what you would normally expect from Balvenie, but I find it all the more engaging for that. It has a lovely balance of sweet & heat, honey & spice and for that I would pick it over the Doublewood 12 year old every time. Unfortunately though as good a dram as it is, I do not think that it warrants the value that is placed on it in the current market.
Labels: 10 year old Balvenie Founders Reserve Scotch Single Malt Speyside The Balvenie Whisky