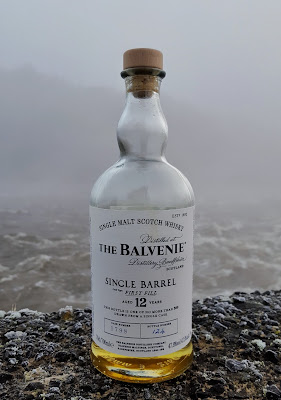 The core Balvenie range is renowned for its various cask finishes. You have the 12 year old & 17 year old Doublewoods that are matured initially in American oak ex-bourbon casks before being transferred for a short time into European oak ex-sherry casks. There is the 14 year old Carribean Cask which again is matured in the ex-bourbon casks before being finished in american oak casks that have held a blend of West Indian rums prior to the whisky. Finally you have the 21 year old Port Wood finish where the matured whisky is transferred to 30 year old port pipes.


This 12 year old Single Barrel is essentially the 12 year old Doublewood without the extra maturation in the ex-sherry casks. The spirit has been matured exclusively in first-fill ex-bourbon casks for at least 12 years before bottling. However, there are extra noticeable differences between the two expressions.

First, the Single Barrel in non-chill filtered. What does this mean I hear you ask? Chill Filtration is where the single malt spirit is cooled to zero degrees Celsius and the passed through a series of either metal meshes or paper filters under pressure. This is done to remove sediment and impurities picked up from the cask. It also removes proteins, fatty acids and esters from the spirit that occur naturally. In whiskies that are 46% or lower in abv, these constituent particles create a cloudiness in the whisky when water or ice is added. Some distillers see this cloudiness as a negative and so put their spirit through the chill filtration process to remove this issue. Others however argue that chill filtration degrades the aroma & palate of the whisky by removing these naturally occuring particles. Personally, I'm glad in this instance that Balvenie didn't tamper with the spirit.

Second, this expression has been bottled at 47.8% abv rather than the regular 40% abv so I would expect this to be a bit more punchy than the Doublewood.

Third, this expression is one bottle from no more than 300 drawn from a single cask. This means that each cask will give its own unique expression although there should be a similar flavour profile running through each batch. As you can see in the picture I have bottle number 124 from cask number 1798. I think it's a nice touch. 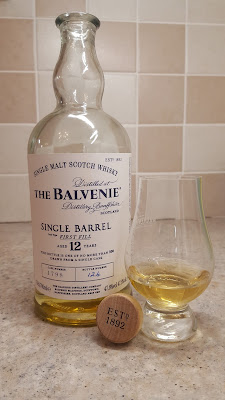 A long finish that is sweet & nutty.

I remember when I first tried this whisky I was a little underwhelmed. I didn't think it was as good as the 12 year old Doublewood. It is definitely a grower though and out of the core expressions that I own it is definitely my favourite now. It really allows the distillate to shine and is classic Balvenie, sweet, biscuity and honeyed. The non-chill filtration and the higher abv give this a much thicker, oilier mouthfeel to the 12 year old Doublewood. While it may miss out on the stewed fruits and heavier spices of the Doublewood, the nose & palate of the Single Barrel compliment each other much better.

If you like sweet, ex-bourbon matured whisky then you can't go far wrong with this one!