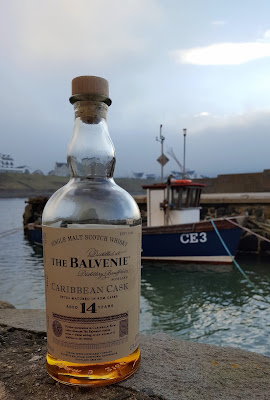 This expression has been matured in traditional oak casks before spending a few months in casks that previously held a Caribbean Rum blend chosen by Malt Master David Stewart himself.


Apart from the age, this expression differs from the Doublewood 12 in that it is bottled at 43%, a welcome sight. An unwelcome sight though is found on the back of the carton.....Balvenie use caramel colouring in it! Shame on you Balvenie! Why is this an issue? For some it isn't, the distilleries themselves will say that it is only used to keep batch colours consistent so a bottle of their product will look exactly the same no matter where you get it. Many consumers & producers though, do feel that adding e150 caramel colouring adversely affects the nose and palate of the product, especially when excessively used. A forthcoming review, I feel, pretty much proves this point. In the whisky market of today consumers place a large emphasis on provenance and would really rather have a product that is essentially as it came out of the barrel with no tampering afterwards, I mean do we really care if one batch is a shade darker or lighter than another? I for one certainly don't.

It would also appear to be chill-filtered.

So there we have 2 out of 3 of the unholy trinity of whisky evils present! I'll get onto the third one another time. 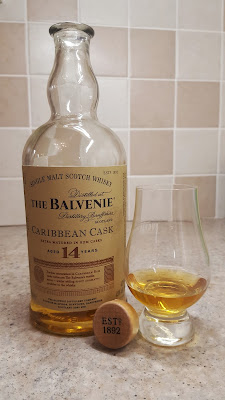 Initially mellow with vanilla & toffee leading to tropical fruits, coconut & pineapple with a slight alcohol burn at the end.

The palate doesn't quite match the nose - you have the usual Balvenie sweetness which then dries quickly with some peppery spice. The tropical notes hinted at by the nose don't appear. Body wise it has a thicker mouthfeel than the Doublewood 12 no doubt helped by the extra abv.

Medium finish to this expression - usual Balvenie sweet characteristics, warming and spicy but it has lost the fruitiness of the Doublewood 12.

It is a perfectly pleasant dram but it isn't going to set your world on fire. The rum certainly adds a bite more bit to the Balvenie character but I personally don't think it is as balanced as the Doublewood 12. I also wouldn't suggest it is worth the extra investment over the Doublewood 12 either.

Typically this sells for between £42 to £50 a bottle. For that money I would recommend looking elsewhere unless you really love the Balvenie brand. It it were my money I'd buy a bottle of Glenfarclas 15 which is an utterly superb dram!
Labels: 14 year old Balvenie Caribbean Cask Scotch Single Malt Speyside The Balvenie Whisky