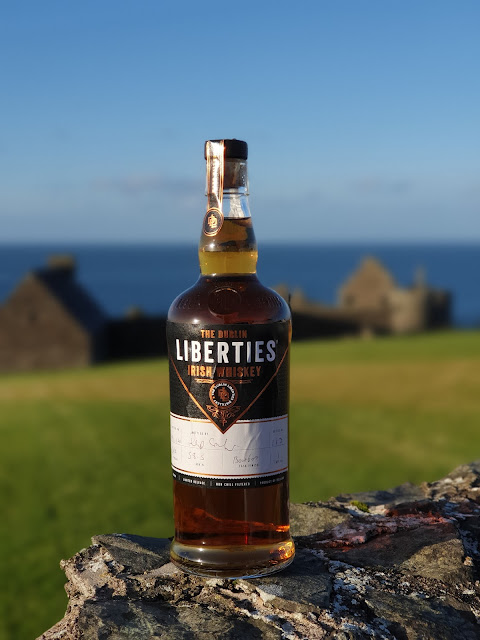 Welcome to review number 101 and a look through some of the random bits and bobs from my own bottles or samples I have received from generous souls.

I bought this on a visit to the distillery in January 2020 whilst visiting Dublin with friends from Miami. We actually didn't have time to tour the distillery as we went to Teeling instead for the tour (sorry DLD!) but I thought it would be rude and impertinent not to get a distillery exclusive from DLD, so I nipped round and picked up this punchy little number for I think €85.

Although it says 5 year old on the label I was told at the distillery that the liquid was actually around 6.5 years old but I can't remember why they didn't state it was 6 years old....possibly 5 is just a nicer number! Anyway full bourbon maturation and bottled at 58.5% abv from cask no. 1 and my bottle was bottle number 113 from that cask. It is sourced but there was no indication as to where it was sourced from. 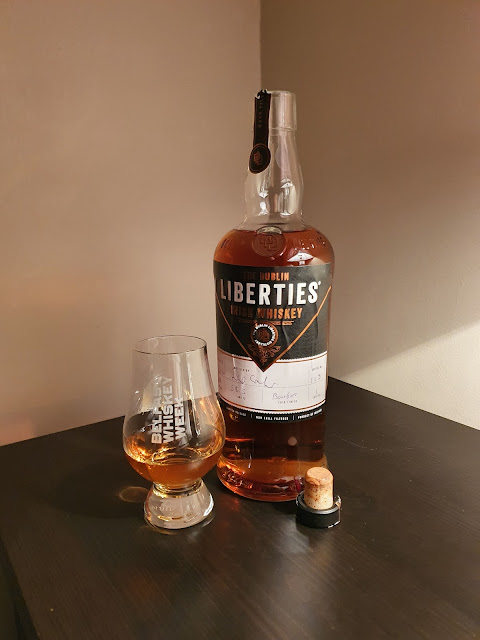 Nose: Initially a little spirity and prickly. Once settled we get toffee apples and pear tart. All butter pastry. Meringue with vanilla cream. Almond, peach and rice pudding. Toasted oak with sweet cinnamon. Water brings out more woody notes and some milk chocolate.

Palate: Very approachable at full strength. Straight away there's the toffee apples from the nose, a bit of ripe banana and peach too. Buttery digestive crumble and a load of vanilla. Wood spice grips mid palate with pink peppercorns and clove rock. Towards the back of the palate there is a hint of pencil lead. Water brings out more clove, nutmeg and cinnamon although it does lose some mouthfeel.

Finish: A little short in all honesty with sweetened condensed milk and toffee apple lingering. 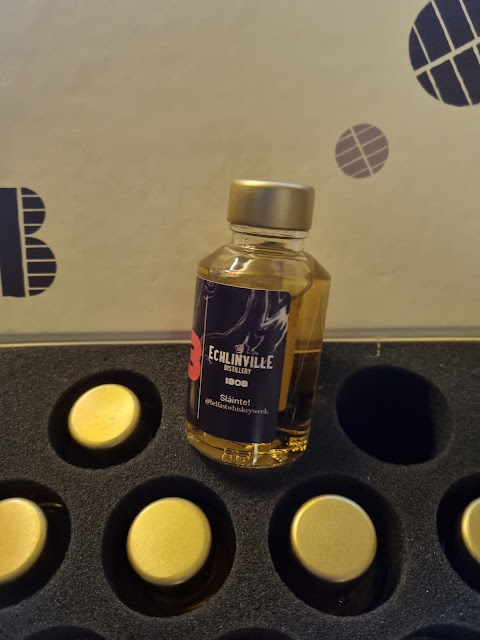 Dunville's latest entry into the frankly 'bursting at the seams' blend market of Irish whiskey. This iteration is a blend of grain whiskey, two different malts of which one is peated and pot still whiskey. it's bottled at 40% and will set you back around £33 from the distillery shop. My sample came courtesy of the Belfast Whiskey Week Bonus Box. 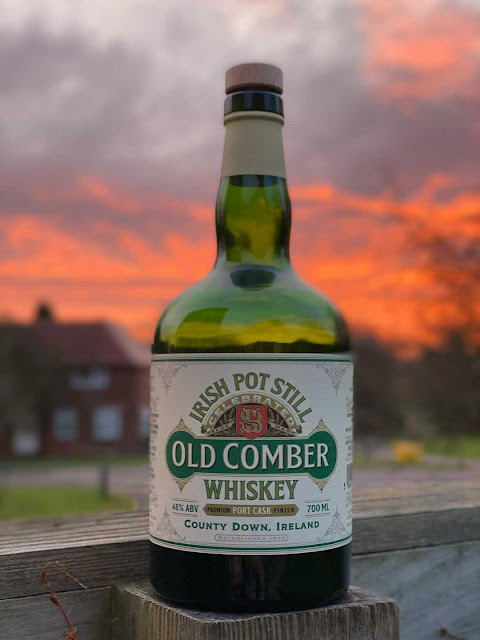 After a 70 year hiatus the good folk at Echlinville Distillery have resurrected the Old Comber brand with a blend of Pot Still whiskies (of which includes some of their own spirit) that have been aged in American Oak and Bourbon casks before being finished in Ruby Port Casks. Allegedly the spirit in roughly 6 years old and will in time be a 7 year old release, harking back to the original Old Comber 7 year old release, although I'm not sure if there are plans to have an age statement on the label at that point. It's bottled ay 46% and retails at £45 if you can get a bottle......this stuff sells out fast and I'm yet to be quick enough off the mark! Thanks to Dave Cummings for the sample and the photograph.

Palate: A nice oiliness to this. Sweet and spicy. Apple and pear tart tatin with butterscotch sauce. Cinnamon, nutmeg, pepper and ginger heat grip the side of the tongue before releasing into vanilla sponge cake with raspberry jam, milk chocolate buttons and juicy, fresh raspberry and strawberry. 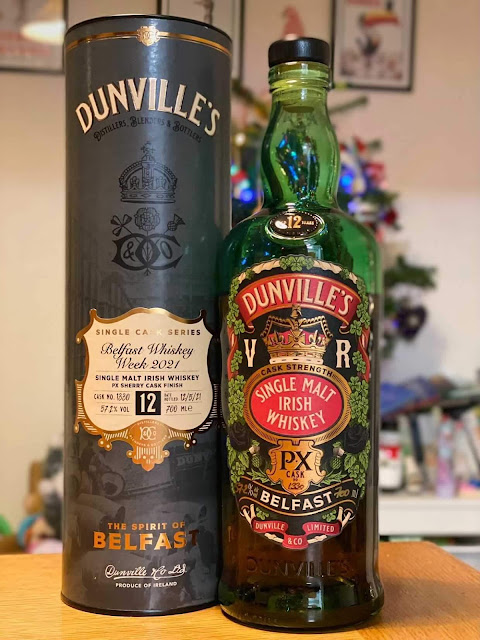 An exclusive release for the Belfast Whiskey Week 2021 festival of all things whiskey related. Bottled at 57.2% with an outturn of 310 bottles. Dunville's call this a finish but in reality it's a double maturation with the spirit having rested in the PX cask for between 2 to 3 years. On release this was £125 but making more at auction these days if you're interested in trying to acquire a bottle. Thanks again to Dave Cummings for the sample and the picture.

Palate: At full strength I found this a little closed. Lots of brown sugar, raisins and sticky dates. Then a big, big spice kick of clove, peppermint and chilli. Water does open things up better now with stewed apples, orange peel, peach and espresso. 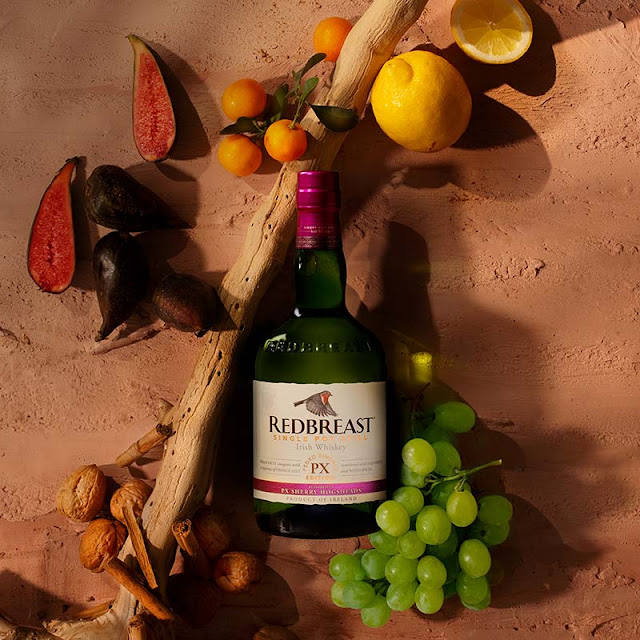 A limited edition from Midleton that got all the Redbreast fans in a fluster and is now like hen's teeth in Ireland except, it seems, at The Loop Duty Free in Dublin airport which has loads of the stuff. Costing £72 a bottle and released as part of the Iberian series this follows the Lustau Edition formula of being matured in both bourbon and oloroso sherry casks being being transferred into PX hogsheads for at least a further 12 months maturation. Bottled at a healthy 46% abv. Thanks to Dave Cummings aka @the_mash_upper for the sample.

Let's kick things off with the DLD 5 year old. It's a fairly straight forward affair that has quite good balance between nose and palate but with a slightly limited flavour development. It's definitely a good session dram to share with mates alongside a pint of stout. That said I've worked my way through most of the bottle without much complaint, maybe that it's just a little pricey for what it is.

So Dunville's have again entered the blend market which I find interesting considering they already have Three Crown's and Three Crown's Peated so I'm not quite sure what the need is for the 1808. I mean it's alright but not particularly interesting enough to make me consider purchasing a bottle. In fact if you want a hint of peat the Three Crown's Peated does the job much more successfully. Looking outside the brand it would be hard to look past the Dark Silkie as a much more engaging alternative.

The Old Comber next. Honestly, I think Redbreast 12 year old has very real competition now at the price point, in fact I'd go so far to say I'd happily plump for the Old Comber over it. It's slightly younger but that doesn't come across in terms of mouthfeel, nose or palate at all. Really superb stuff from the lads at Echlinville and I can see why it never hangs about long on release.

The Belfast Whiskey Week Dunville's PX cask strength has an absolutely belter nose, really fantastic, one to nose for hours. Unfortunately the palate, especially at full strength, just didn't live up to it. At full strength I found the palate a little cask dominant and pretty spicy. A little water is definitely need to open things up and release some fruitiness from the Cooley distillate which restores some balance to proceedings.

The Redbreast PX Edition is easy to sum up - cask dominated. This is very much a dessert dram and one for all you out there with a sweet tooth. As ever the nose is a thing of beauty. Billy and Dave down at Midleton sure know how to concoct engaging noses with whiskey. But for me, especially as I don't have a particularly sweet tooth, it's the palate where this falls down. It's just too sweet. The use of smaller hogsheads over butts means the PX maturation has just taken over proceedings to the point that I can't help but think you'd be better just buying a bottle of PX instead.