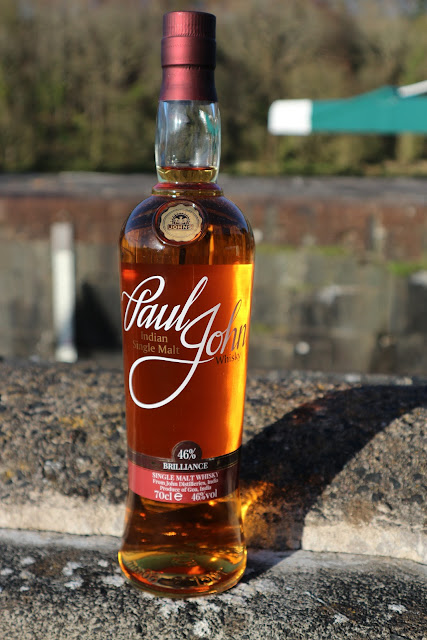 When you think of whisky producing countries who immediately springs to mind? Probably the powerhouse triumvirate of Ireland, Scotland and good ol' U.S of A are the first stops on your whisky production world tour. This is perfectly understandable as for years they have been the big three, remaining pretty much unchallenged and so when you visited your local supermarket or bottle shop you were likely to be greeted with American, Irish and Scotch whiskies as your purchasing options. It has only been in the last decade that Japanese whiskies started coming to the fore and forged a place at the top table.


And to be fair, much of the whisky produced outside of the Big 3 didn't really garner much of a reputation for quality for a long time, more experiments with potential than actual threats to the establishment.

But as Bob Dylan so eloquently croaked, the times, they are a changin'. The thing is that when you have no competition things can become a bit stale. Being so dominant meant, and still means that sometimes quality can drop but the liquid will still sell just because of a brand name. Glenlivet, Jura, Highland Park...I could go on.

World whiskies as they are affectionately known, ie: those not of the Big 3, are catching up, have caught up and often are surpassing what is produced from the Big 3.

Whisky is now being produced in South America, South Africa, Pakistan, Iceland, Sweden, The Netherlands, Taiwan....the list goes on and is growing.

So the whisky we are reviewing today comes from India, and Goa to be exact. Paul P John founded his distillery in 1992 and their biggest seller is a blend called Original Choice. It is made from neutral alcohol distilled from molasses blended with malt whisky. As of 2015 it is the 8th most sold whisky in the world. Not bad eh?

The single malt distillery was set up in 2007 with their first single malt released in 2012. The two original core bottlings arrived in 2013. The Brilliance which we have here which uses Himalayan six-row barley for malting, is unpeated and matured in ex-bourbon casks. The Edited uses a small amount of peated barley, around 20-25ppm, from Scotland in the mix and is also matured in ex-bourbon casks. In 2015 the third instalment of the core range was added, The Bold. This again uses all Indian barley but is peated with Islay peat to around 25ppm.

All these whiskies are no-age-statement and will be young, maybe around 5 years old or younger. But due to the climatic conditions in Goa maturation happens a lot quicker than in Ireland or Scotland. Paul John may lose 10% of a casks volume per year to the Angel's share compared to the average of 2% in Ireland and Scotland. Therefore there is a lot of interaction between spirit and the cask.

The Brilliance, like the Edited and Bold is bottled at 46% abv and is non-chill filtered. There is no mention of being natural colour but I'd wager there is no trace of the dreaded e150 here.

This bottle cost €39.99 from www.whiskysite.nl but can be found at www.masterofmalt.com for £35. It was bought for my bottle share club. 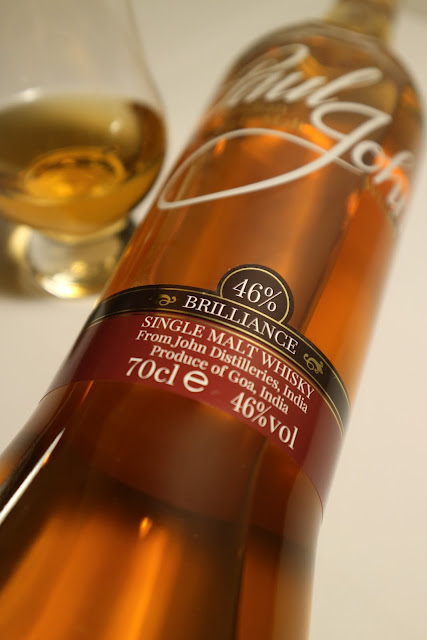 This really kicks the nosebuds - a hard hit of pine resin and spice. Barley, ryvita, honey coated apples, beeswax, pot-ale and a touch of copper. Water intensifies the barley, pot-ale and beeswax notes and slightly reduces the levels of spice.

There is a Demerara sugar sweetness straight off the bat. Honey, vanilla, oak then candied orange peel and a massive chilli heat kick. It's nearly rye like, but a bit sharper. Chocolate, caramel and a light musty, earthy note to finish. Water actually intensifies the chilli flake spice and chocolate notes.

I really enjoyed this I have to say. It's very different to anything you'll find on the supermarket shelves and it offers good value for money in comparison to much of the benign and dull offerings you will find there. It's well balanced between nose and palate and delivers flavour in spades. Recommended.
﻿