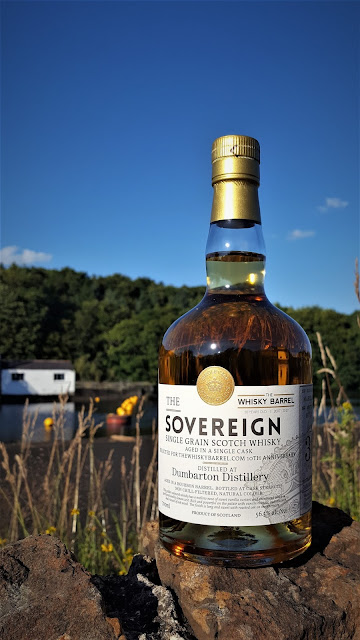 Supermarkets. We all use them as the kings of convenience in our busy lives and while we are there why not see what the well stocked off-licence has to tempt us with. Of course while supermarkets are incredibly convenient, they are not interested in individuality but rather high volume sales. When embarking on your first forays into whisky a supermarket off-licence isn't the worst place to start as generally they offer reasonable products at reasonable prices. But as we grow in our whisky enthusiasm supermarkets and their mostly dull offerings are outgrown and we start to search further afield for new experiences.

Next stop - local speciality stores. My local speciality store here on the Causeway Coast is Fairleys in Coleraine and I can thoroughly recommend a visit. They stock a fine selection of wine, fortified wines, craft beers, gin (I suppose I can overlook this blot on their copy book) and over course whisky. In fact I don't think I have been in a shop in Northern Ireland that is their equal selection wise. It was through Fairleys that I was introduced to independent whisky bottlers in the form of the excellent W.M. Cadenheads, which has in turn piqued my interest in other independent bottlers. But as good as Fairleys are, they have their limits on shelf space and ability to stock as many products as my whisky OCD would ideally like! This takes us to step 3. Online specialists.

In the online world The Whisky Exchange and Master of Malt would be the preeminent players. Both having mind boggling selections that tug at your credit card. I however have one major problem with them.....their shipping costs. Mainland UK delivery is £4.95 which is pretty reasonable. Want to ship to Northern Ireland? No problem just add an extra £5 to the shipping price (which adds a significant premium to your bottle of choice)! For this reason and this reason alone I have diligently looked elsewhere to satisfy my cravings when Fairleys couldn't scratch the itch. This search led me to stumble upon The Whisky Barrel who have a very reasonable shipping rate of £2.99, even to Northern Ireland which leads me to question why the big players have to rip us off with their shipping over here! Plus I must say the service from the Whisky Barrel has been excellent. As it happens, my discovery of The Whisky Barrel also coincided with their 10th anniversary of online trading and the subsequent release of specially selected single cask bottlings to celebrate their web based longevity.

The first release was a Cooley 13 year old bottled for The Whisky Barrel by The Creative Whisky Company. Matured for 13 years in a bourbon barrel and then given a 2 month finish in a sherry hogshead which provided 180 bottles at 52.7% abv and cost £49. The second release was from the closed Dumbarton grain distillery and bottle by Hunter Laing & Co. Matured in a bourbon barrel for 30 years producing 197 bottles at 56.5% abv and costing a very reasonable £87. A 30 year old whisky from a closed distillery at under £90! Amazing. The third release was a 6 year old Laphroaig fully matured in a sherry cask by The Creative Whisky Company. You can read my notes on that particular release in a triumvirate piece on Malt. 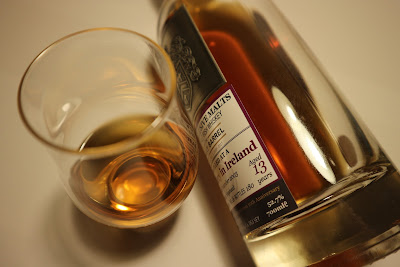 A medium body, not overtly oily in the mouth even with the high abv. Caramelised apples, pineapple syrup tinged with clove oil and baking spices. Some sherry nuttiness with the coffee grounds adding a little bitterness. Water accentuates the toffee with dark chocolate notes and more coffee.

A really good Irish dram full of flavour and character and well worth the entry fee of £49. In fact it makes me wonder why Glendalough are charging £65 for their 13 year old when it is Cooley juice and bottled at 46% abv. If this is still in stock I recommend you take a punt on this, I doubt you will be disappointed. 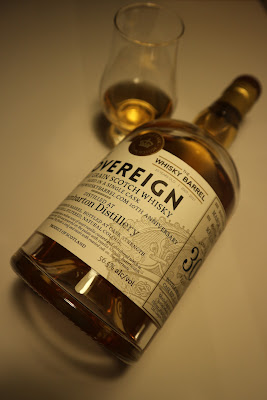 A lovely velvety mouth feel that caresses the tastebuds with vanilla, lemon zest, sherbet dip, golden syrup, a kick of oak and cask char. Water heralds honeycomb, butterscotch but with the cask presence there to balance the sweetness.

A superb grain whisky that shows how grain really benefits with long maturation and when treated right is an equal for any malt whisky.

The Whisky Barrel deserves a lot of credit for selecting these particular whiskies and they are a fitting way to celebrate their online presence for the last 10 years (even though I'm a relatively new customer). It is hard to pick a favourite of the two but I would say the Cooley just takes it by a whisker. I am however very pleased that I got to appreciate both of them and in particular I'm amazed that The Whisky Barrel could put out the Dumbarton at that price. Malts of equivalent age generally make your wallet wilt in embarrassment at the prices commanded. Unfortunately the Dumbarton has subsequently sold out now, but at that price and when it tastes so good I'm not really surprised.